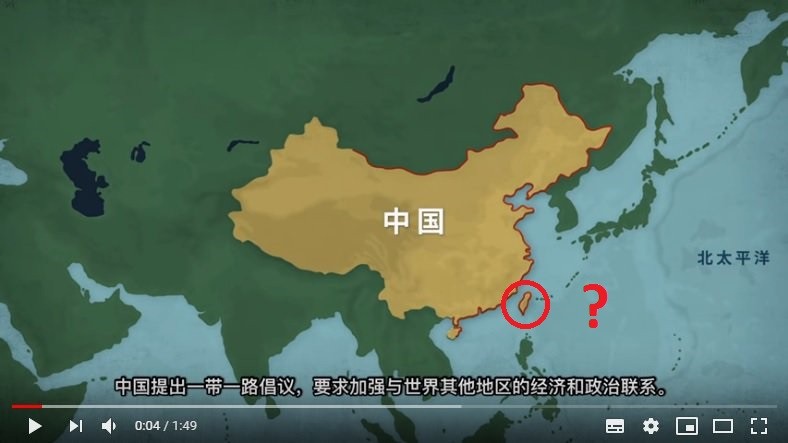 TAIPEI (Taiwan News) -- The U.S. State Department has blundered in its attempt to counter Communist Chinese propaganda about its Belt and Road Initiative (BRI) by falling for Beijing's mantra that "Taiwan is part of China."

In a textbook case of a public relations failure, the U.S. State Department has created a video designed to warn countries of the dangers of China's debt diplomacy through its BRI, only to leap into the arms of Beijing's disinformation machine by erroneously including Taiwan in a map of China.

In the video, produced by the U.S. Department of State Bureau of International Information Programs, a map of China is presented which clearly outlines its boundaries in red and includes Taiwan both within this boundary and fils it in with the same color as China.

The video editors took great pains to include Chinese subtitles and label key geographical features in simplified Chinese characters. Given this attention to detail on the map, it is all the more strange that Taiwan is lumped in with China.

The video skips over the actual routes of the "belt," which is China's Silk Road Economic Belt (SRB) and the "road," which is the 21st Century Maritime Silk Road. The video only lists the one case of Equador's hydroelectric dam to illustrate an example of Beijing's debt trap, missing an opportunity to mention the existence of scores of similar projects across the planet.

The video rightly cites the summary of an independent report titled "Grading China's Belt and Road" as saying that the liabilities of such pacts with Beijing leads to "loss of control, opacity, debt, dual-use potential, and corruption." However, it fails to mention a similar report on U.S. aid policy or list examples of positive outcomes of U.S.-funded projects.

Most egregiously, viewers come away with the following false conclusions about Taiwan: Taiwan is part of China, Taiwan is part of the BRI. In fact, Taiwan is a sovereign, independent nation with its own constitution, currency, army, free press, and democratically elected government.

Instead of the BRI, Taiwan has its own rival development policy called the New Southbound Policy (NSP). This policy has resulted in billions of dollars of increased trade between Taiwan and 18 countries in Southeast Asia, South Asia, and Australasia.

The inclusion of Taiwan as part of China is also counter to the Trump administration's stance on the matter. On May 6 of last year, White House spokesperson Sarah Sanders responded to attempts by Beijing to force private companies to list Taiwan as part of China as "Orwellian nonsense and part of a growing trend by the Chinese Communist Party to impose its political views on American citizens and private companies."