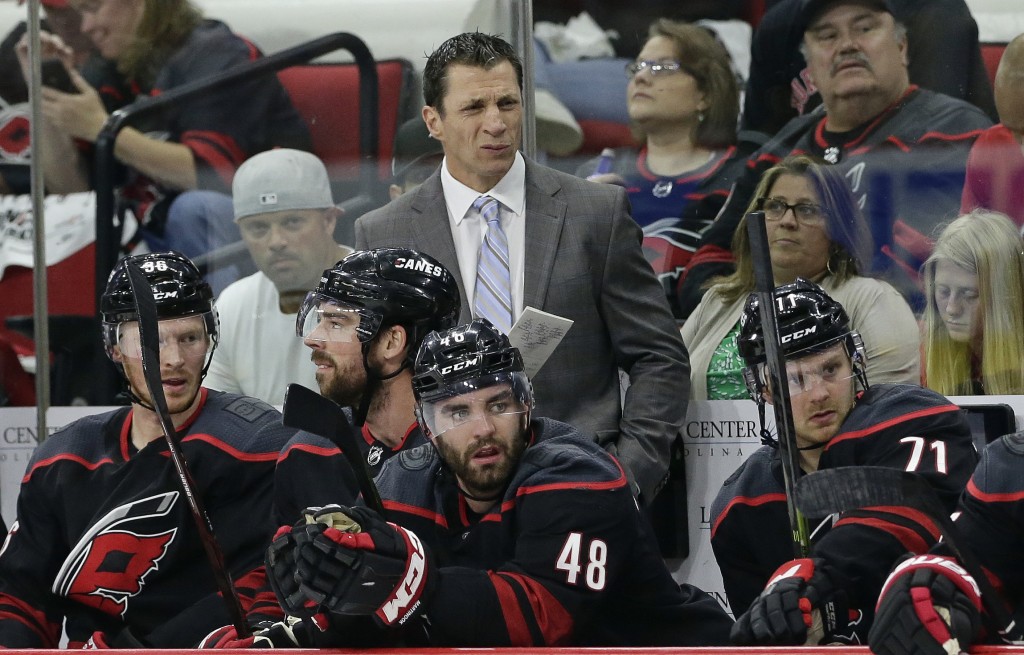 RALEIGH, N.C. (AP) — The Carolina Hurricanes haven't made the playoffs often. When they do, they stick around for a while.

This is just their fourth postseason appearance since 2002, but they reached the Eastern Conference final — at least — in each of their last three appearances and are one victory against the New York Islanders from a fourth.

"I think when you don't make the playoffs for so long," coach Rod Brind'Amour quipped Thursday, "you're probably rested."

The common denominator in those deep postseason runs has been Brind'Amour, who has climbed nearly every branch of the organization's tree during almost two decades in Raleigh.

The first Carolina player to hoist the Stanley Cup has the Hurricanes nearly halfway toward doing it again, this time in his rookie season as their head coach. Carolina will go for a second-round sweep in Game 4 against the Islanders on Friday night (7 p.m. EDT, NBCSN).

"We didn't have much of an identity at the start (of the season), and over the years, and really, Roddy has demanded that from the start," veteran forward Jordan Staal said. "Our identity has got to be our work ethic, and all else kind of falls to the side."

There aren't many common threads through the past 17 years for the Hurricanes during their up-and-down stretch marked by a handful of peaks and several valleys — including a nine-year postseason drought that ended this year. They've changed owners, general managers, coaches, captains and players — lots of them.

Brind'Amour has been the constant, arriving in 2000 in a trade with Philadelphia and never leaving.

He's played a central role in each deep postseason run. He was an alternate captain on the 2002 team that improbably reached the Cup final. He captained the team four years later that won the Cup for the only time in club history. In his final full season wearing the "C," he led the Hurricanes to the 2009 Eastern Conference final.

After retiring, he spent some time in the front office and as an assistant coach before he took over when Bill Peters left for Calgary last summer — and led them to this: With one more victory over the Islanders, the Hurricanes will have won 11 of their last 13 playoff series — losing only to Detroit in that '02 final and to Pittsburgh in '09.

Carolina has won five straight postseason games and seven of eight since losing the first two matchups with Washington in the first round.

Islanders coach Barry Trotz, who graduated less than a decade before Brind'Amour from the same Saskatchewan high school, sees the Hurricanes reflecting their coach on the ice, finding a way to win every game so far in a series that's been tight despite the 5-2 final in Game 3 on Wednesday night.

Neither team has led by more than one goal at any point in the series until Carolina scored two empty-net goals in the final minute of the last game.

"Everything I've heard about Roddy and the people that play with him and the people that worked with him, he's a genuine, hard-working guy," Trotz said. "That's probably our teams. They're a hard-working team, they get on you, they're resilient. And these two teams have a lot of characteristics that are very similar. That's why it's been not a lot of goals. It's been a grind for both teams and it will continue to be."

Blues rookie goaltender Jordan Binnington responded to a stick poke from Jamie Benn by delivering a forearm to the head of the Dallas Stars captain right as the second period ended in Game 4.

The game was effectively already over then, with the Stars up three goals and on way to a 4-2 victory to even up the best-of-seven Western Conference semifinal series.

"Sometimes the game is not going to go your way," Binnington said. "It's playoff hockey and stuff happens to try to change the game up a little bit and see what happens."

Binnington sparred with Benn not long after Blues forward David Perron, who had an earlier shot ricochet off the left post, hacked Stars goalie Ben Bishop in the back behind the net. Said Bishop: "Obviously a series can get emotional."

"I thought they lost a little bit of their emotional control but they played well in the third period and regrouped well," Dallas rookie coach Jim Montgomery said of the Blues. "I think next game we start fresh. I don't think there is carryover from one game to another. I don't think it really exists."