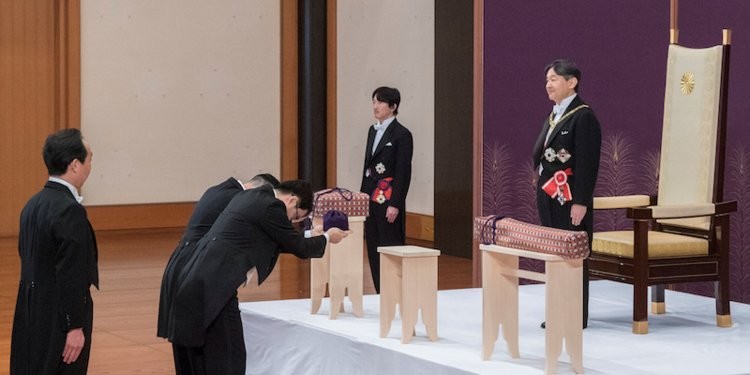 TAIPEI (Taiwan News) – On May 1 in the Pine room of the Imperial Palace of Tokyo, the new Emperor of Japan, Naruhito (德仁), accepted the imperial regalia and gave his first address as Emperor to mark the beginning of the Reiwa (令和) era.

In his first statement as monarch, Naruhito pledged to follow in the footsteps of his father, to promote peace, and to “act according to the constitution.” However, the wording of his pledge regarding Japan’s pacifist constitution has stirred some speculation over his precise meaning.

Some scholars, like Jun Okumura (奧村純) at Meiji University, suggest that Naruhito’s first address as monarch confirm that he is opposed to constitutional revisionism, and finds himself at odds with the conservative cabinet of Prime Minister Shinzo Abe.

Abe, representing the leadership of the Liberal Democratic Party (LDP) has been campaigning to amend the Japan’s pacifist constitution, adopted in 1947 following World War II, in order for Japan to re-establish regular standardized armed forces.

According to a Liberty Times report, in the past Naruhito has been vocal about his opposition to altering the constitution. According to scholars like Okumura, there Naruhito’s address at the start of his reign signals opposition and some distance between the Prime Minister and the royal household.

However, a Japan Times report notes that Naruhito’s statements were almost certainly reviewed by cabinet officials before the new Emperor’s inaugural address.

Therefore, in his statement that he would act “in accordance with the Constitution” was likely chosen as an acceptable neutral expression, since it does not intone opposition to the possibility that the constitution may be amended.

A historian and former president of Kanagawa University, Michio Nakajima (中島三千男) contrasts Naruhito’s pledge to “act in accordance with the constitution”, to his father’s pledge upon being enthroned in 1989 to “protect the constitution.”

Nakajima suggests that the word “protect” would not have been approved by Abe and the current cabinet, thus the more neutral phrase was chosen, reports Japan Times.

Currently, Japan only maintains a “Self Defense Force” (JSDF) which some already criticize as being in violation of the country’s pacifist constitution. Despite not being designated as a standing military, Japan’s annual budget for the JSDF is the ninth largest military budget in the world.

As Japan begins to confront the threat of a rising China and the possibility of a diminished role of the U.S. in the Indo-Pacific, many inside and outside of Japan have suggested that it may soon be time for the country to revise its constitution, in order to better prepare Japanese society and the region with a capable military force to balance that of China.