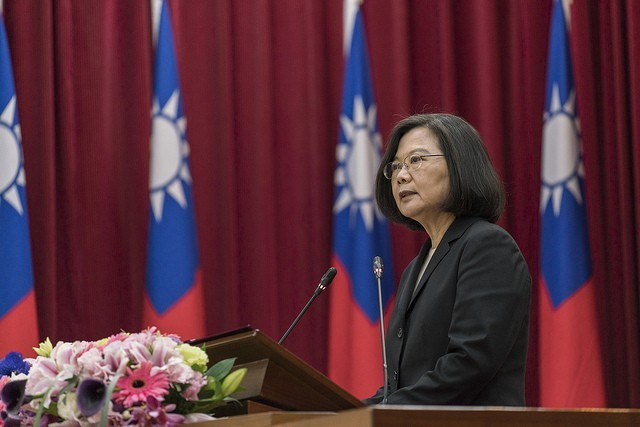 With decision-time edging ever closer for both the Democratic Progressive Party (DPP) and Kuomintang (KMT), the question of who the two parties will nominate as their presidential candidates is on everyone’s mind.

The KMT is doing everything it can to get Kaohsiung mayor and pro-Beijing populist Han Kuo-yu (韓國瑜) on its ticket. They have even changed the rules to get Han on the list, despite his refusal to participate in the existing primary process for fear of losing.

This move has inevitably appealed to his egotistical nature and he has now said that he will “respect” any “arrangement” the KMT agrees. In other words, “Anoint me as leader without any sort of democratic challenge and I will run.” It is a fitting stance for a politician with such close ties to the authoritarian Chinese Communist Party (CCP) to take.

But with Han likely to end up as the KMT candidate and continuing to poll well despite his frequent gaffs, illicit meetings with the CCP, and the absence of any achievements whatsoever during his time running Kaohsiung, the onus is on the DPP to ensure they get their primary process right.

This is proving to be extremely difficult because sitting President Tsai Ing-wen (蔡英文) is understandably reluctant to face the ignominy of not having the opportunity to run for a second term.

She has good reason for this because on close analysis she has done a lot of good things and not too many bad ones. Her refusal to be bullied into accepting the fake 1992 Consensus as a basis of relations with Communist China is a stance that is supported by most Taiwanese people.

Her Southbound Policy has enjoyed some notable successes in redirecting the country’s economy away from China and towards Taiwan’s other regional neighbors. Her tourism policies have weathered the storm of China’s refusal to sanction travel to Taiwan and seen numbers grow every year, with a more diverse range of people visiting Taiwan.

But, while her policies may be working, where she has really let herself down is in her communication.

While the Southbound Policy is working and laying the bedrock for a bright economic future, many Taiwanese people believe the economy is in the doldrums because of Tsai’s refusal to engage with the CCP and accept their terms. This view is encouraged by Taiwan’s largely pro-Chinese mainstream media.

On the flip side, while pro-unification supporters believe she has alienated Communist China, pro-independence supporters feel she has not been tough enough. It is only since the disaster of the nine-in-one elections last November that Tsai has strengthened her stance against China and for many, this is too little too late.

Without a doubt, the biggest communication failure has been over public sector pensions reform. This was an economic reform that was long-overdue and unavoidable.

The previous KMT president Ma Ying-jeou (馬英九) is reported to have said as much to her when handing over. He managed to avoid the political fallout such a move was inevitably going to lead to. Tsai has not had such a luxury.

The reforms have been disastrous for the DPP and more specifically for President Tsai personally. While the DPP has long been viewed as the enemy by many public sector workers in Taiwan, there is no doubt they blame Tsai personally for taking money out of their pockets.

Speaking to the very voters in Kaohsiung who ousted the DPP after more than 20 years in office, there was little doubt they saw the result as revenge on Tsai for depriving them for what they believe was rightfully theirs. They are still far from satisfied and most will back Han or any other KMT candidate if it means getting Tsai out of office.

There are a multitude of different reasons why things have got to this point but a crucial one is of Tsai’s own making. She fundamentally failed to explain the reasons for her pension reforms and why she had no choice but to bring about reform.

Rightly or wrongly, things have got personal and this is reflected in Tsai’s approval rating and her polling. Ahead of the 2020 presidential election, poll after poll has shown Tsai losing to whoever the KMT put up against her. Significantly, they also show her polling less than her rival for the DPP nomination rival William Lai (賴清德).

At some point, these figures have to be taken seriously and when they are, President Tsai has a big decision to make. What matters more? Her own career and ambition, or what is right for her country?

It is a decision of fundamental importance to the future of Taiwan. The KMT is almost certain to put up a pro-Beijing candidate with policies that threaten the very existence of Taiwan.

Both Han Kuo-yu and his high-profile rival Terry Gou are unashamed advocates of handing Taiwan over to China under the deeply flawed ‘one country, two systems’ model which has done so much damage in Hong Kong. They present a real and present danger to Taiwan’s national security and its hard-earned democracy.

The priority of Tsai, Lai, and everyone at the DPP has to be stopping these people from getting into office. If doing that means President Tsai should step aside in favor of William Lai, then this is exactly what she should do.

During her time in office Tsai has conducted herself with dignity in the face of horrendous abuse and criticism. She has quietly and assuredly delivered a great many positive things for Taiwan. There is little doubt that history will reflect positively on Taiwan’s Tsai years.

But in the bloody cut-and-thirst of modern politics that may not be enough. The blunt truth is that there is a significant proportion of the Taiwanese electorate who might vote for the DPP, but not while Tsai Ing-wen is in charge. It is quite possible this group could decide the outcome of the 2020 presidential elections.

Tsai may feel many people’s view of her are wrong. She may feel hard done by. But this is the moment when her dignity and commitment to her country will come into the sharpest focus.

It is time for President Tsai to do what is right by the people of Taiwan. Her choice is simple. She must either stand aside in favor of William Lai now, or else provide a fair, open, and democratic process by which her party can choose the person they feel has the best chance of winning next year’s election and keep Taiwan safe from the threat of KMT candidates.