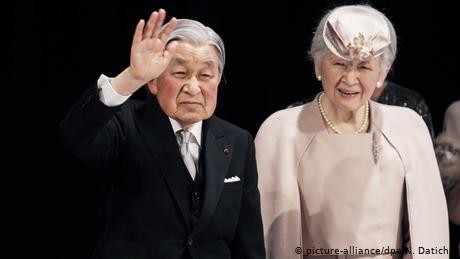 After 30 years, the reign of Emperor Akihito came to an end in a brief, dignified ceremony. It may sound overly dramatic, but the emperor's abdication represents a turning point — and not only for Japan, but for its neighbors, as well, including former war enemies with whom the country has yet to fully reconcile.

Akihito was a man of few words. Japan's royal family does not celebrate splendor like Europe's monarchies do.

The emperor, or tenno, was a staunch advocate of Japan's pacifist constitution, which — following the disastrous reign of his father, Hirohito, who had been revered like a god during World War II — no longer grants the emperor any political power, but defines him only as a symbol of the unity of the nation.

Akihito avoided publicly debating the nationalists, but he would not allow himself to be taken in by them either. He dismissed as a bad idea their demand that the national anthem be sung every morning when the flag was raised. He even mentioned the existence of a Korean ancestor in Japan's imperial family, which so meticulously guards its lineage. The nationalists were up in arms when, in 1992, Akihito became the first tenno to visit China, where he offered words of regret for the suffering people there experienced under his father. He found comforting words in Okinawa and Saipan, where many thousands were killed in the last months of the war. Akihito's reign was referred to as "heisei," which means peace.

After the devastating 1995 Kobe earthquake and then again following the earthquake, tsunami and nuclear accident at Fukushima in 2011, Japan's people turned to the emperor and his wife, who kneeled and offered comfort. They showed as much compassion as the rigid corset of the court would allow.

There is little room for individual desires in what is said to be the world's oldest monarchy. Nonetheless, the tenno asked Michiko, a commoner whom he met on the tennis court, to be his wife. He was the first Japanese emperor to study at university, and he and Michiko raised their three children themselves, including his heir apparent, Crown Prince Naruhito.

Akihito presided over the economic recovery during the 1960s and '70s, followed by the golden 1980s, when the country's technology dominated and unimaginably wealthy Japanese went on shopping sprees worldwide. Then the real estate bubble burst — and Japan has still not fully recovered from the crash. Governments have come and gone, sometimes from year to year, but Akihito was always there, never intervening in developments. In good times Akihito seemed like a prisoner of the restrictive court ceremony; in bad times he embodied reliability.

Naruhito, who has so far has proved less charismatic, has expressed his intent to continue his father's popular style under the motto "reiwa" or "beautiful harmony." He, too, will have to resist being roped in by the nationalists. Naruhito comes across as comparatively modern and cosmopolitan. He also married a commoner: Masako, a former career official in the Foreign Ministry who studied at Oxford and Harvard. Clearly, however, Naruhito and Masako will find it difficult to cope with the pressures of the imperial court and a life determined by others.