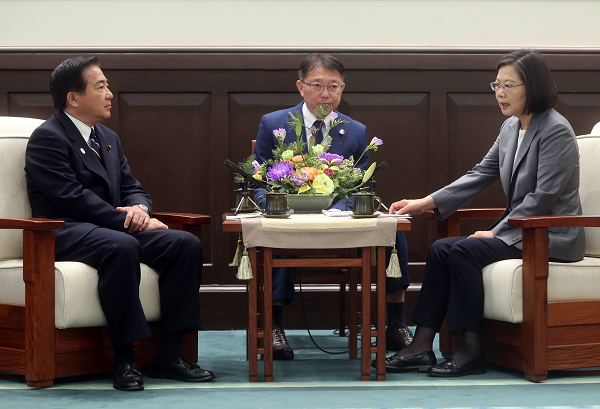 According to reports, Nagashima is in Taiwan to discuss matters related to the Japan-led Comprehensive and Progressive Agreement for Trans-Pacific Partnership (CPTPP), and to extend a message of support for Taiwan from the Japanese Parliament.

Nagashima is a long-time friend of Taiwan, according to President Tsai, and this visit to Taiwan is his 16th to the country.

He also heads a Parliamentary group dedicated to advocating for Taiwan in international affairs and for supporting Taiwan-Japan ties, reports Liberty Times.

President Tsai expressed her gratitude for Nagashima’s work and the Japanese parliament’s support of Taiwan, in addition to its recent condemnation of China’s increasingly threatening behavior.

Tsai said she hopes that relations between Taiwan and Japan will continue to strengthen in the years ahead, and that bilateral ties will contribute to maintaining peace and stability in the region. Tsai noted that cooperating on the CPTPP could be a key factor in improving ties, and creating prosperity across the Asia- Pacific.