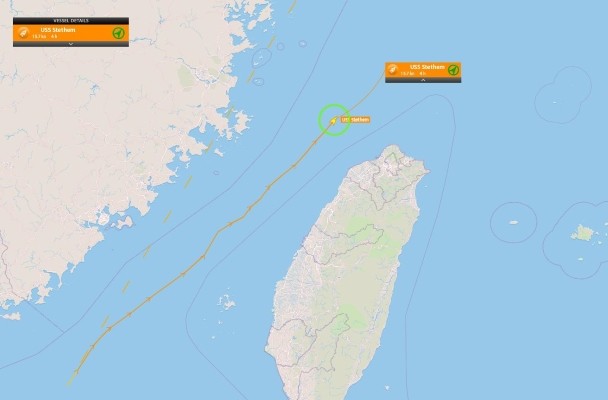 TAIPEI (Taiwan News) -- Two United States warships transited through the Taiwan Strait on Sunday (April 28), the fourth such mission by U.S. warships this year, but this time around, they were initially detected because they switched on their Automatic Identification System (AIS), an unprecedented measure, according to a military expert.

On Sunday, the USS Stethem was spotted on MarineTraffic, a global ship-tracking application, sailing from south to north through the Taiwan Strait. It was joined by a fellow Arleigh Burke-class guided-missile destroyer, the USS William P. Lawrence.

Lu Li-shih (呂禮詩), a retired lieutenant commander of Taiwan's Navy, told CNA that unlike previous missions when U.S. warships sent messages through the media or official channels as they passed through the Taiwan Strait, this time, they actively opened their AIS system to enable the public to track them on websites such as MarineTraffic and Fleetmon.

Lu said that according to the app, the two warships sailed from south to north to the east of the median line of the strait on Sunday afternoon. He said that they switched on the AIS system when they passed Taichung Port and turned it off when they were west of Fugui Cape, the northernmost tip of Taiwan.

Lu told CNA that according to the International Convention for the Safety of Life at Sea (SOLAS), military ships are not actually required to leave their AIS switched on at all times. As to why the ships turned on the system during the transit through the strait, Lu believes that the U.S. is wanting to emphasize the "right of transit passage."

He said that the U.S. is doing this to show that the Taiwan Strait is an international body of water by establishing a "habit of action."