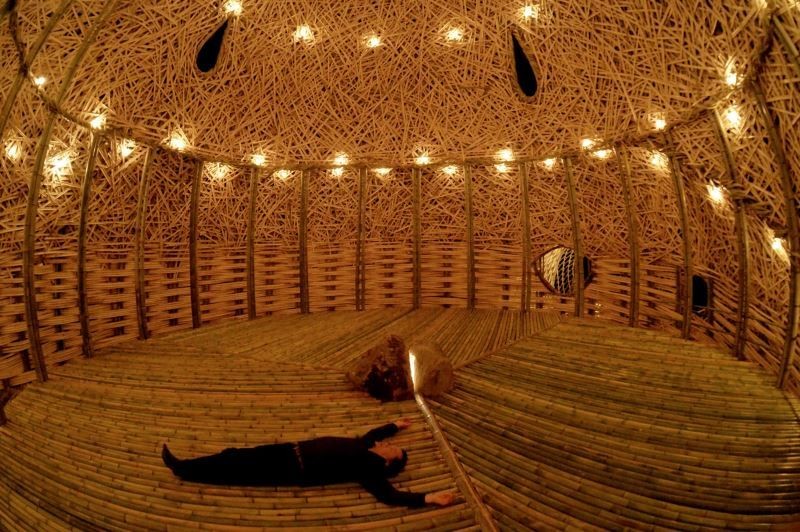 Sponsored by the Ministry of Culture, bamboo installation works “Love in Shodoshima” by Wang Wen-chih and “Beyond the Border—Wave” by Lin Shuen-long are on display at Shodoshima island, Kagawa prefecture.

Wang, who has participated in each edition of the festival since 2010, created “Love in Shodoshima” using traditional bamboo-weaving techniques. The artwork consists of three spaces representing his previous contributions to the triennale as well as the personal connections he has developed through featuring in the event.

As with Wang’s work, “Beyond the Border—Wave” was produced using bamboo found on Shodoshima. Erected on a beach, it comprises a bronze statue of a child standing in the water. Beside the youth is a sea urchin-shaped structure with a passageway leading to the sea, highlighting the fact that life came from the ocean.

This year’s Setouchi Triennale also includes the Vocal Asia Festival. Co-organized by Taipei City-based nongovernmental group Vocal Asia and the prefectural government, the event running Aug. 9-12 aims to deepen awareness of contemporary Taiwan music through an a cappella competition, forums and workshops, as well as concerts by such performers as indigenous singer-songwriter Sangpuy Katatepan Mavaliyw and O-kai Singers.

Wang Shu-fang, head of Taiwan Cultural Center in Tokyo, said that with the addition of the VA Festival, this year’s triennale features its largest ever number of Taiwan participants. This underscores the government’s commitment to providing further opportunities for Taiwan artists to showcase their talents on the international stage, she added.

Launched in 2010, the Setouchi Triennale aims to revitalize island communities on the Seto Inland Sea by gathering creators from across the world to collaborate with locals in developing art projects. It has three exhibition periods: spring, April 26 to May 26; summer, July 19 to Aug. 25; and fall, Sept. 28 to Nov. 4.