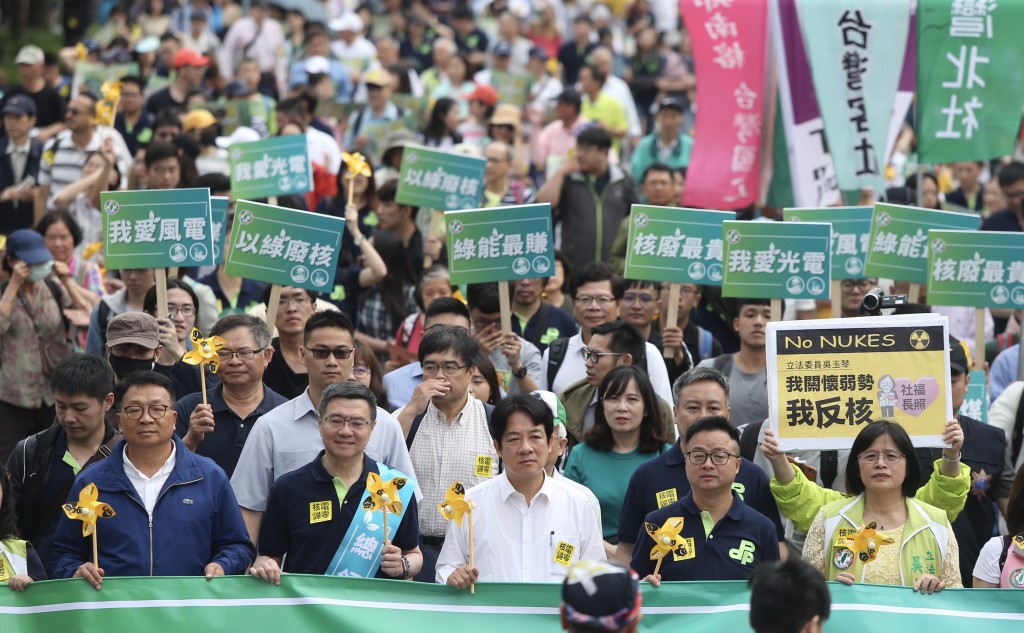 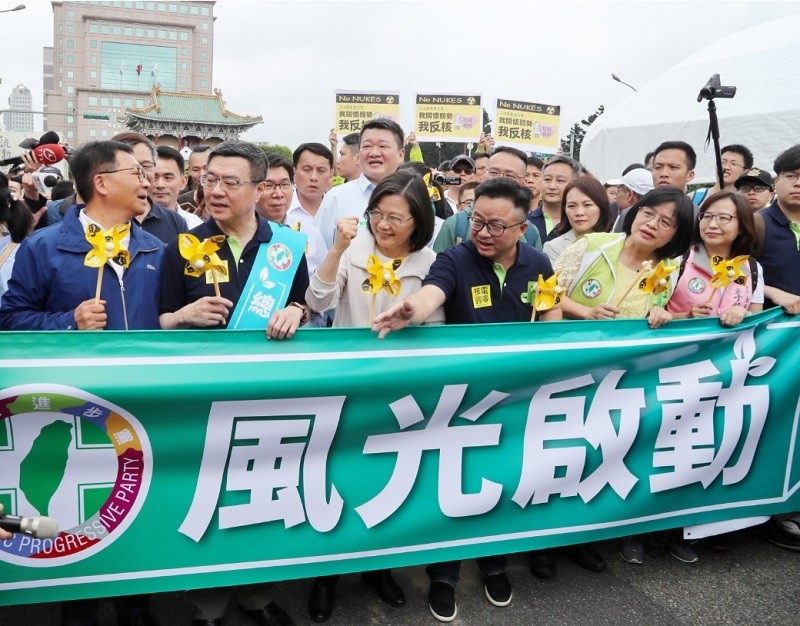 Led by the party’s Chairman, Cho Jung-tai (卓榮泰), the DPP showed up as a large group consisting of Secretary-General Luo Wen-jia (羅文嘉), and DPP city mayors and legislators to give support for the anti-nuclear power parade.

President Tsai appeared behind the DPP banner at around 2:20 p.m., shouting nuclear-free slogans and taking photos with Cho, Luo, and other DPP members. She briefly stayed there for five minutes and went off to take questions from reporters nearby, all the while without the presence of Lai.

It appears that the two carefully made sure to avoid confrontation in front of the cameras. Approximately 10 minutes after Tsai left, Lai join the DPP group and conducted the same slogan-shouting and photo-taking activities as Tsai did before. The two later set out with different groups in the parade, and Tsai left at around 3 p.m. to attend another event in Taoyuan City.

Despite being her former premier, Lai entered the presidential race in March and thus became the main challenger for Tsai, who is seeking re-election in 2020, in the DPP primary.

While speaking with reporters, Tsai said her attendance at the parade showed her determination to continue putting the development of green energy at the core of her administration’s policy.

Tsai pledged that as long as she remains the president, her administration will continue working on the reduction of the country’s reliance on nuclear and fossil-fuel power. She will also make sure that electricity production stays efficient.

The Nuclear-free Homeland policy has always been the policy of the Tsai administration. Even though a pro-nuclear referendum received a majority last November, Tsai maintains her position to abolish the use of nuclear power in Taiwan by 2025.

The coalition responsible for Saturday’s parades, one in Taipei and the other in Kaohsiung, is the National Nuclear Abolition Action Platform (NNAAP). Ten minutes passed 2 p.m., the host of the rally announced on the stage set up on Ketagalan Boulevard that the number of participants had surpassed 5,000.

The coalition also called on the government to put the focus of its energy policy on green energy.

NNAAP said the purpose of the parade is to raise public awareness of the issue as it worries that the pro-nuclear power group intends to manipulate the referendum again with a new proposal that could likely be put to a vote next year.

Whether or not the country should use nuclear energy for its power supply has been a contested question. After the tsunami that triggered a nuclear disaster at Japan’s Fukushima power plant on 11 March, 2011, public opinion in Taiwan rallied around opposition to nuclear power and calls for alternative energy.

Controversies surrounding the Lungmen Nuclear Power Plant in northeastern Taiwan were also an important consideration for the public.

However, a major power failure in August 2017, which was caused by human error and affected more than 600 million households, spurred concern over power shortages in Taiwan and the government’s energy policy.

In addition, problems of air pollution, some of which are attributed to the emissions of fossil-fuel power plants in the country, have also played an important role in impacting the public’s opinion in last year’s pro-nuclear referendum.