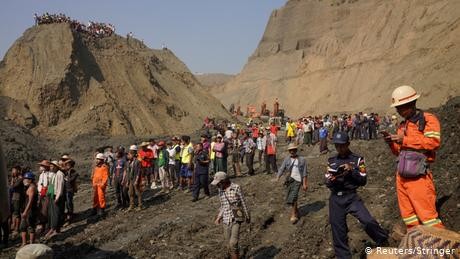 More than 50 people are feared dead in a landslide at a jade mining site in northern Myanmar, the latest disaster in a poorly regulated industry.

Three bodies have been recovered and 54 jade miners remain missing after a wall of debris came sliding down from a collapsed reservoir used to hold discarded mining waste late Monday night, a lawmaker from the Hpakant area of Kachin state said.

"They won't survive. It is not possible because they are buried under mud," said Tin Soe. "It is very difficult to retrieve the bodies."

The Ministry of Information confirmed the accident and said rescue operations had been underway since Tuesday morning.

A dangerous and sketchy trade

Hpakant, sandwiched between the Indian and Chinese borders, is a vast wasteland at the center of the world's biggest jade mining industry.

Dubbed the "wild wild east" for the prevalence of lawlessness, smuggling, alcohol, prostitution and drugs, the area attracts tens of thousands of migrant laborers hoping to scavenge scraps of jade left behind by big mining firms.

Watchdog Global Witness estimates the green gemstones bring in $31 billion (€27.5 billion) annually, with most of the money going to individuals and companies tied to the military. Much of the jade is smuggled to markets in China.

Activists say the jade mining industry is loosely regulated, which contributes to environmental destruction and poor safety standards. Dozens of miners die each year in landslides.

Northern Myanmar is also embroiled in a decades-long armed conflict between the military and ethnic rebels from the Kachin Independence Army. Natural resources have helped finance and fuel the conflict.