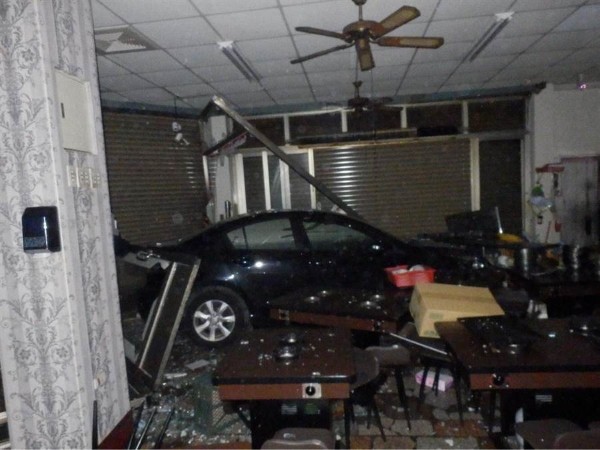 TAIPEI (Taiwan News) -- In what appears to be a crazy day for car wrecks in Taichung, a man lost control of his vehicle while turning left and sailed into a hotpot restaurant.

Early this morning, while making a hard left turn, a 27-year-old man surnamed Chiang (江) lost control of his black sedan and plowed into a hotpot eatery in Taichung, reported China Times. Fortunately, the shop had already closed and no injuries were reported.

Residents in Taichung's Tanzi District heard a loud crashing sound on Zhongshan Road. When they ventured out to check on the source of the sound, they found a hotpot shop at a corner of the street with a huge hole punched through its corner window by a black sedan.

The car had plunged deep inside the restaurant, shattering windows, smashing tables chairs, and obliterating a metal door. In the process, the right side of the sedan had sustained serious damage.

According to an initial police investigation, Chiang had been roaring down the road in his black sedan before trying to make a left turn. However, it appears he was unable to apply his brakes, and the car went careening into the corner window of the shop.

Fortunately, the restaurant had already closed, and no one was injured. Nevertheless, the shop sustained extensive damage.

After having Chiang submit to a breathalyzer test, police did not detect excessive alcohol in his bloodstream. Chiang told police that he was driving at about 50 kilometers per hour when he began to turn left and tried to apply the brakes, but they were unresponsive, and he lost control of the car, according to the report.

The owner of the hotpot shop was shocked by the scene and asked, "How on earth did it crash?" Police are still investigating the exact cause of the accident.

Meanwhile, at 9:28 a.m. this morning in Taichung's Shalu District, a bus driver narrowly escaped death after a trailer flew through his windshield during a three-vehicle pileup.