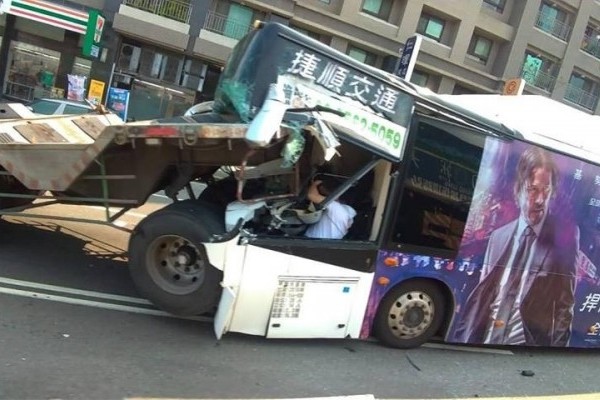 TAIPEI (Taiwan News) -- A bus driver appears to have narrowly escaped death after a trailer flew through his windshield during a three-vehicle pileup in Western Taiwan this morning.

At 9:28 a.m. this morning, police received a report of a multi-vehicle collision at the corner of Xiangshang Road, Section 7 and Baoning Road in Taichung's Shalu District, reported Liberty Times. According to an initial police investigation, the accident occurred after the driver of a large truck hit the breaks too late when the bus in front of it suddenly decelerated.

The truck smashed into the Taichung City electric bus, which in turn rammed into a tractor-trailer in front of it. The trailer then hopped up and flew through the windshield of the bus, missing the driver's head by inches.

The 50-year-old driver of the bus, surnamed Lin (林), became pinned in between the twisted ruins of the trailer and bus. A photo taken on the scene shows how frighteningly close the massive trailer came to crushing Lin's head.

The trailer protruded so far inside the bus that Lin's arms can be seen wedged against the trailer and the steel frame of the bus' windshield as he raised them to shield his face. At 9:44 a.m., rescuers arrived on the scene and were able to extract Lin from the crumpled bus and rush him to Kuang Tien General Hospital for treatment, reported CNA.

Lin suffered a laceration to the back of his head and contusions on all of his limbs. Lin is currently undergoing further examinations and treatment.

The 45-year-old driver who was believed to be at fault surnamed Huang (黃) and his 43-year-old wife/co-driver surnamed Chu (朱) also sustained injuries, according to the report. Huang suffered a contusion to his right leg and lacerations to his face and limbs.

Chu suffered a broken nose and lacerations to her nose, as well as abrasions and contusions on her limbs.

The detailed cause of the accident is still under investigation by police.