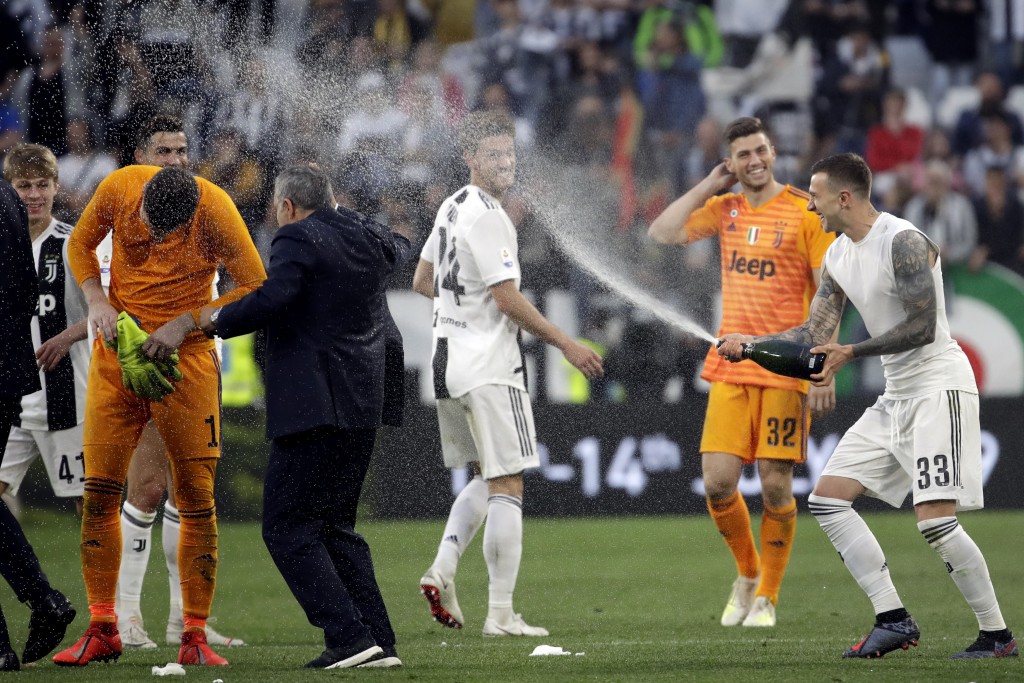 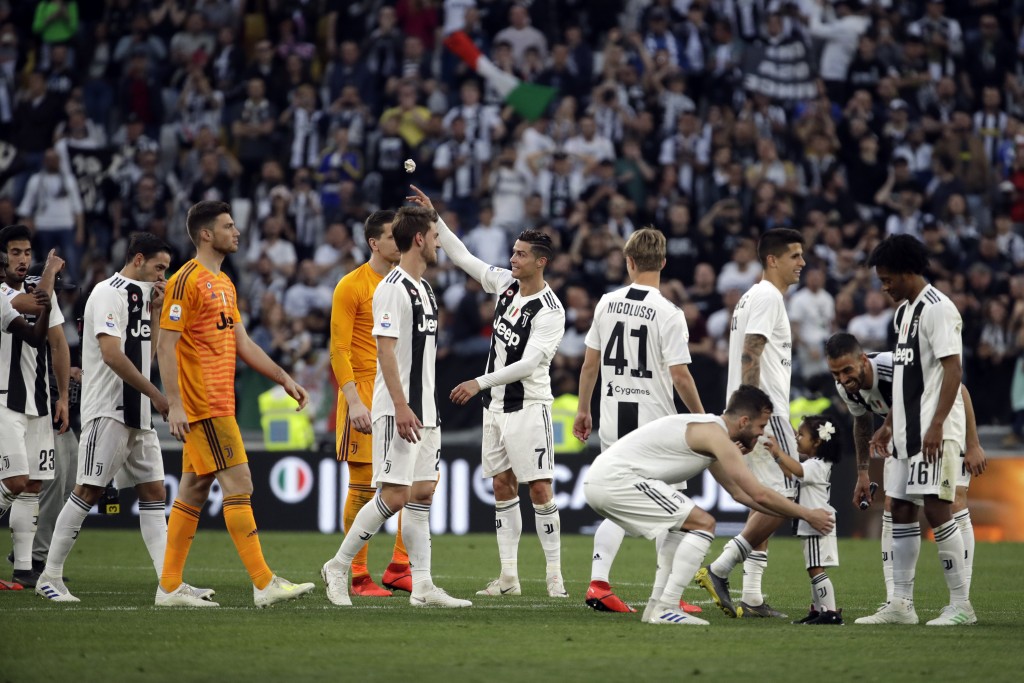 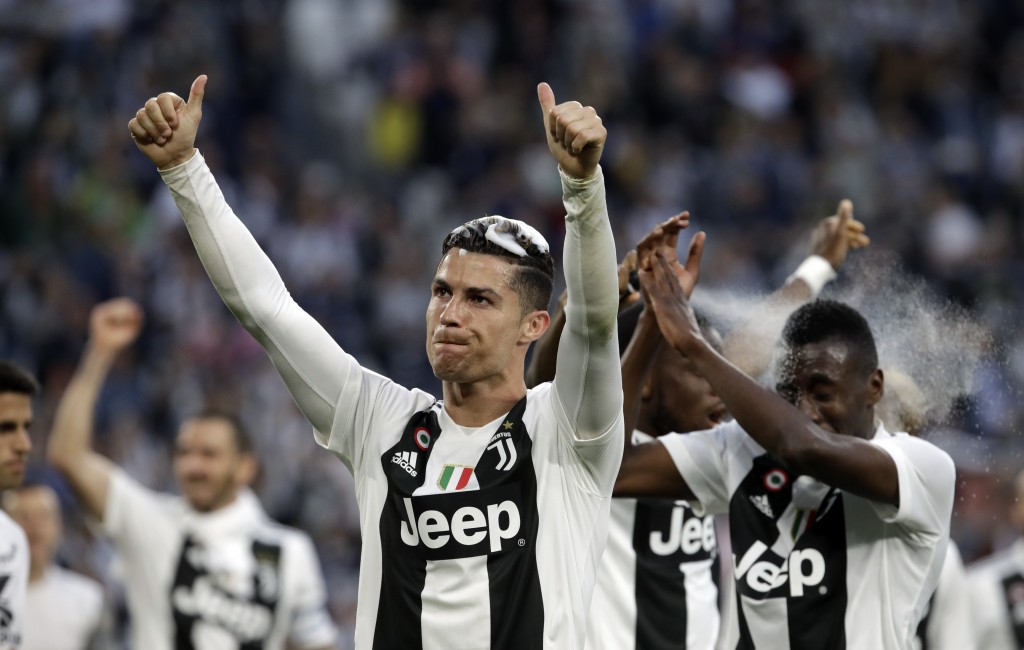 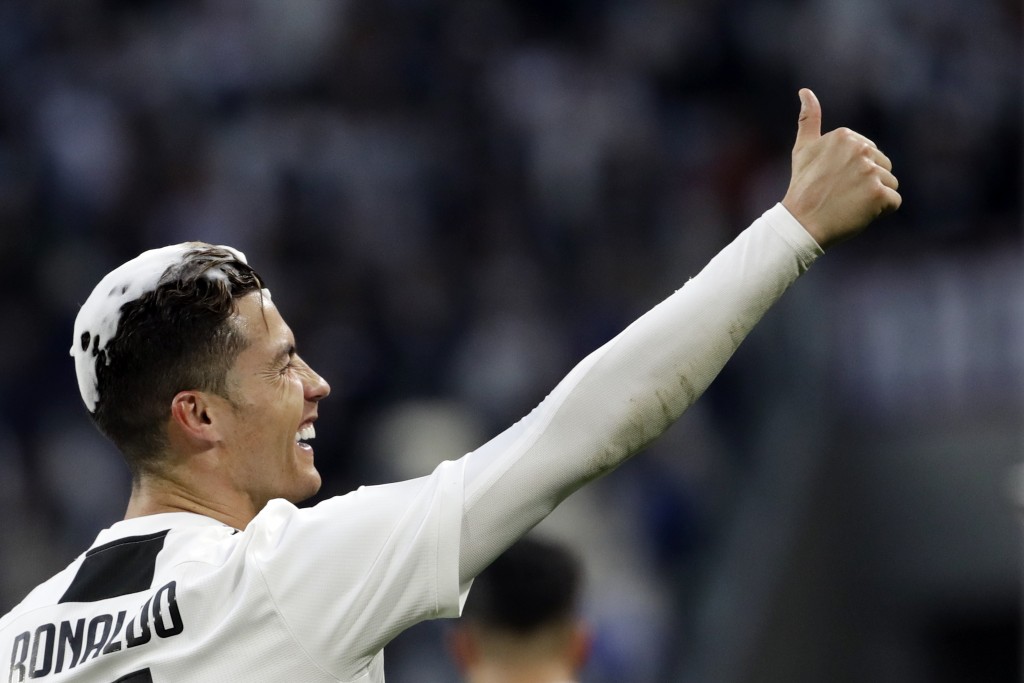 MILAN (AP) — When the best team in Italy signed possibly the best player in the world, preventing it from winning yet another Serie A title was always going to be difficult.

And so it proved as Juventus and Cristiano Ronaldo continued breaking records.

On Saturday, Juventus clinched a record-extending eighth successive Serie A title, with five matches to spare, after it beat Fiorentina 2-1.

No club in Europe's top five leagues has won as many consecutive titles. Lyon managed seven successive Ligue 1 titles in France. No club also has as many as Juve's overall total of 35.

It was coach Massimiliano Allegri's fifth league title in as many years in charge of Juventus as he continued the streak started under his predecessor Antonio Conte.

How did Juventus do it and what makes the club so dominant in Italy?

Here are a few reasons:

Ronaldo may have been signed mainly to help Juventus finally win the Champions League but his goals and assists have also proved crucial on the domestic front.

Ronaldo, who is chasing the top goalscorer title, has weighed in with 19 goals. That puts the 33-year-old three behind Sampdoria's Fabio Quagliarella.

He could become the first player to win the top goalscorer award in three of Europe's top five leagues, having done the same in Spain (three times) and England.

Ronaldo would also become the first player to win the top goalscorer award and the Serie A title in his first season in Italy.

It hasn't all been plain sailing for the Portugal star, however.

Ronaldo took a while to settle in Italy and didn't score his first goal in Serie A until his fourth match for his new club. He was then sent off in the very next game, at Valencia, on his Champions League debut for Juventus.

Things began to click into place on the field, but off it he is facing a rape allegation in the United States.

Kathryn Mayorga, an American woman, filed a civil lawsuit in Nevada in September claiming Ronaldo raped her in his Las Vegas hotel room in 2009. Police reopened an investigation into the allegation at her request. Ronaldo has denied any wrongdoing.

When Napoli pushed Juventus all the way last season in one of the tightest title races, it gave everyone hope that this year would finally see the Serie A crown torn from its grip. But then the Bianconeri signed Ronaldo.

Napoli, with new coach Carlo Ancelotti, was confident it could still challenge.

When introduced in July, Ancelotti said he hoped 2018 would be remembered as the year both Ronaldo and he went to Serie A. But the gap has only grown.

Under Maurizio Sarri, Napoli finished four points behind Juventus. This year the gap is set to be double figures.

Napoli's struggles this season were summed up by two recent league matches: it should have got six points from the games against lowly Empoli and Genoa, it got one.

Other teams have fared worse, with Inter Milan having its now-traditional midseason slump in January and then facing further problems with star forward Mauro Icardi and stripping the Argentine of the captaincy.

Below the top two, the competition has been fierce for the Champions League places, with several teams still in the running for a top-four finish but the difference in class between them and Juventus has continued to widen.

Juventus already had the best squad in Serie A and Ronaldo was not the only signing it made during the offseason.

The Portugal international's arrival might have overshadowed shrewd deals for the likes of Emre Can and Joao Cancelo but they also contributed significantly to Juve's title charge.

The Bianconeri have strong cover for every position, and that allowed the team to cope well even when it was without key players through injury such as Mario Mandzukic, Sami Khedira and captain Giorgio Chiellini.

It also allowed Allegri the luxury of resting players at various points of the season. Juventus had seen 32 different starting lineups in as many Serie A rounds.

And it saw the emergence of teenager forward Moise Kean.

The 19-year-old Kean scored twice on his first league start for Juventus in March and the Italy forward has weighed in with another six goals for club and country.

Most teams would struggle following the loss of a leader such as Gianluigi Buffon.

Buffon, widely regarded as one of the best goalkeepers in the world, left Juventus for Paris Saint-Germain in the offseason after 17 years at the Italian club — six as captain.

Wojciech Szczesny, who had been signed the previous year, easily slotted in between the posts while longserving veteran Chiellini — who has been at the club since 2005 — took over the captaincy.

With the return of Leonardo Bonucci, after a season at AC Milan, Juventus was as solid as ever at the back.

It conceded only 23 goals in the 33 matches it took to secure the title, comfortably the fewest in the league. The 67 goals it scored was also the best in Serie A.