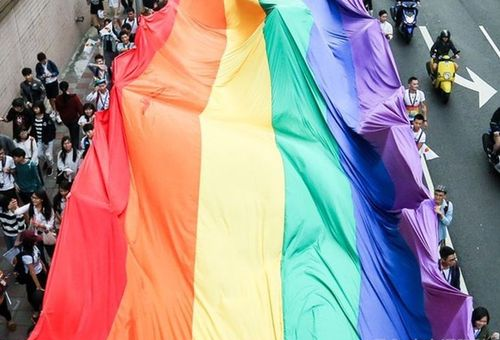 TAIPEI (CNA) -- A total of 157 same-sex couples in Taiwan plan to register to get married at household registration offices on May 24, the day that the Constitutional Court set for same-sex marriages to be legalized, the Taiwan Alliance to Promote Civil Partnership Rights (TAPCPR) said in a recent Facebook post.

To mark the historic day, TAPCPR, a local LGBTI rights organization, is also organizing a traditional wedding banquet outside the Presidential Office in Taipei on May 25.

Writer Chen Hsueh's (陳雪) and her partner will be among the couples to register to get married that day.

The marriage registration and wedding plans are being organized despite ongoing uncertainty over how Taiwan's legislature will handle competing demands from groups in favor of legalizing same-sex marriage and those opposed to categorizing same-sex unions as marriages.

On May 24, 2017, Taiwan's Constitutional Court ruled that the prohibition of same-sex marriage in the Civil Code was unconstitutional and that the relevant authorities must amend or enact laws in accordance with the court's interpretation No. 748 within two years.

The deadline for doing so is May 24 this year.

However, a referendum last November on whether to support same-sex marriage legalization through amendments to the Civil Code was defeated.

When asked: "Do you agree that the Civil Code marriage regulations should be used to guarantee the rights of same-sex couples to get married?" 6,949,697 Taiwanese voters voted against the initiative, while 3,382,286 voted in favor.

Nonetheless, the legislature on March 5 this year voted to send "The Enforcement Act of Judicial Yuan Interpretation No. 748" to a second reading. It's the first bill created in the name of the constitutional interpretation, which would allow gay couples to register their marriage or divorce at any household registration office.

To appease those who oppose treating same-sex unions as marriages, the legislature on March 15 also voted to send another draft bill, which would limit the use of the words "marriage" and "spouse" to heterosexual couples, to a second reading.

It was drafted in response to the passing of referendum No. 12, which asked, "Do you agree to types of unions, other than those stated in the marriage regulations in the Civil Code, to protect the rights of same-sex couples who live together permanently?"

As it is less than one month before May 24, the deadline the Constitutional Court had set for legalizing same-sex marriages, the TAPCPR stepped up its campaign by issuing a statement on Thursday contending that "The Enforcement Act of Referendum No. 12" diverges from the court's ruling in 2017.

At the same time, Marriage Equality Coalition Taiwan, another pro-marriage equality group, urged lawmakers to pass "The Enforcement Act of Judicial Yuan Interpretation No. 748" before May 24 in a press release Friday, so that same-sex couples can wed in accordance with the law.

Meanwhile, a conservative group, The Coalition for the Happiness of Our Next Generation, held a press conference on Friday, calling legislators to stick to the results of the 2018 referendum and support "The Enforcement Act of Referendum No. 12."

Bills in Taiwan have to pass second and third readings by the full legislature before becoming laws.

It was unclear what would happen if the legislature passes both the bill to allow same-sex couples to register their unions as marriages and the bill that preserves use of the words "marriage" and "spouse" for heterosexual couples. 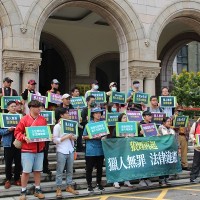