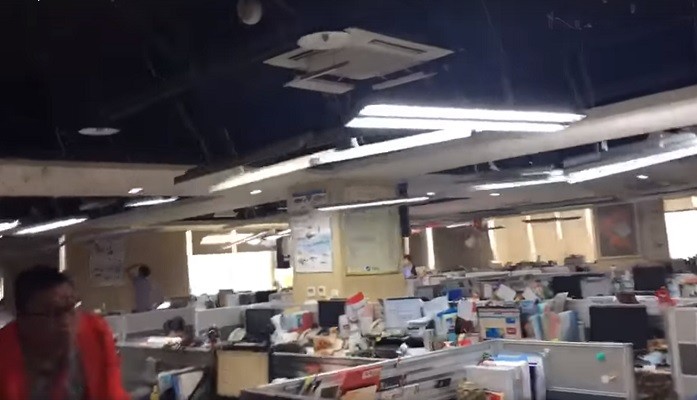 TAIPEI (Taiwan News) -- As footage has started to surface from Thursday's powerful magnitude 6.1 earthquake, video of office lights in New Taipei City swinging out of control has captured the attention of a quarter million netizens.

A magnitude 6.1 earthquake struck at 1:01 p.m. in eastern Taiwan's Hualien County, where an intensity level of 7 was felt, while an intensity level of 4 was felt in greater Taipei, according to the Central Weather Bureau (CWB). Seventeen people have reportedly required hospital treatment due to the quake, two buildings in Taipei have tilted to one side, and there have been numerous reports of power outages, water stoppages, and gas leaks.

Many videos have begun to surface demonstrating the power of the temblor, including footage of a boulder almost crushing a car, the Taipei 101 damper swaying, and many videos of people in homes, offices, and schools feeling the wrath of the quake.

At 3:27 p.m., barely two after the earthquake struck on Thursday, a member of the popular Taiwanese Facebook group Breaking News Commune (爆料公社) posted a video of ceiling office lights swaying wildly on the 14th floor of a building in New Taipei City's Xinzhuang District. In the video, the lights, which appear to be dangling from the ceiling from thin strings, begin to swing dramatically in unison from side to side.

Employees start to scream, some try to run, others stand and brace themselves, and others hunker down at the desks. One employee can be heard screaming "Why haven't you run yet? Hurry up and run!"

"Sitting under lights hoping for an injury on the job?"

"People who haven't been through the 1999 Jiji earthquake don't know what a big earthquake feels like."

"Two of them are too calm. Aren't they afraid of being crushed?"

"In the past I already thought that hanging office lights in this way was was a big BUG."