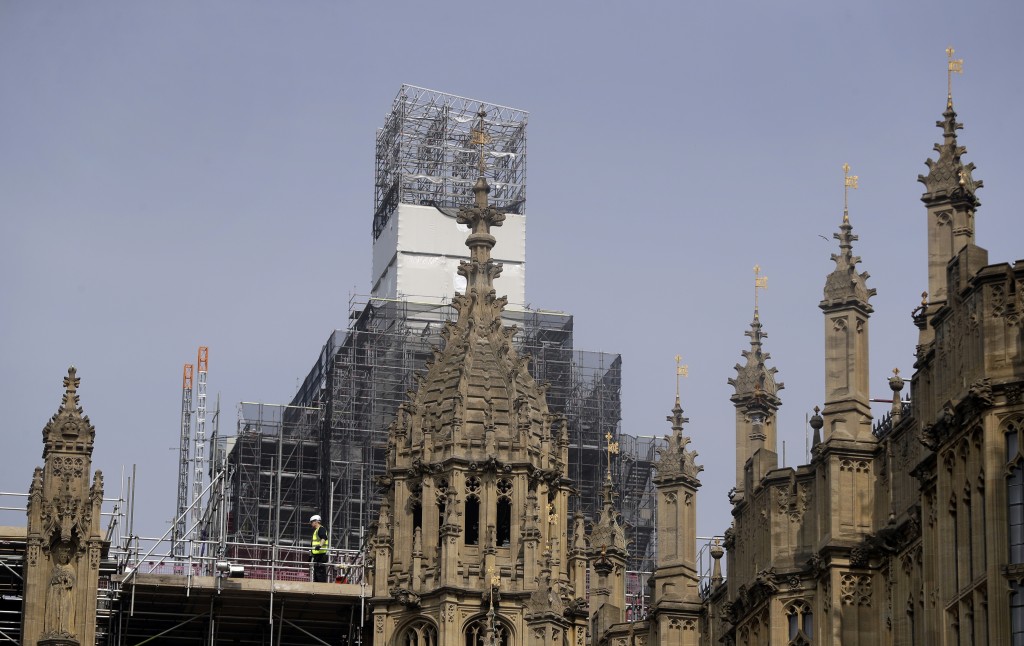 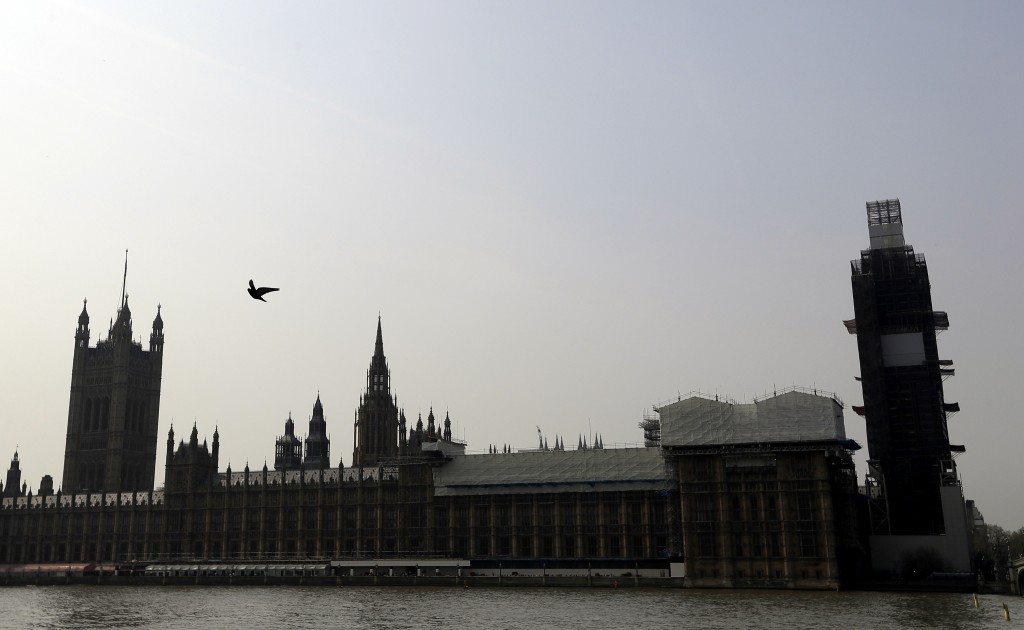 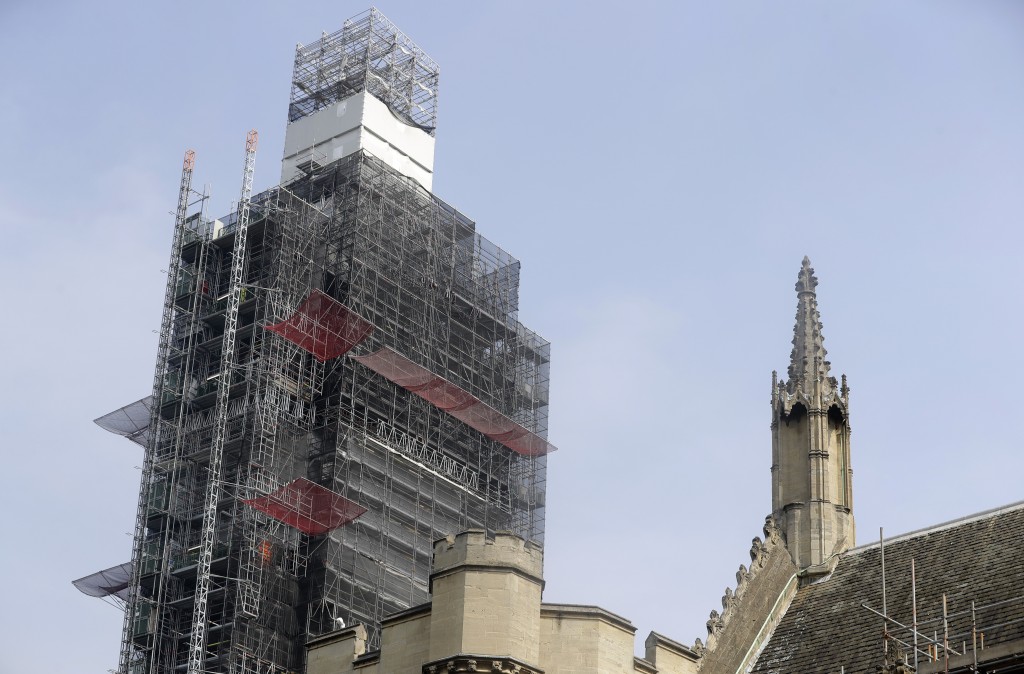 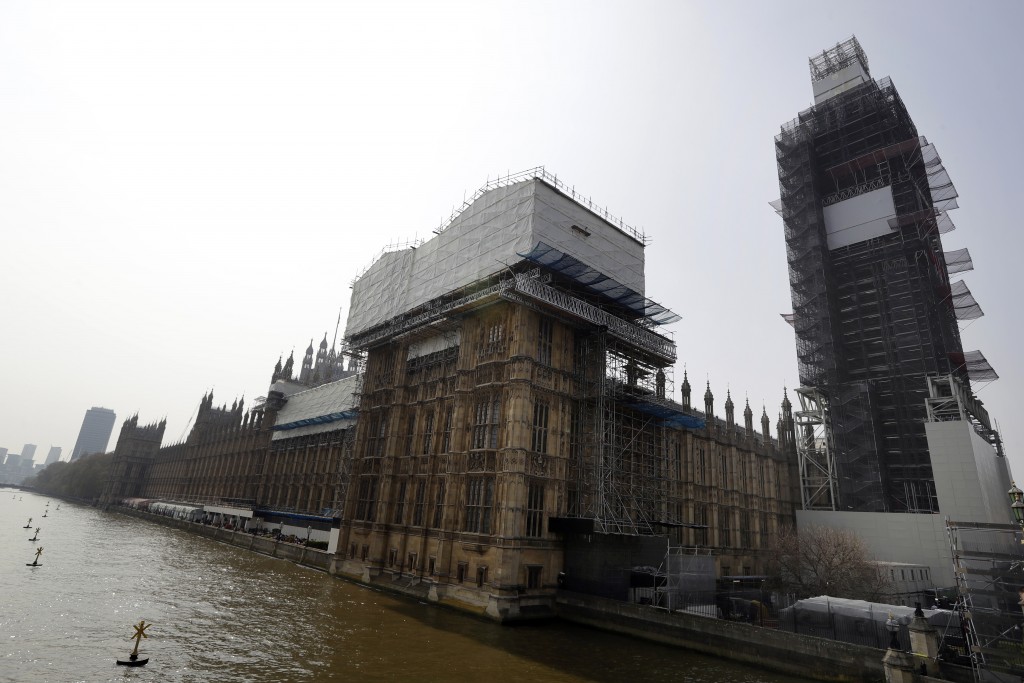 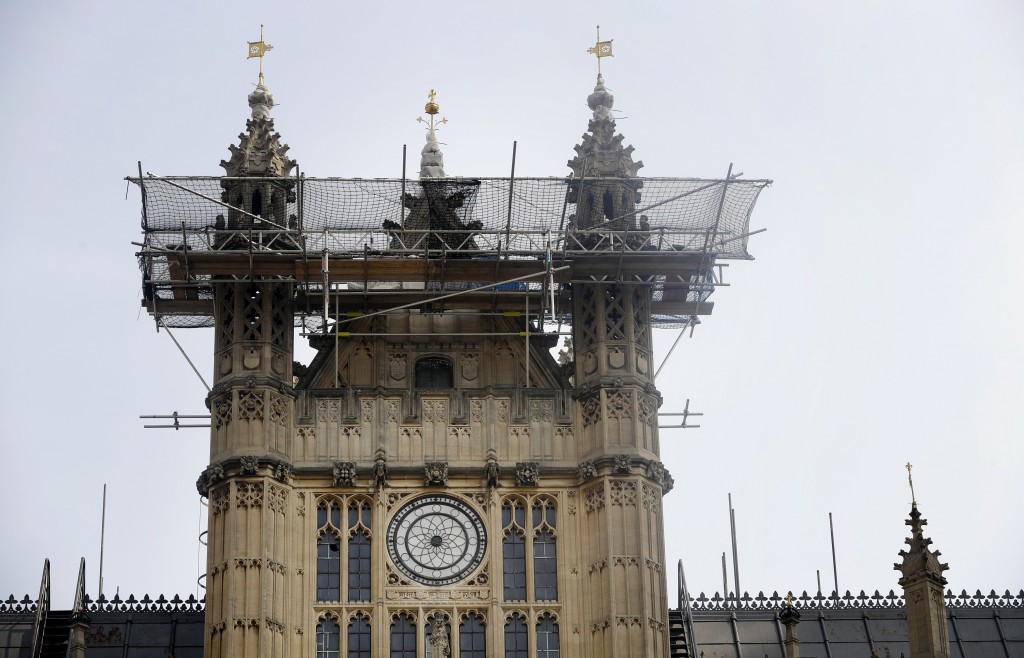 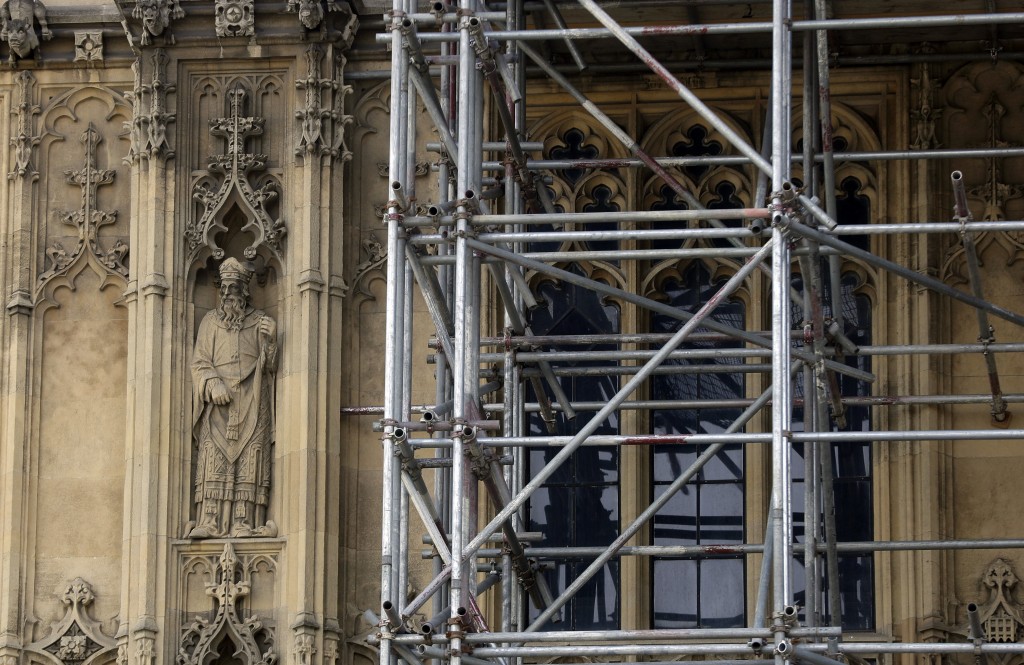 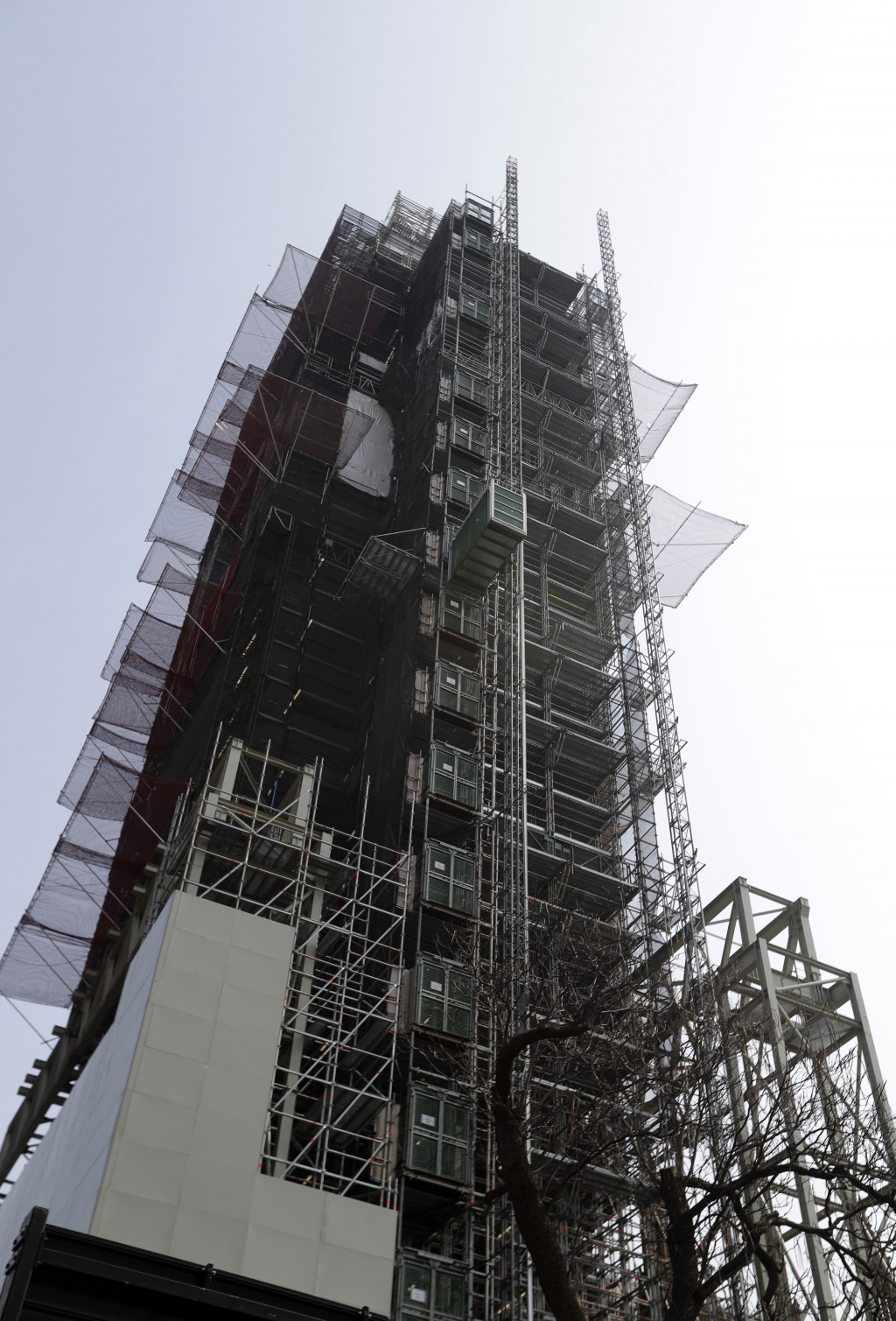 LONDON (AP) — For some Britons who watched Notre Dame burn so fiercely in Paris, the horror was mixed with apprehension. What happened to the French landmark this week could easily befall the Houses of Parliament in London.

The seat of Britain's government is a crumbling, leaky, rodent-infested fire trap that fire wardens must patrol around the clock to avoid an inferno.

Warnings about Parliament's dilapidated state have been growing louder, and experts say they can no longer be ignored. Chunks of masonry have repeatedly come crashing down from the outside of the building. Earlier this month lawmakers were sent home after water from a burst pipe began gushing into the House of Commons chamber itself.

"This is a building that is trying to say something," said Caroline Shenton, author of two books on the history of Parliament.

For Shenton, the scenes from Paris brought a sad sense of deja vu. Her book "The Day Parliament Burned Down" recounts the destruction in 1834 of the current legislative building's predecessor in one of the biggest blazes London has ever seen.

"I watched the fire spread across the roof of Notre Dame and the scenes I described in 'The Day Parliament Burned Down' came back to me," Shenton said. "The rapid spread. The complete lack of fire protection. The huge crowds gathering — silent, shocked."

Out of the 1834 fire rose the current Parliament building, a neo-Gothic marvel by architect Charles Barry that took 30 years to complete. A UNESCO World Heritage Site, the limestone-clad building has 1,100 rooms and almost 3 miles (4.8 kilometers) of corridors.

And it is being eaten by decay. The roof leaks and most of its 4,000 windows don't close properly. Mechanical and electrical systems have not been updated since the 1940s. Basements are clogged with century-old steam pipes, bundles of wires and asbestos.

A report commissioned by Parliamentary authorities warned in 2016 that the building was at risk of a "catastrophic event" such as a flood or fire that would leave it uninhabitable.

Labour Party lawmaker Chris Bryant, part of a committee looking into the restoration of Parliament, warned this week that a fire could cause "a major loss of life" because of the challenges of evacuating the labyrinthine structure which houses thousands of employees and is visited by 1 million people a year.

Officials in charge of Parliament's Restoration and Renewal Program said in a statement that they "stand ready to learn any lessons that emerge from the fire at Notre Dame to ensure we do everything possible to protect our people and buildings."

The Parliament building faces some of the same risks as Notre Dame. Although built in the 19th century, Parliament incorporates parts of more ancient structures. The oldest section, Westminster Hall, is 900 years old and has a magnificent wood-beamed roof — like Notre Dame.

Hours after the cathedral's roof was consumed by flames, French President Emmanuel Macron declared that it was France's destiny to rebuild it.

Yet, with Brexit consuming all the political oxygen in Britain, there's no similar sense of national purpose to preserving the Houses of Parliament. Unlike Notre Dame, a place of spiritual succor, Parliament is full of politicians, a largely unpopular group.

Matthew Flinders, a professor of politics at the University of Sheffield, said Britons "have a great affection for the building" — but less regard for its occupants.

Meanwhile, the politicians who must make big decisions about the building "are very scared to be seen to be spending large amounts of public money" on themselves.

"In many ways, the worst people to take decisions about the future of the Palace of Westminster are the (lawmakers) who are in it today," Flinders said.

In 2018, after years of wrangling and delays, lawmakers voted to move out for several years so the building can be repaired, but that will not happen until the mid-2020s. It's estimated the repairs will take six years and cost about 3.5 billion pounds ($4.6 billion), although that figure is likely to rise.

For now, fire wardens patrol the Parliament complex 24 hours a day, alert for small blazes that could spread. Urgently needed repairs are being carried out on parts of the complex, including its Big Ben tower, whose famous clock is shrouded in scaffolding.

Repairing and updating such structures brings its own dangers. Old buildings are often at their most vulnerable during construction work. Notre Dame's roof was being restored when the fire broke out on Monday.

David Leakey, who retired as Parliament's head of security last year, told BBC radio that previous wake-up calls had been met by "prevarication and delay."

"The question is this: How often are the politicians going to hit the snooze button?" he asked.