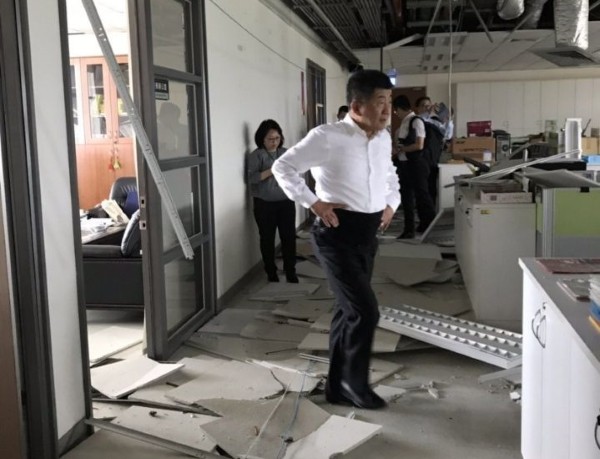 TAIPEI (Taiwan News) -- After a magnitude 6.1 earthquake struck eastern Taiwan's Hualien County at 1:01 p.m. today, Taiwan's Health Minister Chen Shih-chung (陳時中) suffered a minor injury when damaged was inflicted on the Ministry of Health and Welfare (MOHW) offices by the quake, while one other person in the ministry also suffered a mild injury.

The MOHW today announced that the temblor caused ceiling tiles, air vents, and chunks of steel framing to fall on a few of the floors of the ministry's headquarters in Taipei's Nangang District. As the quake delivered intensity level 4 shock waves to Taipei, Chen braced a steel doorway, and his hand was "pinched" when the steel frame of a doorway came loose.

However, the injury was reportedly minor, according to Up Media. Another employee suffered a minor injury as well, reported ETtoday.

After the quake ended, Chen then quickly rushed to the 8th floor, where much of the ceiling tiles and steel framing had collapsed from the ceiling. Public Relations Director (王哲超) Wang Che-chao told Up Media that the most extensive damage occurred on the 12th floor, the building's top floor.

Wang said the departments which suffered the most damage were the Social and Family Affairs Administration and the Department of Long-Term Care. Fallen ceiling tiles were seen scattered about on 9th, 10th, and 11th floors.

Fortunately, power is running normally, and no structural damage was sustained to the building, which has been in operation for less than five years. Once the cleanup has been completed, work is expected to resume to normal, said Wang.

Wang said that the ministry is contacting the builder about repairing the ceilings.

Wang said that after the incident, Chen immediately inspected the worst-damaged sections of the building. He then ordered hospitals responsible for first aid and a large number of emergency medical and rescue organizations to conduct a comprehensive inventory.

Hospitals affiliated with the ministry, local health center, homes for the elderly, and clinics have been ordered to promptly provide a damage report. If any damage or injuries have been found, they will be announced to the public.