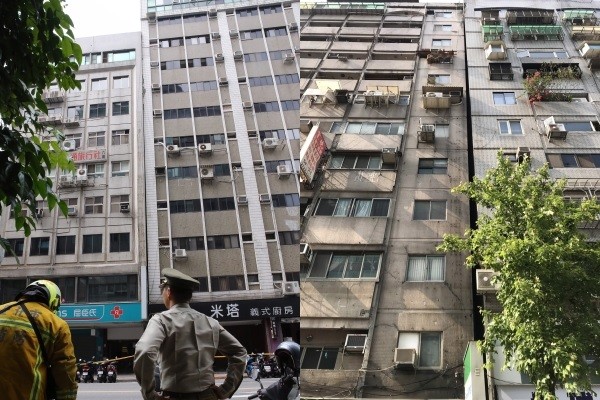 There is now a second building which has also been seen to be leaning sideways. The second building found to be tilting sideways after the quake is located at 405 Xinyi Road, Section 4. Police have already cordoned off the area and have evacuated 32 people from the structure. After an initial inspection, officials from the Taipei City Construction Management Office say that the building is not in immediate danger of collapsing, reported CNA.

Building found to be tilted on Xinyi Road after quake. ​(CNA photo)

TAIPEI (Taiwan News) -- After a magnitude 6.1 earthquake struck eastern Taiwan's Hualien County, shock waves were felt across the island and a building in Taipei City was found to be leaning to one side shortly afterward.

At 1:01 p.m. today A magnitude 6.1 earthquake struck eastern Taiwan's Hualien County, where an intensity level of 7 was felt, according to the Central Weather Bureau (CWB). An intensity level of 4 was recorded in Taipei City, and after the quake, a building at Chang'an East Road, Section 2 was found to be leaning to one side and pushing into a neighboring structure, reported CNA.

More than 100 people have been evacuated from the building and were moved to nearby Yitong Park. The Taipei City Government said that the Building Administration Office is liaising with professional associations and will survey the site shortly.

Closeup of area where one building is pressing into neighboring building. (CNA photo)