TAIPEI (Taiwan News) -- A magnitude 6.1 earthquake struck at 1:01 p.m. in eastern Taiwan's Hualien County, where an intensity level of 7 was felt, according to the Central Weather Bureau (CWB).

The epicenter of the temblor was 10.6 kilometers northwest of Hualien County Hall at a shallow depth of 18.8 kilometers.

The earthquake’s intensity, which gauges the actual effect of a temblor, measured a 7 on Taiwan’s 7-tier intensity scale in Hualien County and a 5 Nantou County, Yilan County, Taichung City, and New Taipei City. An intensity level of 4 was recorded in Taoyuan City, Hsingchu County, Miaoli County, Changhua County, and Taipei City, while an intensity level of 3 was registered in Chiayi County, Hsinchu City, Yunlin County, Taitung County, Keelung City, and Chiayi City.

CWB map showing intensity of the quake felt in different parts of Taiwan.

All MRT trains in Taipei have temporarily come to a halt as a safety precaution.

A magnitude 4.1 aftershock struck Hualien at 1:17 p.m., according to the CWB. The epicenter of the quake was 13.7 kilometers northwest of Hualien County Hall at a depth of 20.3 kilometers.

The second temblor generated an intensity level of 5 in Hualien County, a 3 in Nantou County, and a 2 in Taichung City and Yilan County. 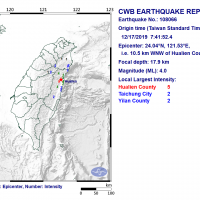