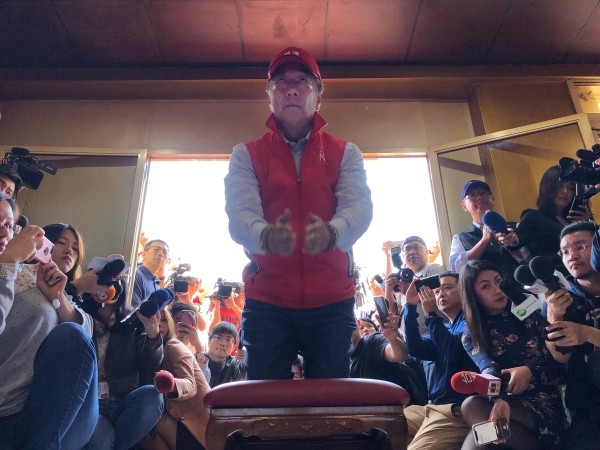 TAIPEI (Taiwan News) -- Foxconn founder and chairman Terry Gou (郭台銘) said today that he will definitely follow the instructions given to him in a dream by the sea goddess Matsu (媽祖) to come out and do good for the suffering of the people, and bring peace and prosperity to Taiwan, indicating his possible decision to run for the Taiwan presidency.

At 11 a.m. today, Gou appeared before a sea of worshippers, reporters, and onlookers at the Ci-Hui Temple. The scene was chaotic and Gou could barely squeeze his way through the crowd.

After praying and placing incense, Gou explained the origins of the temple in less than fluent Taiwanese Dialect to outside visitors. Gou said that he grew up in Banqiao and graduated from Banqiao Elementary School.

Gou claimed that "Matsu watched him grow up" in the neighborhood. Therefore, he said that when Matsu asked him to go back to the goddesses ancestral temple in Putian, Fujian Province, and he felt honored to do so, despite the two-hour walk to it.

The tycoon then expressed his gratitude to Matsu for protecting him at all times, regardless of where he was in the world. Gou said that the 2020 election is very important, and that Matsu "asked me in a dream to come out a few days ago," according to the report.

The Foxconn founder said that his heart is on the same wavelength as Matsu and he should accept Matsu's spirit of doing good for people who are suffering, give young people hope, establish peace across the Taiwan Strait, and bring peace and prosperity to Taiwan. He said that after peace and prosperity is established, the economy will naturally improve.

Gou said that Matsu wanted him to come out and do something, not just for the sake of money or pleasure. He described himself as being "like the righteous son of Matsu," and that the goddess has asked him to do more for the people of Taiwan.

He then cryptically said that "I will certainly obey Matsu's instructions to proceed," reported CNA.

Because Gou did not explicitly announce his candidacy on the spot, throngs of reporters then asked him if he would make a presidential bid. In response, Guo only responded by saying that he must go and pray to Guan Gong next, and then wove his way through the hordes of reporters and onlookers.