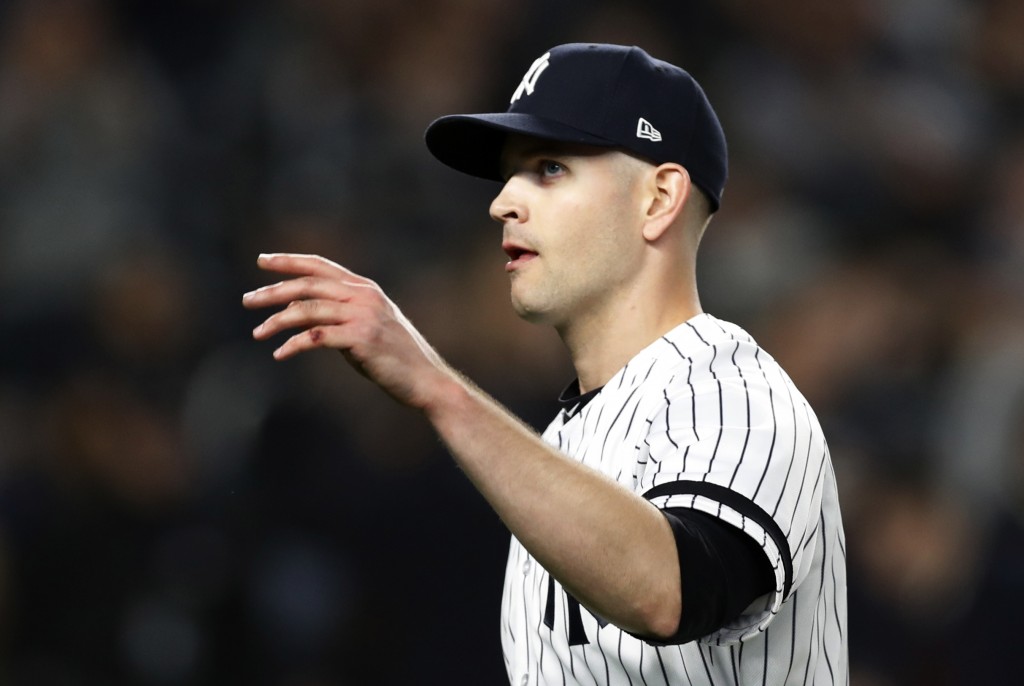 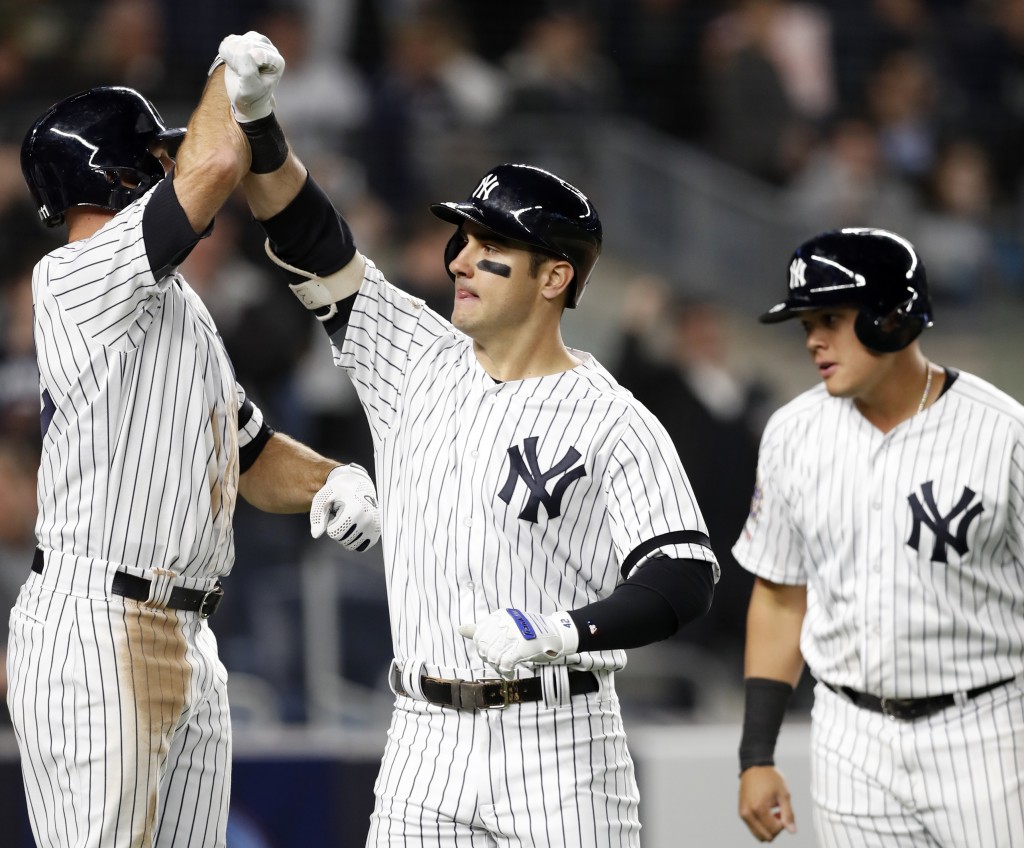 NEW YORK (AP) — James Paxton struck out 12 in his first stab at baseball's biggest rivalry, Red Sox ace Chris Sale found his fastball but not better results, and the New York Yankees three-hit Boston 8-0 on Tuesday night in the first game this season between the struggling AL East foes.

Paxton (2-2) pitched two-hit ball for eight innings, walking one and going to just two three-ball counts in a game that took only 2 hours, 23 minutes.

Mike Tauchman hit his first major league homer and drove in four runs, and Clint Frazier and Gleyber Torres also went deep for the Yankees. New York had dropped five of six and is 7-9 a year after winning 100 games.

Sale (0-4) reached 97.5 mph — a positive sign for Boston after his velocity sagged this spring — but still got hit around, allowing four runs and seven hits over five innings. He struck out six and walked one while the World Series champions dropped to 6-12.

Kingery and Maikel Franco hit three-run homers and Realmuto had a pair of two-run doubles in a 10-run first inning. Realmuto also went deep for the Phillies in the fourth.

Mets starter Steven Matz (1-1) allowed eight runs — six earned — without retiring a batter. He had allowed only three earned runs total in his first three starts. The lefty's ERA rose from 1.65 to 4.96.

Wilson Ramos and Michael Conforto each hit a solo homer for New York.

Jung Ho Kang also went deep for Pittsburgh, which blew a 3-0 lead but recovered to win when Marte hit a two-out drive off Shane Greene (0-1). Detroit's closer hadn't allowed a run all season.

Keone Kela (1-0) gave up a tying single by Jeimer Candelario in the ninth, but Nick Kingham was able to close out the Tigers in the 10th for his first career save.

Pittsburgh starter Joe Musgrove permitted his first two earned runs of the season. He yielded six hits and a walk while striking out six in seven innings.

Tigers starter Matthew Boyd struck out the side in the first but eventually allowed three runs in seven innings.

Glasnow (4-0) allowed hits to six of the first 13 batters, but allowed one hit over his final 4 2/3 innings and ended the outing by retiring 10 in a row.

Garcia hit a two-run homer during a three-run fourth, and added an RBI single in the eighth. Jose Alvarado and Diego Castillo, who earned his second save, each went a perfect inning.

The Orioles got an RBI from both Rio Ruiz and Renato Nunez, and Dylan Bundy (0-2) gave up three runs and three hits over five innings.

Quintana (2-1) struck out seven and extended his scoreless innings streak to 14. He didn't allow a runner to reach second until Austin Dean's two-out double in the seventh.

Javier Baez went 3 for 4 and hit his fifth homer, a solo shot to the opposite field off Adam Conley in the eighth. Baez has three hits in each of his last three games. Ben Zobrist hit a sacrifice fly in the ninth for Chicago's fourth run.

Brandon Kintzler relieved Quintana and surrendered a two-out single to Brian Anderson and walked Starlin Castro. Pedro Strop pitched a scoreless ninth for the Cubs, who have won five of six.

The Giants entered the game with 10 homers through their first 17 games. They won for the fourth time in five games.

Strasburg (1-1) allowed four runs in six innings. Still learning to pitch with a fastball that sits in the low-to-mid-90s, instead of the high-90s heat he possessed before Tommy John surgery and other ailments, he's served up five homers over his past two outings.

ATLANTA (AP) — Christian Walker homered leading off the ninth inning and Arizona rallied against the shaky Atlanta bullpen. The Braves squandered a massive, knee-buckling homer by Ronald Acuña Jr. and another strong start by Max Fried.

Johan Camargo's three-run double in the fifth put the Braves ahead. Fried finally gave up his first earned runs of the season but left with a 5-2 lead, only to watch the relievers give it away. Chad Sobotka and Jesse Biddle didn't retire anyone as the Diamondbacks pushed across four runs in the seventh to reclaim the lead.

After Ozzie Albies homered in the bottom half to tie the game at 6, Walker drove the second pitch from A.J. Minter (0-2) deep into the seats to start the ninth. Adam Jones brought home two insurance runs with a double that deflected off the glove of Acuña.

Yoshihisa Hirano (1-1) claimed the win. Greg Holland picked up his third save.

Hernandez singled off Twins reliever Trevor Hildenberger in the top of the seventh to give Toronto a 6-4 lead. Hernandez had capitalized against Minnesota's bullpen a day earlier, too, hitting a home run in the eighth inning that gave the Blue Jays a 5-3 win Monday.

The game ended with the Twins' C.J. Cron getting thrown out at home plate. Cron tried to score from first base on a double to left field by Byron Buxton.

Aaron Sanchez (2-1) allowed four runs in six innings to earn the win for Toronto. Reliever Trevor May (1-1) was charged with the loss for Minnesota.

MILWAUKEE (AP) — Christian Yelich hit a three-run homer, his eighth against St. Louis this season, to help send Milwaukee to the win.

Lorenzo Cain and Yasmani Grandal each homered in a five-run third against Jack Flaherty (1-1), when the Brewers went up 5-0.

Yelich's 427-foot homer to right center in the fifth inning was his ninth of the season and put Milwaukee up 8-0. He is the first player to homer in six consecutive games against the Cardinals. The Brewers have won nine of their last 10 against St. Louis, including four in a row.

Brandon Woodruff (2-1) held the Cardinals scoreless until Marcell Ozuna's two-run homer, his seventh, with one out in the sixth. Woodruff allowed two runs on seven hits in 5 2/3 innings, striking out six.

The Cardinals added two in the eighth on RBI singles by Yadier Molina and Kolten Wong.

Cabrera put Texas up 3-0 when his deep fly appeared to ricochet of the wrist of leaping right fielder Kole Calhoun and go over the 8-foot wall in the fourth off Jaime Barria (1-1).

Gallo pulled a 439-foot shot that landed on the concourse beyond the lower-level seats to greet reliever Dillon Peters in the sixth and make it 5-0.

It was the sixth homer of the season for both Gallo and Cabrera.

Yonder Alonso also homered and went 4 for 4 as the White Sox won for the fourth time in five games.

Lucas Duda homered for the Royals.

SAN DIEGO (AP) — Nolan Arenado homered for the third straight game — a two-run shot on his 28th birthday — and Jon Gray pitched seven strong innings as Colorado beat San Diego for a two-game sweep and its first three-game winning streak of the season.

Gray (1-3) allowed a home run in an NL-record 16th straight game when Wil Myers connected leading off the fifth, but otherwise tamed the Padres, who have lost three straight for the first time this season. Gray improved to 9-3 lifetime against San Diego by holding the Padres to one run and three hits while striking out five and walking three.

Rookie Garrett Hampson hit his first career-homer and Raimel Tapia had a two-run triple for the Rockies.

Charlie Blackmon hit an RBI double in the second and Tapia a two-run triple in the third. Trevor Story had a career-high three stolen bases.