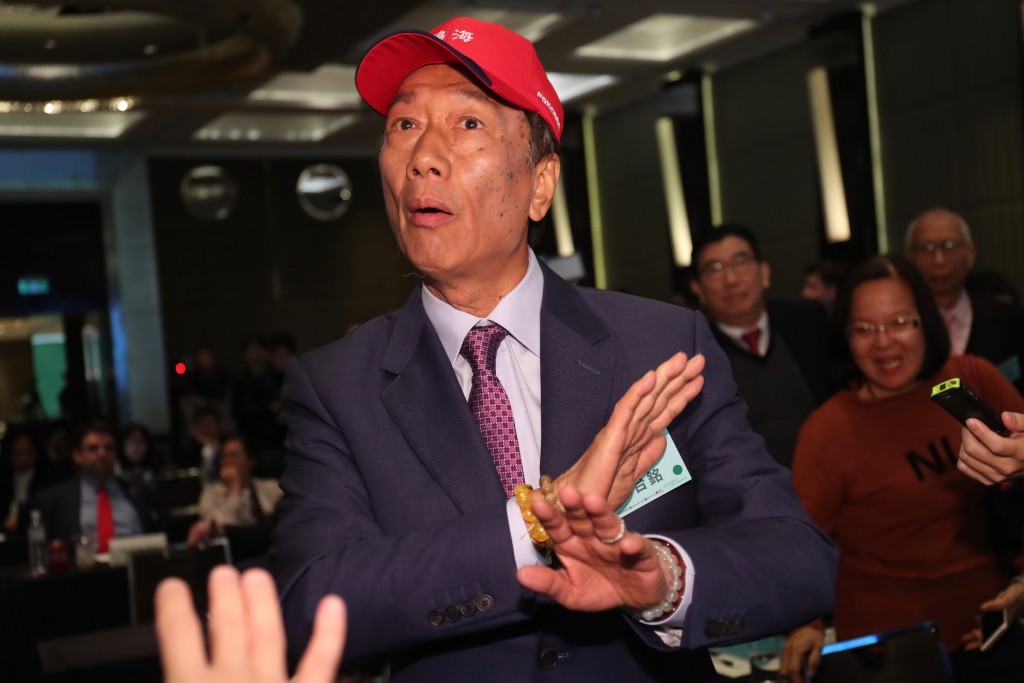 TAIPEI (Taiwan News) -- Foxconn founder and chairman Terry Gou (郭台銘) stormed out in a huff after a Democratic Progressive Party (DPP) legislator allegedly failed to make eye contact with him when responding to a question he had posed at a forum held by the American Institute in Taiwan (AIT) today.

During a question and answer session held today at the 2019 Indo-Pacific Security Dialogue, which was hosted by the AIT, Gou chastised DPP Legislator Hsiao Bi-khim's (蕭美琴) for being "rude" because she "did not look at me in the eye when she answered my question." Incensed, he shouted, "She not only dared not face me, but also dared not face the Republic of China [Taiwan]," and then indignantly stormed out of the room, reported CNA.

However, Gou was not satisfied. During the intermission, Hsiao attempted to communicate with Gou, but he did not believe she had adequately answered his question "How does Taiwan go out?" Gou then criticized her for "not looking at me when I asked a question," and "not only not daring to look at me in the face, but also not daring to look at the Republic of China [Taiwan]," according to the report.

Hsiao tried to explain that the seminar was a full-scale seminar, not a personal dialogue. However, Gou continued to criticize her, "I'm sorry that you don't have such a great person.," according to CNA.

Gou then roared, "If one person has all the say, then why am I here?" Gou then angrily stormed out of the venue, according to local media reports.

Daniel Runde, Senior Vice President at the Center for Strategic and International Studies, a think tank in the U.S., said in his second speech that Hsiao did not deserve to be treated in that way.

At 11:58 a.m., Hsiao posted her side of the story on Facebook and said that Gou had asked her "Is the key to Taiwan's economic development in Chin or the U.S.?" She responded by saying that it was not a matter of choosing one over the other.

She said that she welcomed economic exchanges with China, but if there were political prerequisites for economic exchanges, it would be a problem. She said it would be necessary to balance economic and trade relations with Southbound Policy countries and the U.S., so as to allow the economy and innovation to freely align with the world.

In response to Gou's claims that she failed to make eye contact with him when answering the question, she said that she tried to greet him, but he rebuffed her gesture and stormed out with the media in a huff. Hsiao said that one reason she did not look at him directly was because the stage lights in the conference room were very bright, which made her unable to see where exactly in the audience Gou was standing.

She said that the second reason was because it was a seminar, and she felt it was more appropriate to speak to the audience as a whole, so she looked around the room at the crowd, rather than fixing her gaze on him. Hsiao said that she was sorry if Gou felt that she had disrespected him, it was not intentional, and she respects the opinions expressed by him.

In an interview with the media after the meeting, Gou said that he wanted to ask was "Given that Taiwan must participate in regional economic organizations, how can this knot be untied?" He then took to Facebook to say that his question was "whether the key to joining these agreements was Washington or Beijing?"

He said he did not receive an answer, so he had no choice but to leave. He then wrote, "When talking about the regional strategy, if you don't even know the answer to questions, how can you talk about your strategy?"