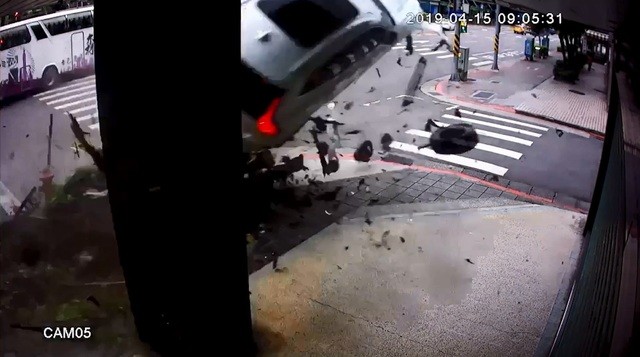 TAIPEI (Taiwan News) -- A motorist died after his Volvo SUV went flying two stories into the air on a Taipei street on Monday morning (April 15).

When coming off an exit ramp in Taipei on Monday morning, a brand new Volvo XC60 suddenly crashed into several parked scooters and trees before going airborne up to two stories off the ground and sailing through a signboard and colliding into a cement wall. The 44-year old driver surnamed Chiang (姜) was not showing any vital signs when rescuers arrived on the scene and was rushed to a hospital, where he was declared dead, reported Apple Daily.

After reviewing surveillance video footage, police found that at 9:00 a.m. Monday morning Chiang's white Volvo came barreling off an exit ramp of the Jianguo Expressway onto Jianguo South Road at a rapid speed. The car was already starting to swerve and failed to decelerate as it left the exit ramp. The Volvo first smashed six parked scooters before launching two stories in the air, blasting through a second-story sign, ricocheting off the cement wall of a building, and finally coming to a stop. Passersby heard the loud crashing sound and alerted authorities.

When firefighters arrived on the scene, they found that Chiang was trapped in the driver's side of his vehicle. He had suffered severe head trauma, was not breathing, and had no pulse.

Firefighters used a hydraulic rescue tool to pluck Chiang from the crumpled car and rushed him to National Taiwan University Hospital. However, doctors were unable to resuscitate him.

Police blocked off the scene, which was a tangled mess of downed trees, broken signs, crushed scooters, and scattered debris. Judging from surveillance video footage, police believe that Chiang had not applied the brakes when driving off the exit ramp.

At 1:17 p.m. on Monday, the Facebook group Car World (車界) posted video of the crash and wrote that the driver had told members of the group that he had a history of cardiovascular disease and had purchased the car for its safety record. Prosecutors have completed a preliminary examination of the crash scene and an autopsy will be performed on Chiang to determine the cause of death.

The cause of the accident is still under investigation.