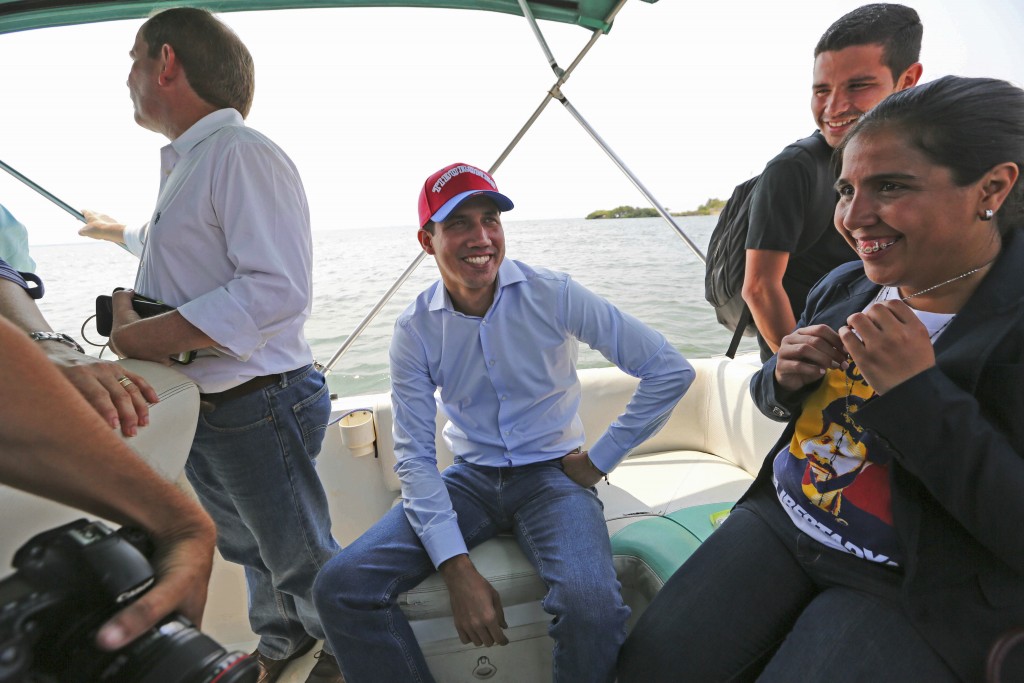 MARACAIBO, Venezuela (AP) — Obstacles have met Venezuelan opposition leader Juan Guaidó at nearly every turn since he declared presidential powers in a bid to end socialist President Nicolas Maduro's rule, and his visit to this once-thriving oil center was no different.

He was forced to take a boat to outmaneuver police roadblocks and reach throngs of supporters waiting to hear him speak in the sweltering heat in Maracaibo, a city now infamous for its blackouts.

Security forces had blocked the bridge across Lake Maracaibo just as Guaidó arrived on Sunday. Undeterred, the 35-year-old opposition leader and his entourage boarded a private boat and sped off across the water.

While Guaidó has gained backing from the United States and some 50 other nations, Maduro remains firmly entrenched nearly three months into the struggle for control of Venezuela. He has been stripped of his immunity and faces the looming threat of arrest — something Guaidó warned would be a "big mistake."

"It would only deepen the crisis," Guaidó told The Associated Press as the boat crossed the choppy waters. "The consequences would only hurt the regime."

Maracaibo, Venezuela's second-largest city of 1.5 million where refineries that once hummed with constant activity have fallen into disrepair, is a window into a nation that has plunged into chaos.

The power has returned for most of Venezuela after a massive power failure that blanketed most of the country's 30 million residents for days starting March 7. But Maracaibo hasn't bounced back.

The city is a crumbling version of its former self. Gushing oil wells that helped make a nation with the world's largest oil reserves flush with cash have given way to broken-down oil platforms in Lake Maracaibo that sit idle as nearby shores are black with oozing crude.

Maracaibo has endured rampant blackouts for more than a year, leaving residents of a city where temperatures regularly reach 100 degrees without air conditioning and refrigerators, spoiling food. In the streets, residents spend hours searching for water, and schools barely open.

Frustration spilled over for several days in mid-March, with mass looting by mobs that overran shopping centers sacking 523 stores — many of which have not reopened their doors.

Residents say they live in fear of a serious illness or injury. Doctors in the main emergency hospital tell patients to bring their own water to clean wounds and where even the most basic items like aspirin are lacking.

Guaidó's first visit to Maracaibo since declaring presidential powers on Jan. 23 comes at a time when he seeks to tap into popular frustration and anger to re-energize his campaign.

Some fear he's leading yet another fatally stalled opposition movement unable to break free from Maduro. Guaidó has failed to win a critical mass of the armed forces away from Maduro or bring in international shipments of humanitarian aid.

The masses of supporters who flooded the streets in the capital of Caracas immediately after Guaidó declared presidential powers aimed at toppling Maduro have begun to wane.

But in Maracaibo, a historic opposition stronghold, he was met Sunday by thousands who turned out at a series of rallies to hear him speak even as his voice turned hoarse. Several thousand followers waited more than four hours in the middle of one of the city's main avenues.

It comes as pressure on Guaidó is only tightening. The National Constituent Assembly, stacked with Maduro loyalists, withdrew Guaidó's parliamentary immunity earlier this month, opening the path to prosecute and possibly arrest him for allegedly violating the constitution. Days earlier Guaidó's chief of staff was jailed as an accused terrorist.

Guaidó said he has urged his international backers to adopt a stance of "zero tolerance" toward Venezuela's rampant corruption and the mismanagement of its resources.

Maduro boasts support from Russia, China and Turkey, but Guaidó dismissed that as "more of a show" than having any substance amid Venezuela's crisis. Guaidó refuses to negotiate with Maduro.

"There's no possibility of a dialogue with Maduro," Guaidó said. "He's the problem."

Given the fading anti-government protests and the opposition's open refusal to open a dialogue with Maduro, the option of some sort of U.S. military deployment — starting with efforts to bolster humanitarian aid deliveries to Venezuela — has been gaining strength, especially among some figures in Washington.

"It is becoming clear that we will have to consider the use of American military assets to deliver aid," Florida Sen. Rick Scott said last week at the American Enterprise Institute in Washington. "Maduro and his thugs have left us no choice."

The Trump administration is determined to see Maduro removed from power, preferably through diplomatic and economic pressure. The White House has slapped dozens of officials in Maduro's government with financial sanctions and targeted Venezuela's oil industry, its most important source of revenue. But while White House officials have repeatedly warned that "all options are on the table," no plan appears to be in place backing up the tough talk.

Reaching the other side of Lake Maracaibo, Guaidó hit another police roadblock. His entourage abandoned their own cars and turned to local residents to help them navigate around backroads.

Guaidó spoke at several rallies, urging Venezuelans not to give into Venezuela's collapsing public services. Rather, he said, they need to keep the protests alive throughout the country, rejecting Maduro's government.

"We're not going to bend our knees — if that's what they tell us to do," Guaidó said, as the mass of people cheered in support, shouting, "Yes we can!"