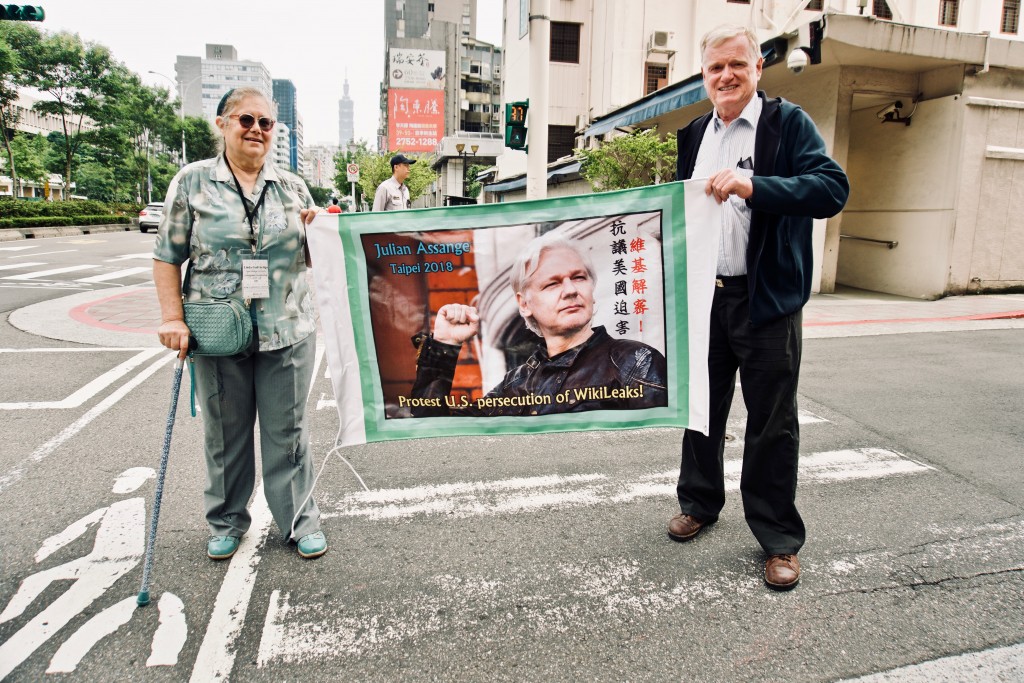 TAIPEI (Taiwan News) -- A small protest in support of Wikileaks founder Julian Assange was held in front of the American Institute in Taiwan (AIT) on Sunday (April 15).

The protesters gathered outside the AIT on Taipei’s Xinyi Road and unfurled a banner in support of the Australian, who was unceremoniously turfed out of the Ecuador embassy in London last week.

Veteran activist Linda Arrigo and Curtis Smith from the Trees Party (樹黨) were then told by security officers to move on or be arrested.

Assange spent seven years in the Ecuador embassy after seeking immunity from rape charges in Sweden and charges in the United States for “conspiracy to commit computer intrusion.”

Assange was arrested by police in London after Ecuador terminated his political asylum, complaining he had reneged on the terms of his “house stay” at the embassy.

The “flash protest” outside AIT did not have a permit and the participants could have been prosecuted for violating immigration laws meant to prevent “outside interests” from influencing domestic politics.

Speaking to “Taiwan News” after the protest, American Linda Arrigo said: “I was prepared to be arrested because this issue deserves to be elevated. It’s about the very serious issue of press freedom around the world and also the exposure of evildoing of governments, such as the collateral murder of civilians in Iraq.”

“What the U.S. is trying to do with Julian Assange is to punish the messenger and keep its dirty laundry hidden. Most of all, freedom of speech around the world is being muzzled.”

Canadian Curtis Smith, who was granted Taiwan citizenship last week, said he was supporting Assange because it was important to exercise his freedom.

“I’m here because I don’t want to see anyone bullied or punished. As for transparency, people say governments can’t run without secrecy, but I say, `let’s give it a go.’

“This is real democracy, it’s about people controlling the government and not vice versa,” Smith said.

“Julian Assange is exposing governments around the world and is being persecuted,” Arrigo added. “In regard Taiwan, it has got to have an international position on human rights. It’s not enough to say, `Take care of Taiwan.'"