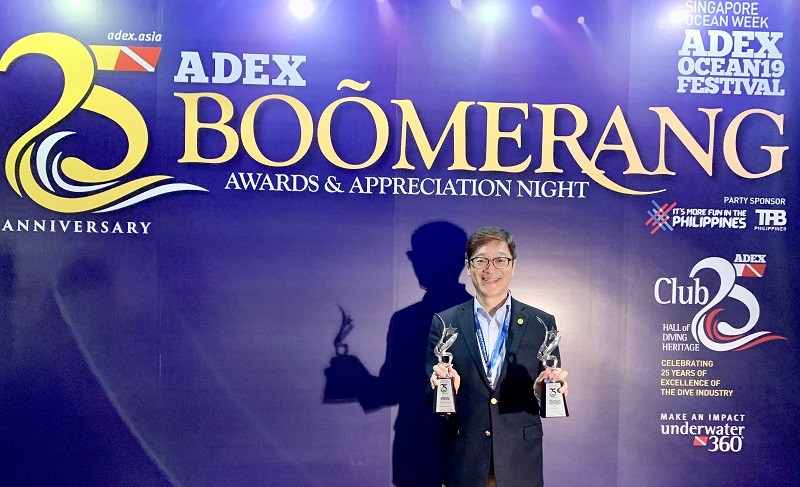 TAIPEI (Taiwan News) – Taiwan was selected as the 2019 Eco Destination of the Year by Asia Dive Expo (ADEX), the largest, and the longest-running dive show in Asia, as held in Singapore from April 11 – 14 this year.

Alongside the trade exhibition platform represented by diverse trade and business stakeholders such as dive operators, equipment manufacturers, and national tourism boards, the 25th ADEX show also gathered together scientists, marine conservationists, underwater photographers, and videographers from around the world, organizer of the show said.

Organizer said that this year’s “Eco Destination of the Year” award was given to Taiwan to honor its longtime dedication to the preservation of eco systems and environmental protection.

In addition, Director of the Singapore Office of the Taiwan Visitors Association (TVA) Trust Lin (林信任) won the "ADEX Award for Outstanding Contribution of Dive Tourism.”

Lin won the award for his efforts in promoting sustainable marine tourism when he was stationed on Taiwan’s east coast, as well as for his leadership in bringing Taiwan to the dive expo for the first time, the organizer said.

Lin dedicated his award to all the government agencies and colleagues in Taiwan who had participated in conducting ecological surveys, cleaning up the ocean and beaches, planting trees, protecting crabs, and reducing carbon emissions and plastics. He especially thanked the civilian volunteers who helped pull out large amounts of debris, including sheet metal houses that had been blown out to the sea by typhoons, as well as skim off leaked oil that covered coral reefs around Green Island off southeastern Taiwan.

Lin said that the ADEX show is 25 years old, yet Taiwan participated in the show for the first time last year. Even so, Taiwan was selected as the show’s 2019 Eco Destination of the Year, which will be helpful in promoting Taiwan’s dive tourism to international markets, he added.

He said he also plans to arrange for Taiwan to participate in the Australia International Dive Expo (AIDE) in the future. The trophies of the 2019 'ADEX Eco Destination of the Year' and the 'ADEX Award for Outstanding Contribution of Dive Tourism.' Director Trust Lin (left) and volunteer divers clean up large debris of sheet metal houses blown out into the sea by typhoons.