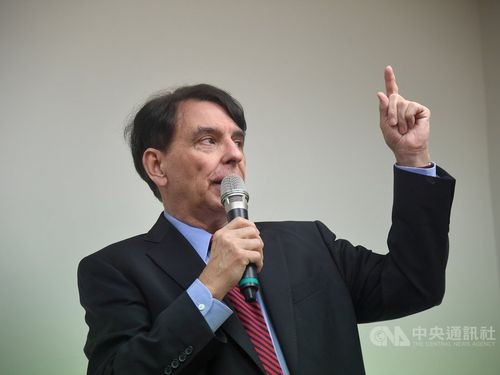 A former U.S. official urged Washington Sunday not to refer to its "one China" policy in a diplomatic setting when it comes to cross-Taiwan Strait relations, as it is confusing and misleading.

"There are a lot of other measures that the U.S. could unilaterally adopt," said William Stanton, former director of the American Institute in Taiwan's Taipei office, while giving a keynote speech in a seminar held by three pro-independence organizations -- the Taiwan New Century Foundation, the Taiwan New Constitution Foundation and the Taiwan Statebuilding Party.

"So you shouldn't say, 'well, in accordance with our one China policy,'" he urged in the seminar titled "Taiwan's Challenges and Opportunities amid Challenging Global Circumstances: Reflections on the 40th Anniversary of the Taiwan Relations Act."

Stanton contended that Washington should focus more on the Taiwan Relations Act (TRA) and Six Assurances, rather than the Three Communiques jointly issued by the United States and China, to deal with the so-called Taiwan issue.

"We should also stop referring to the Three Communiques as if they're the Bible and we're referencing something that's holy," he said.

"As I pointed out, one is factually incorrect, one was effectively repudiated, and it was never observed in any case, so stop it.

"China can refer to it, OK. We should refer, as we're doing more and more in Congress, to the Taiwan Relations Act and the Six Assurances," Stanton said.

The TRA, signed into law April 10, 1979, and the Six Assurances, agreed to by U.S. President Ronald Reagan in 1982, are the foundation for U.S. relations with Taiwan.

In his speech Stanton also called for high-level exchanges between officials of the two countries, as "it's been said numerous times now in various congressional resolutions."

"But I don't think we should advertise it and it should always be at the discretion of Taiwan to decide, because it bears the greatest risk if there's a reaction from China."

"The main thing is to have higher-level contact, both in Washington and here. So we could be more discreet about it. Same thing, we shouldn't announce arms sales to Taiwan, just do it; we don't have to tell anybody."

Asked to comment on the competition between President Tsai Ing- wen (蔡英文) and former Premier Lai Ching-te (賴清德) to seek the ruling Democratic Progressive Party's (DPP's) nomination to run for the presidency in 2020, Stanton said he is not in a position to talk about that.

The retired career diplomat, however, pointed out that there is a divide within the DPP.

"I will say that I think that Tsai Ing-wen sometimes is under-appreciated," said Stanton, noting that he knows and respects both Lai and Tsai.

"I know that some people want more radical solutions, but I also know that there are people in Washington who encourage her to be cautious, because it becomes unpredictable what will happen."

"It's a very difficult position to be president of Taiwan," he said. "You're sort of damned if you do and damned if you don't. And I think people ought to be sympathetic to that and once you have the power and responsibility you need to think carefully before you do anything."