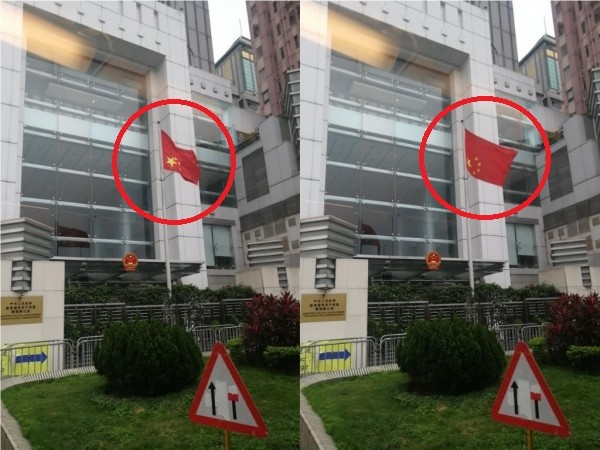 Hong Kong netizens reported first spotting China's banner hanging upside down in front of the Hong Kong Liaison Office at 7 a.m. this morning. Some speculated that it could signify a declaration of war on Xi Jinping, while others dismissed it as merely a blunder.

Hong Kong student activist and politician Joshua Wong (黃之鋒) also posted the photo on his Facebook page this morning, and the image soon spread to the popular online forum HKGolden. Some netizens noticed that the flag had returned to its upright position by 10 a.m. this morning.

Netizens then left a flood of comments trying to decipher the meaning of the incident:

"Down with Xi up with Leung." Leung Chun-ying (梁振英) was the previous Chief Executive of Hong Kong whose controversial government policies sparked the "Umbrella Revolution."

"Leung Chun-ying's friend has made a move."

"Obvious violation of the flag law, strongly requesting the Attorney General to handle it."

Hong Kong commentator Martin Oei (黃世澤) wrote on his blog that the incident was unusual. The Hong Kong Liaison Office is not a relevant office of the Hong Kong government and represents China's central government, wrote Oei.

Oei wrote that he is confident that once this incident is discovered by the Chinese government, Wang Zhimin (王志民), the Director of the Hong Kong Liaison Office, will be in danger of "losing his head."

On Sunday (March 24), during Kaohsiung Mayor Han Kuo-yu's (韓國瑜) trip to Hong Kong and Macau, he met with Wang Zhimin and Director of the Macau Liaison Office, Fu Ziying (傅自應). The unprecedented meetings with communist officials by an acting Taiwanese mayor caused alarm in both Hong Kong and Taiwan. At 10 a.m. the flag appeared to have been placed upright. (Photo from Facebook)