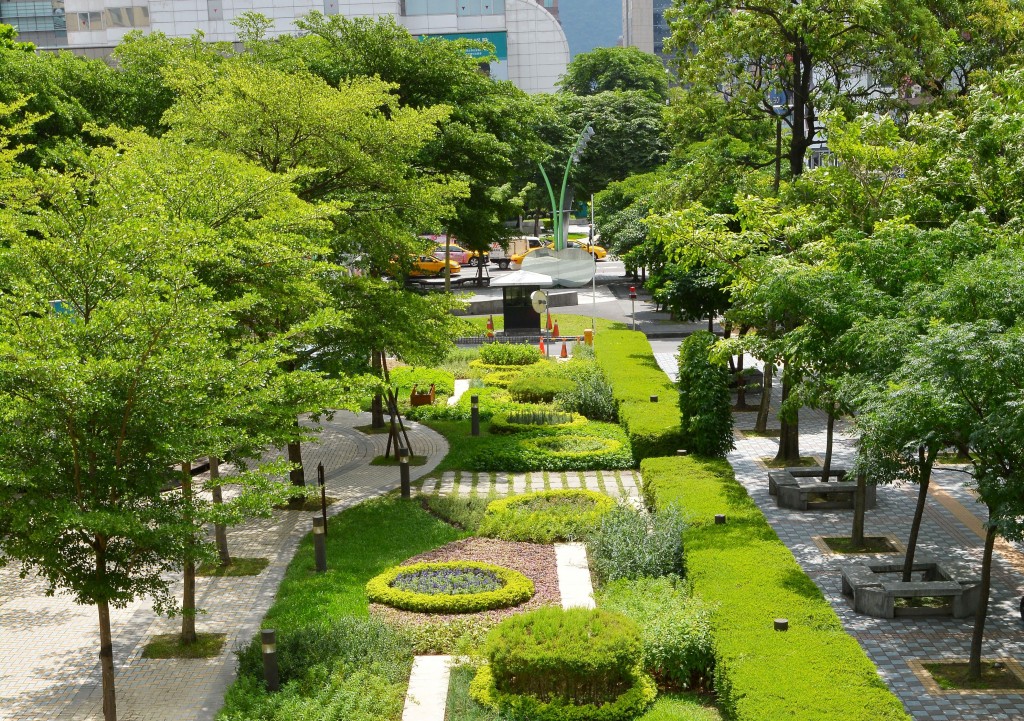 Five years have passed since then and the question is: Has he kept his promise and brought back nature to Taipei to make a Farm City?

With more than 7.4 million residents in the Taipei-New Taipei metropolis, serious air pollution derives from motor vehicles and suburban factories, which threatens the health of every city dweller.

Particulate air pollution allegedly causes 3.2 million premature deaths annually worldwide.[1] One of the best urban policies to tackle this issue is greenery, which is cost-effective and beneficial.

There is strong evidence that nature offers remarkable benefits to a city.[2] Gardens by the Bay in Singapore, The High Line in New York, Stanley Park in Vancouver, have all shown this. Hence, “making the city green again” was officially introduced to Taipei in 2015.

“This farm is definitely an invaluable asset,” said Felly Tsai, a 66-year-old retiree living in Songshan District, Taipei. “It is a communal area for neighbors to mingle with and to know one another better. People were also delighted to know where the food on their dining table comes from.” She volunteers at the Happiness Farm (幸福農園), one of the most visited and prosperous farms under the Farm City project.

Most residents recognize these city farms as a non-toxic food source and recreational areas for the neighborhood. City farms like this are emerging on the rooftops of public buildings and at schools around the city. The photo shows the Happiness Farm in Sonshang District

“Initially, this project was initiated to stimulate community awareness and to beautify the city,” said Shilun Huang from Napcufarming, an NGO that lobbied for the Farm City project during the mayoral election.

“It’s true that a sense of belonging has been widely established within the community because of these farms, but the reason why most people volunteer is because they expect to bring their veggies home one day. Not everyone thinks about the connection between these farms and the urban ecosystem.”

This phenomenon seems to explain why this policy hasn't revolutionized our street views – as the majority of them are still occupied by parked motorcycles or advertising hoardings.

Currently, there are restrictions on the potential use of farmlands and eligible owners (limited to unincorporated body and associations),[1] so there is a long way to go before the fruits of the project can be fully appreciated.

Until recently, only some farms were built by citizens and it appears government intervention is still indispensable.

Even so, on the other side of the world, a huge number of green fingers are leveraging their inherited aesthetic consciousness and civic awareness to transform the most romantic city in the world into a verdant cosmopolitan hub.

The French capital of Paris chose to coordinate with its citizens against the urban environmental crisis. “Le permis de végétaliser,” that is, the “license to vegetate,” is an initiative that encourages Parisians to treat the entire city as their own garden.

Before 2030, the city government aims to plant 20,000 new trees and roll out 100 hectares of vegetation across the city’s street corners, walls, and rooftops.

In order to procure the license, there are several steps to follow[2]:

1. Choose a public space, such as the façade of municipal amenities, sidewalk tree bases, or even bus shelters, with the ideal plants you want to grow.

2. Sign a “vegetation charter” to ensure the commitment of ecological gardening is guaranteed: weed manually and never resort to pesticide.

3. Once the plan is approved, usually within one month, gardeners will receive a kit in which seeds and potting soils are provided.

4. Voilà, you are within your rights to vegetate your favorite spot in the city.

“Besides the closer relations among neighbors, the unlimited creativity of citizens is what surprises us the most,” said Pénélope Komitès, leader of the green spaces department in Paris City Hall. “The dose of greenery not only brings the city to life, but also helps to allay the unbearable summer heat derived from global warming, air pollution, and increasing population in Paris.”[3] Build the city we imagine

Given more freedom to decide where and what to plant, the plantation in Paris is no longer restricted to certain designated spaces like parks or schools. Instead it has spread out to the entire city and entered everyone's daily lives.

This is what we lack in Taipei. People can always create remarkable results when they own the opportunities to make the best of their city.

Greenery means more than just planting trees, the approaches taken and the motivation of participants will determine its outcome. We all wish to live in a city where the air is fresh, the temperature is moderate, and plenty of green is shared and enjoyed by all residents.

Most importantly, this city should be the collective, green masterpiece we have always imagined.