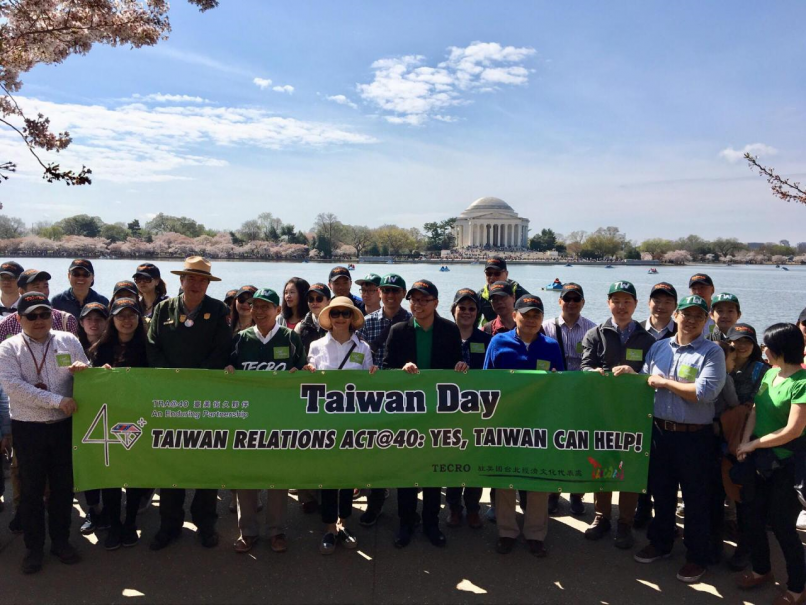 Taiwan Day was staged April 7 in cities across the U.S. to commemorate the 40th anniversary of the Taiwan Relations Act (TRA40) and celebrate the enduring partnership between the two sides.

Organized by Taipei Economic and Cultural Representative Office in the U.S., the event in Washington comprised a cleanup conducted in cooperation with the U.S. National Park Service. Some 50 volunteers and their families, including TECRO Representative Stanley Kao and staffers, helped gather recyclables at the Tidal Basin, site of the ongoing U.S. National Cherry Blossom Festival.

Speaking at the event, Kao said that the TRA provides the solid foundation and legal framework for robust Taiwan-U.S. ties. The staunch U.S. commitment to Taiwan under the act has forged steadfast relations that are closer and stronger than ever before, he added.

According to Kao, Taiwan stands as a beacon of freedom in the Indo-Pacific. This was recently affirmed by U.S. Secretary of State Mike Pompeo, when he described Taiwan as “a reliable partner, a democratic success story, and a force for good in the world,” he said.

Thanking participants, Kao said that Taiwan not only makes positive contributions in the international arena, but also in local communities, adding that the cleanup served as an appropriate way to express gratitude and show that “Yes, Taiwan Can Help.”

In addition to Washington, Taiwan Day events marking TRA40 were organized by 11 Taipei Economic and Cultural Offices across the U.S. Similarly designed to spotlight the nation’s culture and demonstrate Taiwan can help, they spanned such activities as beach and street cleanups, charity auctions, hikes, movie festivals, orphanage visits and the provision of free medical services.

The TRA was signed into law April 10, 1979, following the switch of recognition from Taipei to Beijing by the U.S. It authorizes the continuation of substantive relations between the two sides in the absence of diplomatic ties, and is an important factor in preserving Indo-Pacific peace, stability and security.