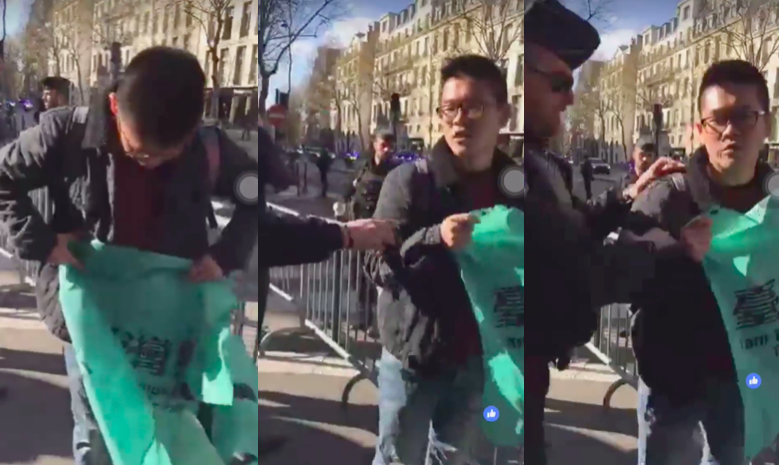 TAIPEI (Taiwan News) — A Taiwanese exchange student in Paris was briefly detained by police for waving an independence banner during Xi Jinping’s recent procession through the European capital.

Sciences Po student Po-han Wu (吳柏翰) on March 27 uploaded a video to Facebook that shows him unfurling a pro-independence flag before being immediately accosted by a police officer, who tackles the flag away from him. The beginning of Xi’s motorcade can be seen in the background.

Wu told independent French media outlet The Observers that he was forced against a wall and searched before being held in a police van for over an hour. The officers told Wu that while on an ordinary day people can demonstrate freely in the city, instructions had been given from higher up to suppress any protests on that particular day.

Wu said the officers returned his passport and student card but refused to give back his banner.

The student said he intended to show Xi Jinping and the world “the determination of the Taiwanese people for the search of independence, freedom and democracy.” Wu admonished France for being complicit in China’s suppression of dissenting voices, and questioned if the country still symbolizes “Liberté.” It is not unusual for protests in Western Europe to be suppressed during official visits from China.

Tibetan freedom protestors were detained during Xi’s visit to Geneva in 2017 to “secure safety.”

During Xi’s visit to the U.K. in 2015, a number of Tibetan exiles and Chinese dissidents were arrested, had their houses searched and computers seized for demonstrating against the Communist Party leader.

Xi concluded a three-day sojourn to Paris on March 26. He was treated to an official welcome by French President Emmanuel Macron at the city’s Arc de Triomphe, and a formal dinner in Nice, Voice of America reports.

The Chinese President recently toured Europe in a bid to persuade leaders on board the Belt and Road infrastructure-building project.