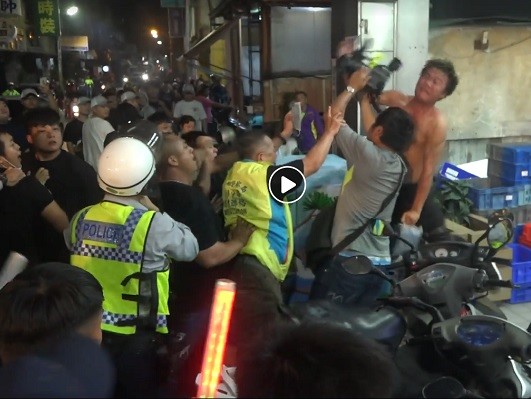 TAIPEI (Taiwan News) -- A video has surfaced showing the complete chaos that ensued when notorious former gang leader and current head of the Chinese Unity Promotion Party (CUPP, 統促黨) Chang An-le (張安樂), aka the "White Wolf," carried the sedan bearing a statue of Matsu for 10 minutes at the Dajia Matsu Pilgrimage Procession in Changhua, Taiwan on Monday (April 8).

In the video posted by Facebook user Chia-lun Chang at 11:30 a.m. this morning, the mighty "human walls" of police have collapsed and a rapid crowd can be roaring with fury as they hurl bottles and other debris. The editor of the video slows down the footage for extra effect each time projectiles are hurled from one direction or another.

Next, the video cuts to a shirtless man being dragged to an ambulance and a fierce exchange breaking out between men clad in black shirts and paramedics. The man can then be seen sprawled on the pavement with medics tending to him.

Suddenly the crowd becomes more enraged when they spot a CtiTV News reporter trying to shoot video of the man. Soon the enraged mob swarms toward the reporter and one person launches a water bottle at him.

As he tries to lean away from the crowd and keep his costly camera out of their reach, a shirtless man with dyed blonde hair leaps from behind and slaps the camera with his right hand.

Undaunted by his first failed attempt, the video switches to slow motion as the ruffian jumps even higher and pummels the hapless reporter's camera to the ground. The video slows down again to reveal a stout man in a black shirt throwing a punch at the embattled reporter's head.

Police then finally manage to drag the rabble-rousers away from the reporter, while the assailant behind him gets one last cheap shove in. The video closes with people apparently trying to use water to flush pepper spray out of their eyes, including a small toddler being carried by an adult.

The author of the Facebook video post wrote that Changhua County Police Department Captain Fang Yang-ning (方仰寧) had deployed 1,200 police officers at the intersection of the Mingsheng underpass Sanmin Road. He wrote that the arrival of "White Wolf" Chang and his CUPP followers was suspected to have instigated the riot.

However, he cited Shih Ming-piao (世明表), vice-captain of the Criminal Investigation Corps of Changhua County, as saying that Chang's presence was "irrelevant" and blamed outsiders who had come to work in Changhua for causing the ruckus.

Chang brushed off the violence by saying "That shows everyone's enthusiasm," according to the Apple Daily. He added that the beliefs cause emotion and that they were too enthusiastic, inevitably leading to conflict.

Chang immediately left the scene after the incident and police took 20 people in for questioning early this morning. Four of whom have been initially arrested for assault and are still being questioned.

Video posted by Chia-lun Chang of the violence near the Mingsheng underpass:

More violence recorded in Changhua last night during the pilgrimage: 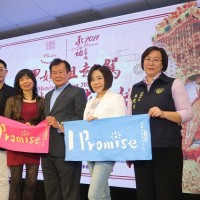 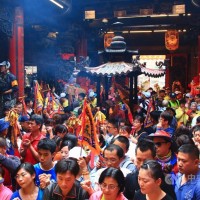