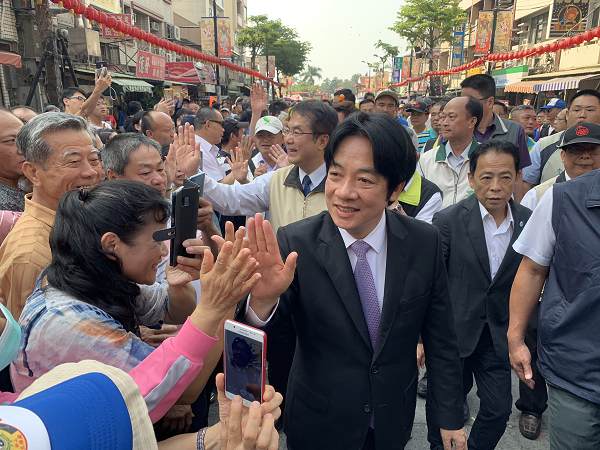 In recent days, the former premier of the Tsai administration has been touting his platform of “Three Constants” of “Three Unchanging Items” (三不變), which include standing by his bid for the DPP nomination, standing by the people and the country, and standing by the DPP’s primary process, which Lai says should not be changed.

Liberty Times reports that there are rumors within the DPP, with some suggesting that the party, under the leadership of Cho Jung-tai (卓榮泰), may be considering altering the primary selection process to determine the party’s nominee.

Currently the two candidates competing for the DPP nomination are the incumbent President Tsai Ing-wen and William Lai, with the selection process expected to be completed on April 24.

Some rumors suggest that the DPP and perhaps William Lai, may be under pressure from the United States to cede the nomination to Tsai Ing-wen, because Lai may be seen as a risk to U.S.-Taiwan relations and cross-strait stability for his outspoken comments on supporting Taiwan’s de jure independence.

Lai, who appears as a young, capable, and incorruptible leader within the DPP, has consistently emphasized that he is committed to the cause of liberty and the democratic spirit which the DPP has always represented.

He has also made it clear that, as a leader, he recognizes the importance of close and stable relations with the U.S. and regional partners. He has consistently maintained that protecting Taiwan's national sovereignty is his priority, and recently expressed his gratitude for the support the U.S. has shown Taiwan, reports UDN.

On a tour of a Sea Mild Biotechnology facility Monday, Lai emphasized that by allowing fair and transparent nomination process, the DPP and Chairman Cho can establish a precedent and even a new cultural tradition for Taiwan by enabling popular democratic choice to determine the party’s nominee, reports CNA.

Regardless of who ultimately qualifies for selection as the DPP nominee for the upcoming 2020 presidential election, Lai asked all voters to support the party’s decision in the spirit of democracy.

Both Lai and DPP Chairman Cho have warned the party against factionalism ahead of the presidential primary selection process.