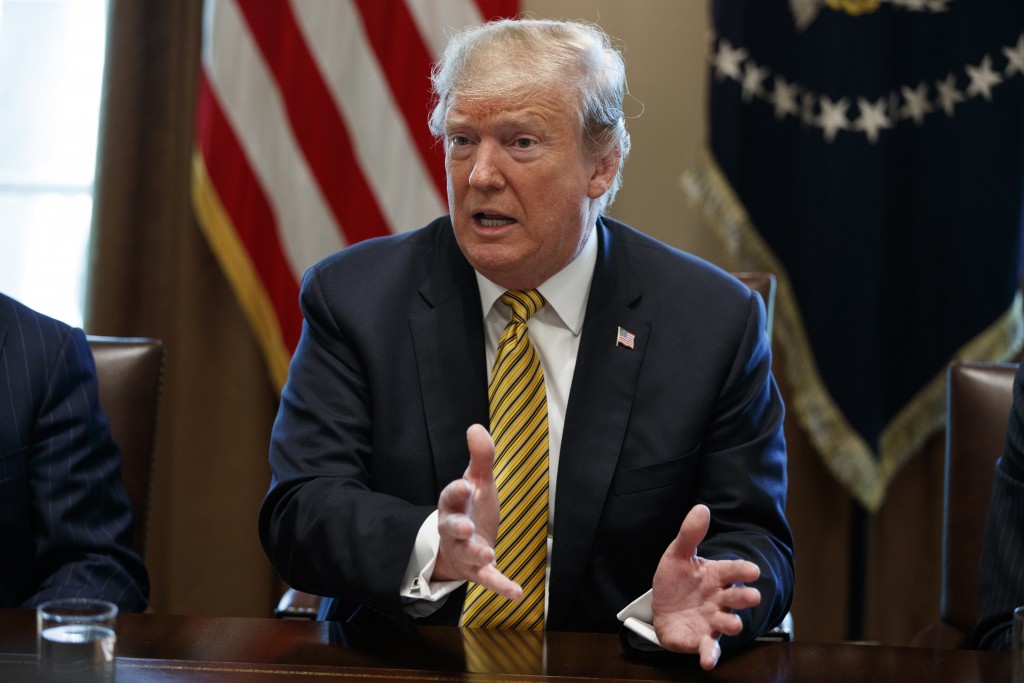 WASHINGTON (AP) — President Donald Trump is well on his way to raising the $1 billion his campaign believes it will take for him to win another term in the White House, building a fundraising machine that will prove difficult for Democrats to match.

Trump's bring-it-on fundraising approach — which will be on display during a stop in Los Angeles on Friday — is a far cry from his stance in 2015, when the billionaire reality TV star and developer launched his first bid for president promising to use his own money to finance his campaign. It's also an indication of how he has made his political apparatus more professional for Round 2.

For all presidents, incumbency has its advantages. Trump, who formalized his re-election effort the day after he took office, moved especially early to leverage his incumbency for 2020.

As Trump brings in millions, his would-be opponents are scrambling to raise enough money to earn themselves a spot on the primary debate stages. And the Democratic National Committee remains in debt from previous campaigns.

"Whoever the Democratic nominee is, they'll be depleted, and they'll have to start from zero — well under zero, the DNC has a debt," said Michael Glassner, the Trump campaign's chief operating officer. He called Trump's decision to keep the campaign in operation during his first two years in office the "new model" for future presidents.

Through the end of 2018, the last date for which figures are publicly available, the Trump campaign had brought in more than $129 million. President Barack Obama, by comparison, didn't even begin his 2012 re-election campaign until 2011. The Trump camp is scheduled to release its first quarter fundraising results later this month, so far only teasing that the campaign's cash on hand this period will be "far beyond" the more than $19 million in the bank it reported at the end of 2018. The RNC, for its part, is promising to report a first quarter record for a nonpresidential year.

Trump is traveling to Los Angeles on Friday to raise money for his campaign and the Republican National Committee. Dinner tickets run $15,000 — or $50,000 for a photo with the president and $150,000 to participate in a roundtable with the president. The RNC says 170 people are expected to attend.

Trump's fundraising is divided between two entities: Trump Victory, the joint account used for high-dollar gifts, and Trump Make America Great Again Committee, the low-dollar digital fundraising operation known internally as "T-Magic." The campaign is set to launch a traditional "bundling" program — which it lacked in 2016 — in the coming weeks. Bundlers are mid-tier donors who bring in contributions from their associates.

Republicans have trailed Democrats in online fundraising ever since the medium was invented roughly two decades ago. But Trump has closed the gap, driving small-dollar donors who make recurring donations to the GOP like the party has never seen before. It's a phenomenon the party is moving quickly to try to take advantage of, as it prepares to roll out "Patriot Pass," its competitor to the Democratic fundraising website ActBlue.

In 2015, Trump swore off outside funding, declaring in his opening speech: "I'm using my own money. I'm not using the lobbyists'. I'm not using donors'. I don't care. I'm really rich."

He quickly reversed course on high-dollar donations after he won the GOP nomination, bowing to the financial pressures of running a general election campaign, and he'd already raised millions online through the sale of merchandise like his signature red Make America Great Again hats.

Trump gave or loaned $66 million to his 2016 campaign and often flashed frustration if he felt his money wasn't being put to good use. Trump advisers and allies explained that the president, who largely kept out of the particulars of the campaign's field, data and advertising efforts, didn't fully appreciate the need to raise heavily for his campaign and the RNC until his victory on election night. That secured his early buy-in for their more expensive 2020 plans, they said.

Still, Trump hasn't put any money into the 2020 effort so far, and aides don't expect that to change. Since his inauguration, though, he's participated in 55 high-dollar donor events, according to the RNC.

The campaign has benefited from continuous operation since 2015, said RNC Chairwoman Ronna McDaniel, giving fundraisers time to "integrate and fine-tune our operations."

The timing also has allowed the campaign to continue prospecting for new donors and maintain its existing roster by fundraising off big events such as the contentious Supreme Court nomination hearings for Brett Kavanaugh and passage of the tax reform bill.

McDaniel said there have been more than 1.1 million new donors since Election Day, and 100,000 just in January. She added that there have been at least seven days with seven-figure small-dollar hauls so far this year.

"The cohesive and coordinated effort between the campaign and the RNC is something that hasn't happened this seamlessly since at least Bush '04," said RNC senior adviser Katie Walsh, a former deputy chief of staff at the White House.

Trump plans to continue his fundraising push in Texas next week, with stops in San Antonio and Houston. Trump campaign manager Brad Parscale has predicted the campaign will spend $1 billion in 2020, about three times what it spent electing Trump in 2016.

Comparing Trump's 2016 and 2020 fundraising efforts, GOP fundraiser and Trump donor Dan Eberhart said it was "completely different." The oil industry executive noted that Trump was on the outside last time, competing with a host of candidates, whereas this time "the vast, vast majority of Republican donors are rowing in the same direction."

"It's understood we either win with him or we won't win," Eberhart said. "Nearly everyone is on board."