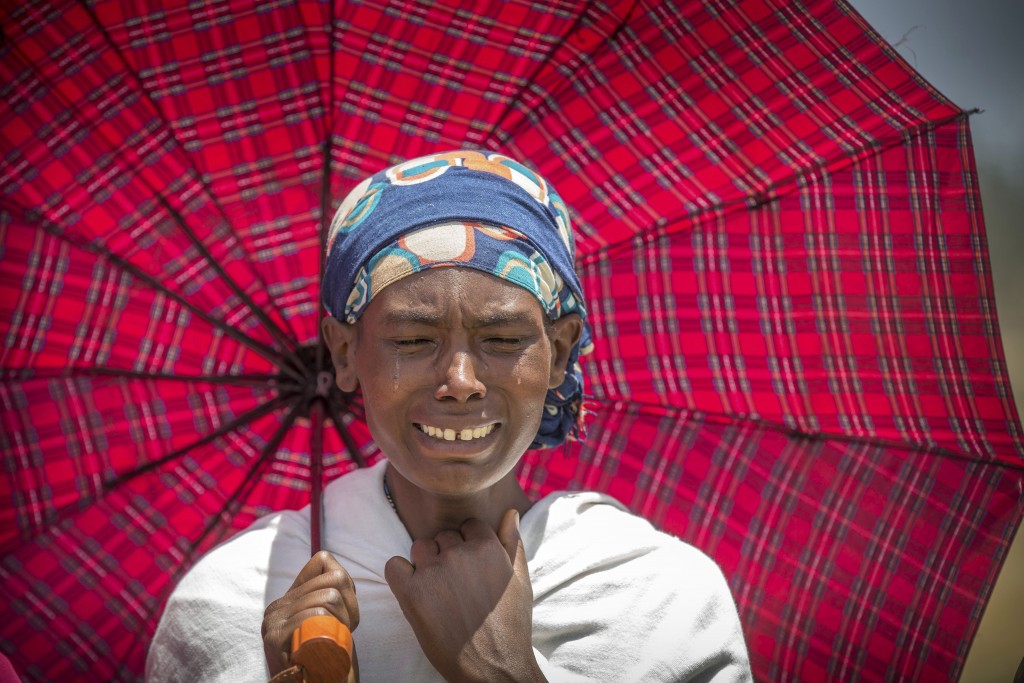 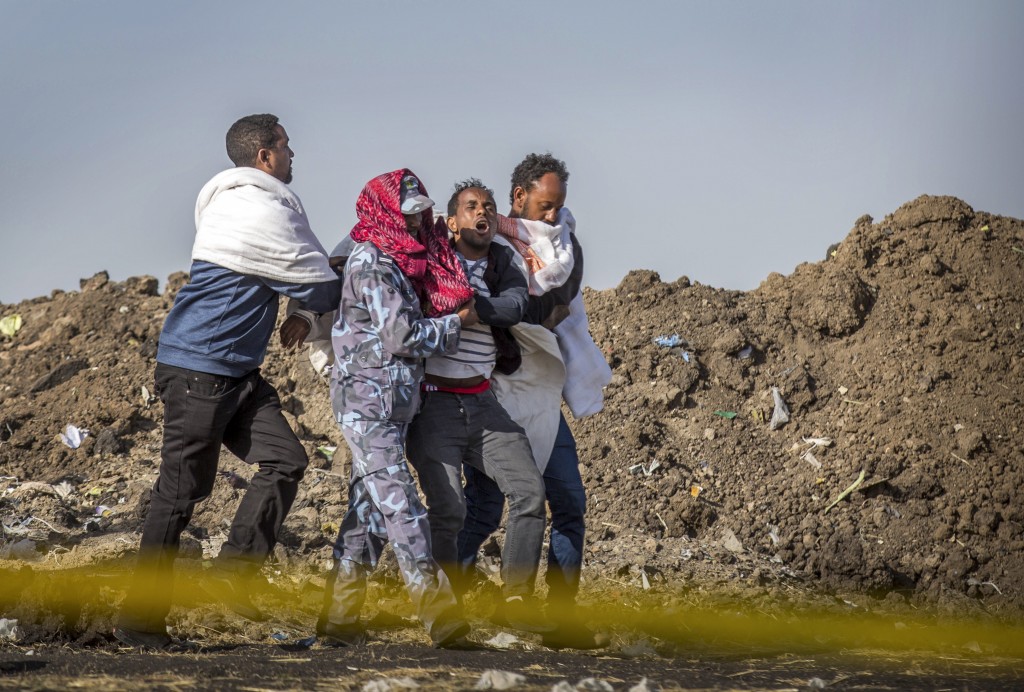 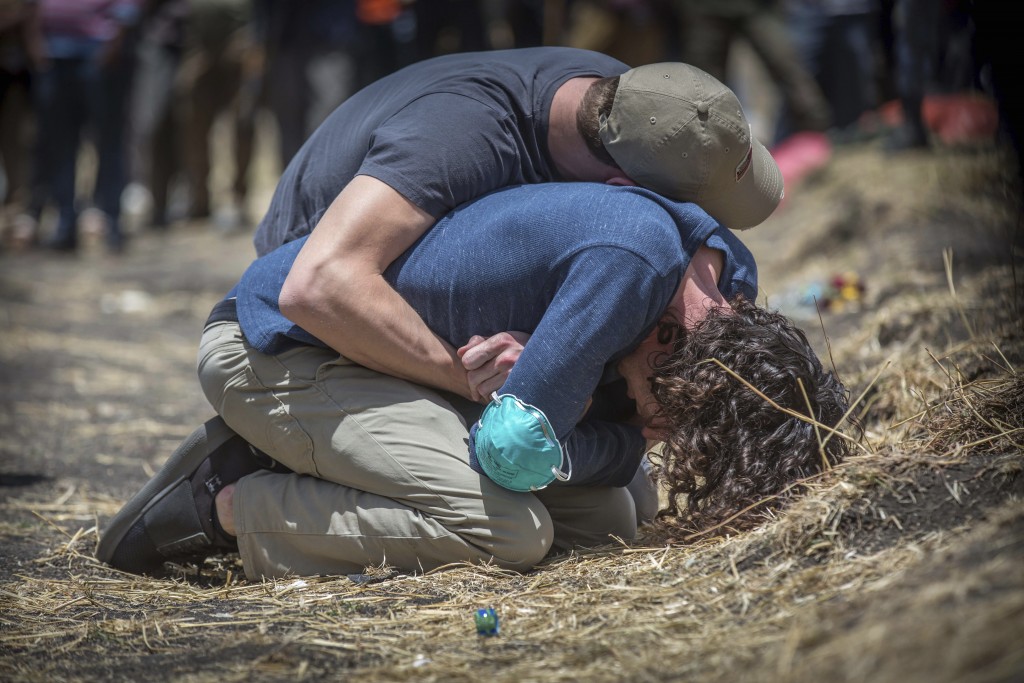 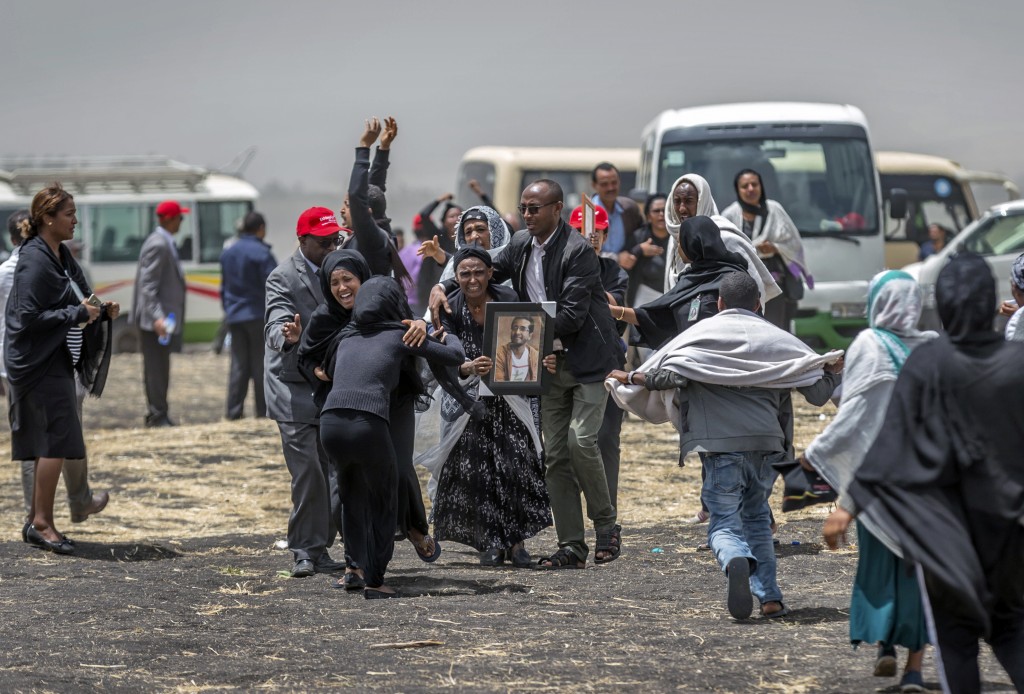 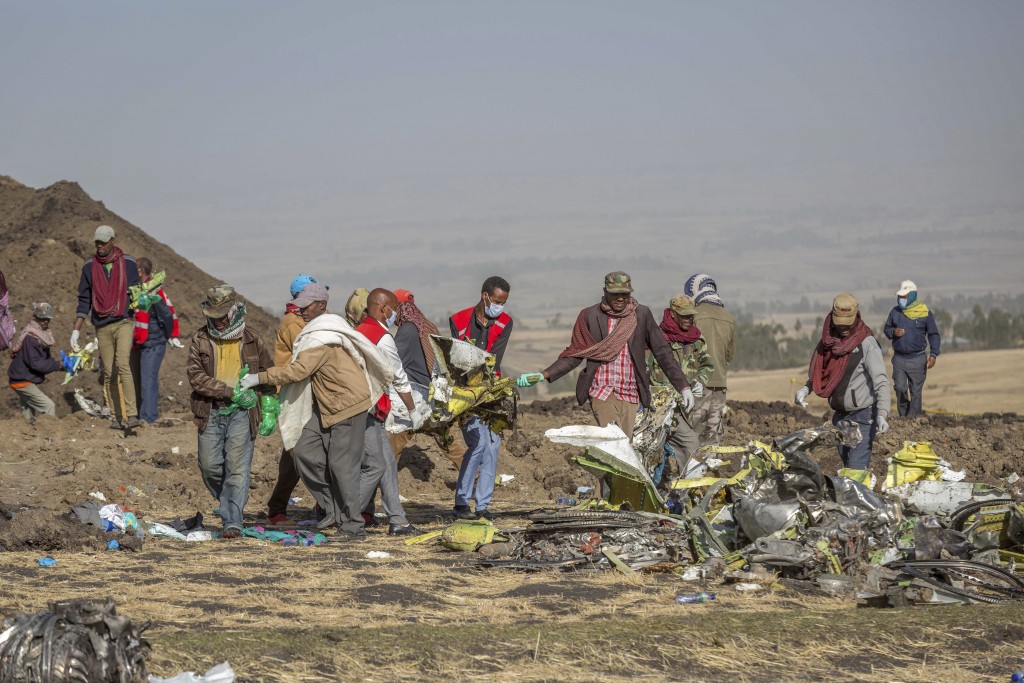 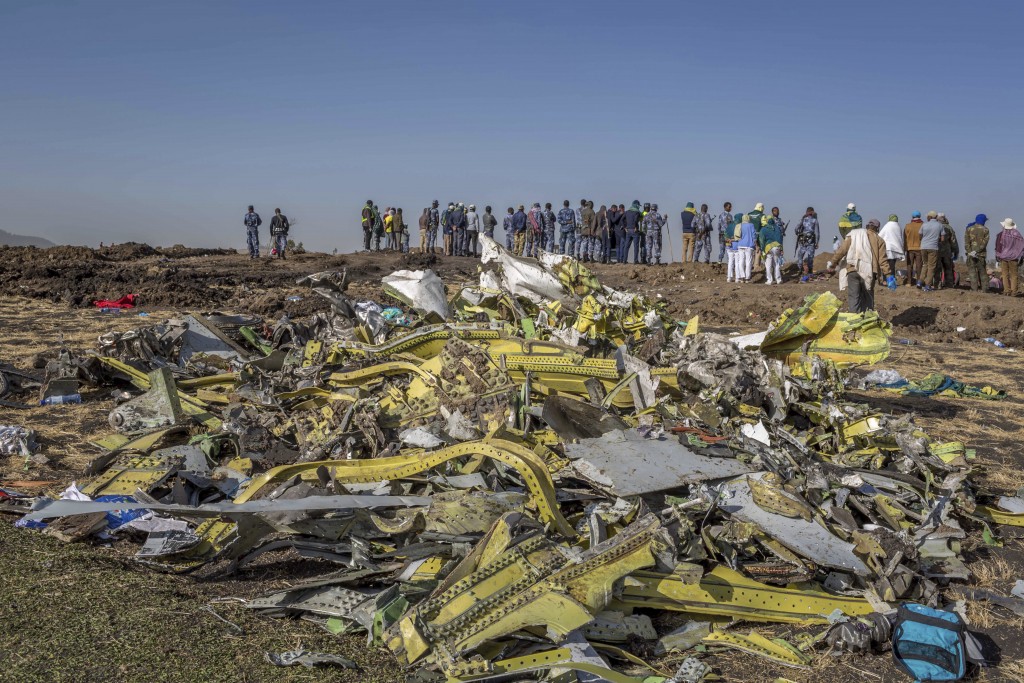 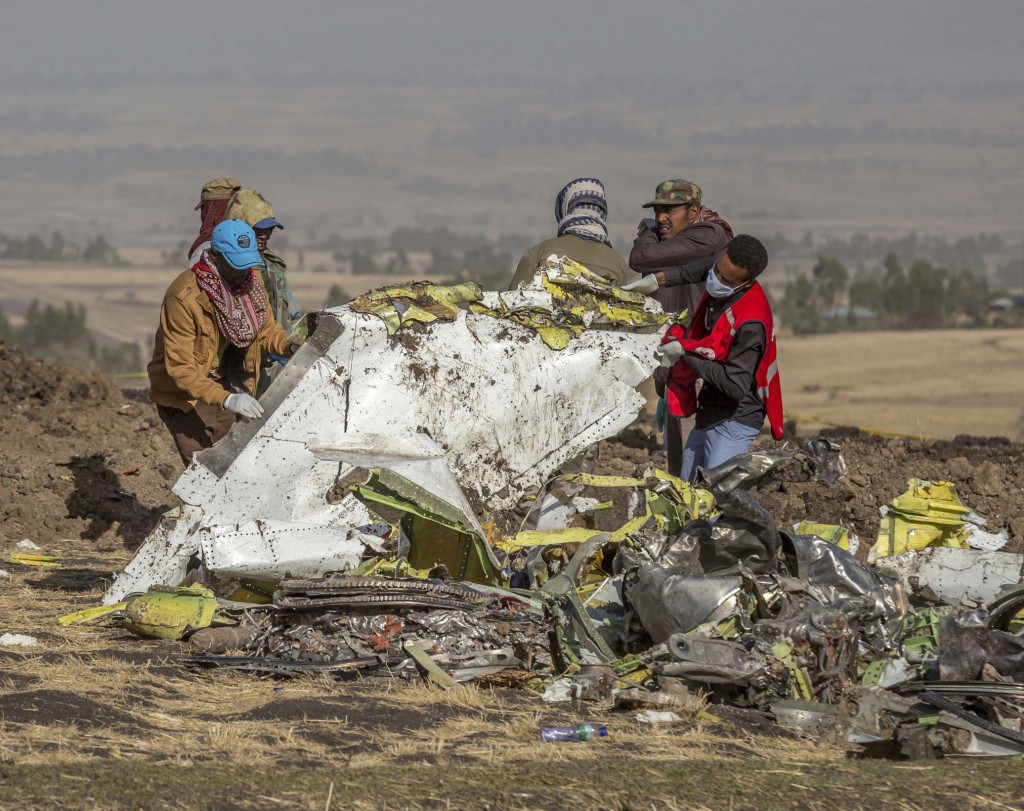 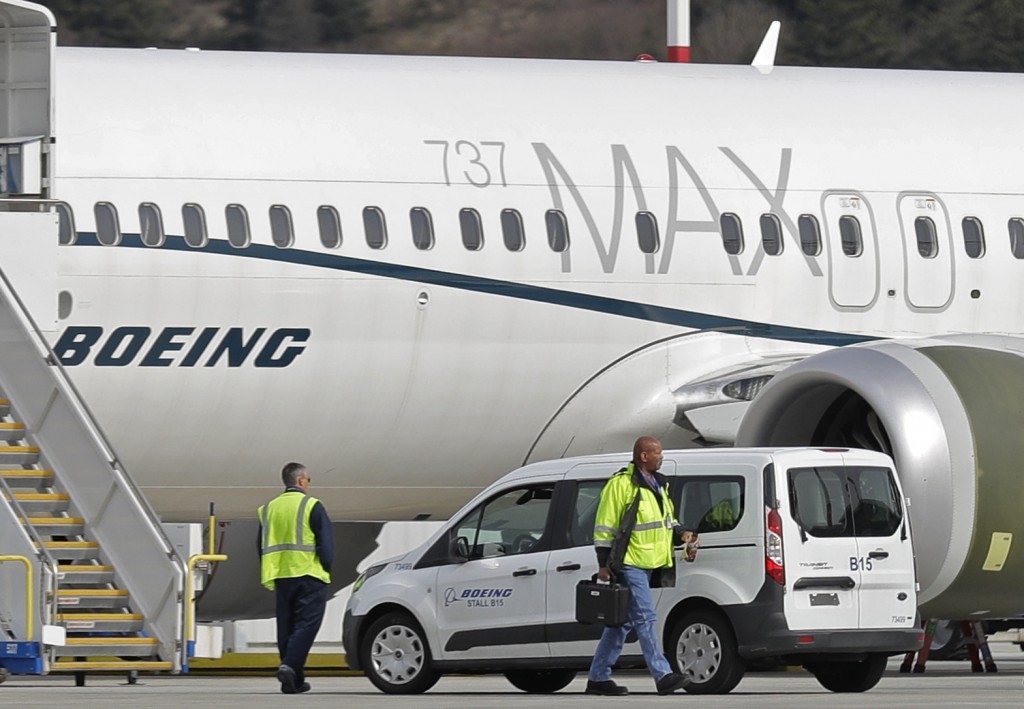 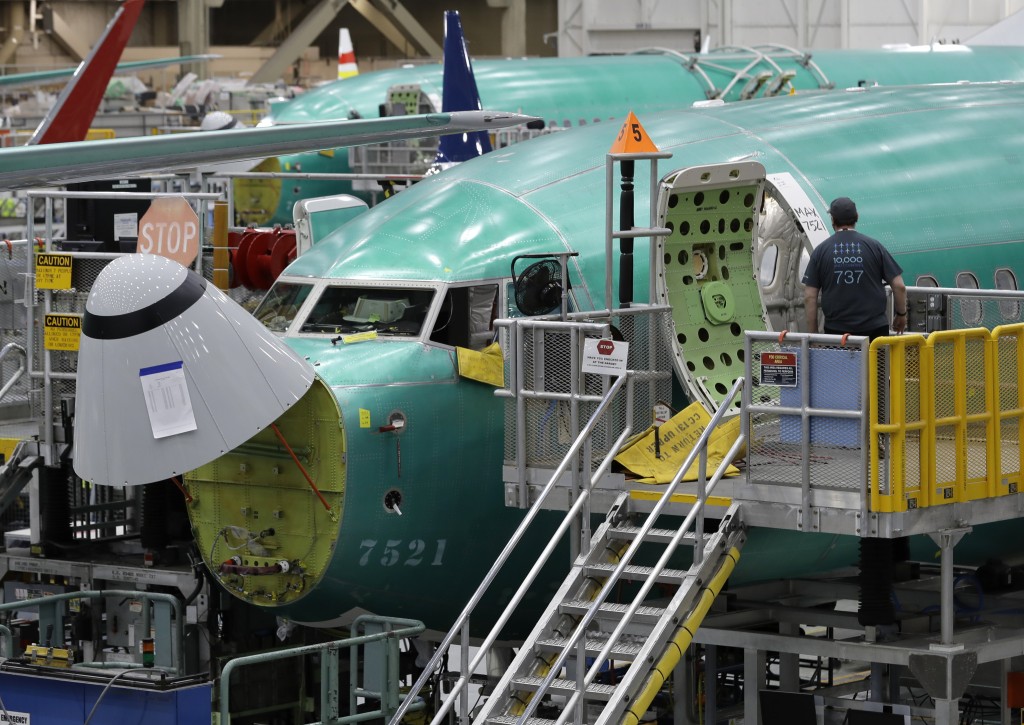 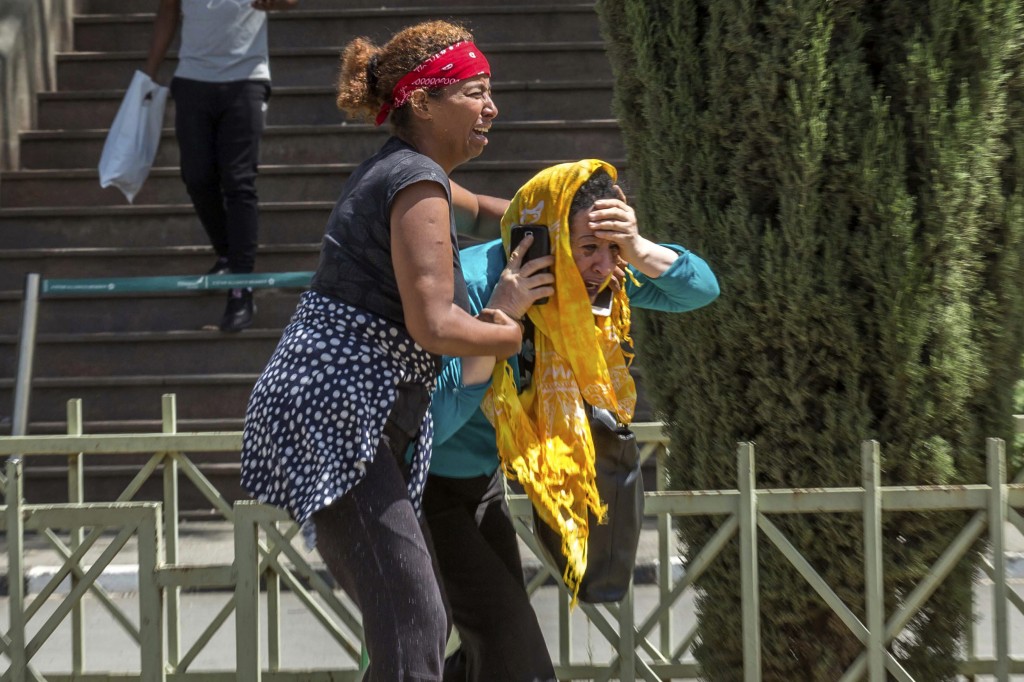 ADDIS ABABA, Ethiopia (AP) — The Latest on the reactions to the preliminary report issued by the Ethiopian government on the March 10 crash of the Ethiopian Airlines Boeing 737 Max 8 jet shortly after takeoff which killed all 157 people on board. (all times local):

The family of a 24-year-old American passenger on the Ethiopian jet has sued Boeing in Chicago. The complaint, which also names Ethiopian Airlines and parts maker Rosemount Aerospace as defendants, is alleging negligence and civil conspiracy among other charges.

The American who was killed in the crash, Samya Stumo, is the great niece of consumer advocate and former presidential candidate Ralph Nader.

"Blinded by its greed, Boeing haphazardly rushed the 737 MAX8 to market" and "actively concealed the nature of the automated system defects," the lawsuit alleges, demonstrating a "conscious disregard for the lives of others."

Boeing is facing several other suits, including seven filed in Chicago earlier by one law firm alone claiming the flight-control system was defective and that Boeing failed to warn airlines about it or fully train pilots.

The Max 8 has been under scrutiny since a Lion Air flight crashed off the coast of Indonesia under similar circumstances in October.

A sister of one of the crash victims of the Ethiopian Airlines flight said her whole family is grieving the death of her brother again amid the preliminary report's release on Thursday. Konjit Shafi, who lost her younger brother Sintayehu Shafi in the crash, told The Associated Press that her family is unsettled by the news reports that are coming out all day.

"Today's preliminary report suggests Boeing could have done better in notifying the problem with the aircraft system early on," she said, surrounded by her family members in Ethiopia's capital, Addis Ababa. "This is causing us a great deal of pain. It is so sad to learn that our loved ones would have been spared if this problem was detected on time."

Konjit said her family has not yet decided to hire a legal team and is waiting for the full report to come out.

"We will do what we got to do when it's the right time for us," she stated. "But we want justice . not a delayed justice but a quick one. I heard the full report may take one year. But that's too long."

The late Sintayehu, a senior mechanic with a Toyota dealership in Ethiopia, was travelling to Kenya to attend a training workshop.

"My late brother was the one who used to drive me back home every day after work," she said tearfully. "Now I have to walk all the way from the main road to my home. And that's become a long walk."

The pilots of a doomed Ethiopian Airlines jet followed all of Boeing's recommended procedures when the plane started to nose dive but still couldn't save it, according to findings from a preliminary report released Thursday by the Ethiopian government. The plane crashed just six minutes after taking off from Addis Ababa, killing all 157 people on board.

The report, based on flight data and cockpit voice recorders on the Boeing 737 Max 8, was not released in full. Boeing declined to comment pending its review of the report on the March 10 crash.

The Max 8 has been under scrutiny since a Lion Air flight crashed off the coast of Indonesia under similar circumstances in October. Thursday's revelations raise questions about repeated assertions by Boeing and U.S. regulators that pilots could regain control in some emergencies by following steps that include turning off an anti-stall system designed specifically for the Max, known by its acronym, MCAS.

Investigators are looking into the role of MCAS, which under some circumstances can automatically lower the plane's nose to prevent an aerodynamic stall. The Max has been grounded worldwide pending a software fix that Boeing is rolling out, which still needs to be approved by the U.S. Federal Aviation Administration and other regulators.

Ethiopian investigators did not specifically mention the MCAS, but recommended that Boeing review "the aircraft flight control system related to the flight controllability." They also recommended that aviation officials verify that issues have been adequately addressed before allowing the planes to fly again.

Boeing is the focus of investigations by the U.S. Justice Department, the Transportation Department's inspector general, and congressional committees. Investigations are also looking at the role of the Federal Aviation Administration in the U.S., which certified the Max in 2017, declined to ground it after the first deadly crash in October. The agency was also reluctant to ground the planes after the Ethiopian Airlines crash and was among the last agencies to do so.

The FAA, which must certify the 737 Max is safe before it can go back into the air, said in a statement that the investigation is still in its early stages.

"As we learn more about the accident and findings become available, we will take appropriate action," the agency said.

The statement did not say if the FAA would review the Max's flight control system as recommended by Ethiopian investigators, and FAA spokesman Greg Martin would not comment beyond the statement. Boeing is working on improvements to the MCAS software that would make it less aggressive in pointing the nose down and easier for pilots to disable. The FAA has said it will review the software before allowing the Max to fly again.

The agency said Monday that it anticipates Boeing's final software improvements for 737 Max airliners "in the coming weeks."

But it wasn't clear whether the Ethiopians are seeking just that or a broader update in the Max's flight controls.

What also isn't clear is whether the Ethiopian pilots followed Boeing's recommendations to the letter in dealing with the system repeatedly pointing the nose down.

The pilots initially followed Boeing's emergency steps by disconnecting the MCAS system, but for an unknown reason, they turned the system back on, an official familiar with the crash investigation told The Associated Press on Wednesday. The official spoke on condition of anonymity because at the time, Ethiopian investigators had not released their preliminary report. Boeing's procedures instruct pilots to leave the MCAS system disconnected and continue flying manually for the rest of the flight.

Ethiopian investigators did not address that issue at its press conference, saying only that the pilots had done what they were supposed to.

"The crew performed all the procedures repeatedly provided by the manufacturer but was not able to control the aircraft," said Minister of Transport Dagmawit Moges.

However, Moges told The New York Times after the press conference that the pilots turned MCAS on and off, but she couldn't say how many times. That will be addressed in the final report, she said.

In a statement Thursday, Ethiopian Airlines said its pilots followed Boeing instructions. "Despite their hard work and full compliance with the emergency procedures, it was very unfortunate that they could not recover the airplane from the persistence of nose diving," the airline said.

The Ethiopian officials did not say whether the MCAS system activated because of a faulty sensor that measures the plane's angle relative to the wind. One of the sensors, called Angle of Attack, malfunctioned in the Lion Air crash, triggering the MCAS system.

David Hasse, an aviation analyst and editor of industry publication airliners.de in Berlin, says it is significant that the report found that the pilots followed the proper procedures, because that links the case more closely to the Lion Air crash.

"What is special about this case is that two crashes seem to have a very, very similar reason. This is something that is very rare in aviation. The question is whether the Boeing 737 Max should have been grounded after the Lion Air crash and before the Ethiopian Airlines crash," said Hasse.

He noted that crash reports are not meant to assign legal blame and that it is too soon to know what the legal implications might be for Boeing, but it clearly raises the pressure on the company.

"If pilots sit there and follow the rules that have been given to them by the manufacturer, then they should be able to rely on the fact that they are correct," Hasse said.

But John Hansman, an aeronautics professor at the Massachusetts Institute of Technology, said turning the MCAS system back on after disabling it would be a logical step for the pilots to take. If pilots find that the plane is repeatedly pointing the nose down, Boeing procedures say they should flip two switches to the left of their knees that would cut electrical power to motors that control a horizontal stabilizer on the tail. MCAS points the nose down by moving the stabilizer with the motors. After disabling the stabilizer, the pilots would have had to control it by turning a wheel manually to point the nose up.

Hansman said it's key to know if the angle of attack sensor malfunctioned, and how long after takeoff it took for the pilots to diagnose the problem and shut off MCAS. The later they shut it off, the less time they had to recover, he said. He also would like to know at what point the MCAS system was turned back on and if it was too late to prevent the crash.