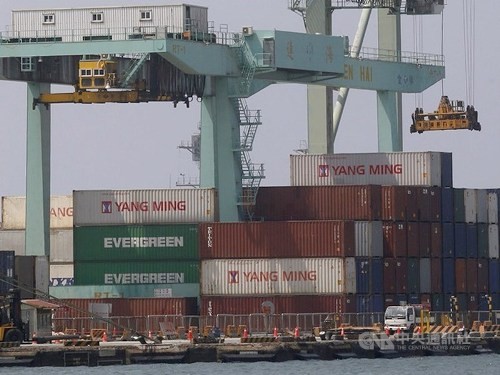 Taiwan's exports accounted for 1.7 percent of the entire globe's exports in 2018, making the nation the 18th- largest exporter, the same place it held the previous year, according to global commodity statistics released by the World Trade Organization (WTO) Tuesday.

Based on WTO data, China was the biggest source of exports last year, accounting for 12.8 percent, or US$2.49 trillion.

The second-largest global exporter was the United States, with US$1.66 trillion in exported goods, accounting for 8.5 percent of the world total.

In third place was Germany, with 8 percent (US$1.56 trillion) and fourth was Japan, with 3.8 percent of global exports.

In terms of global imports, the total was estimated at US$19.9 trillion, representing a 10.1 percent increase compared to 2017, the data shows.

The top five importers, in order, were the U.S., China, Germany, Japan and the United Kingdom.

Commenting on the outlook for merchandise trade in 2019 and 2020, WTO economists said they expect the growth to fall to 2.6 percent this year -- down from 3.0 percent in 2018. The trade growth could then rebound to 3.0 percent in 2020, dependent, however, on an easing of trade tension between China and the U.S.