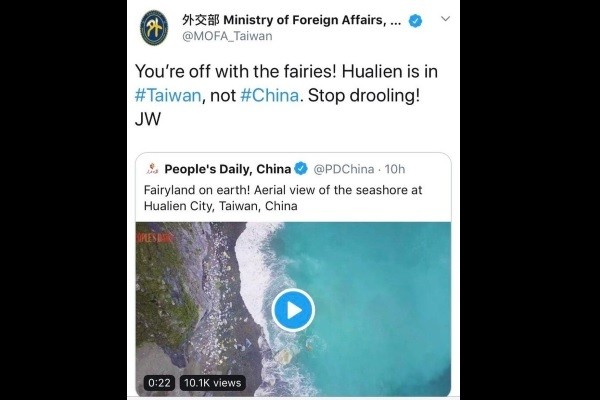 At 1:15 p.m. on Tuesday afternoon, the People's Daily posted a video of the scenic coastline in Hualien County which read "Fairyland on earth! Aerial view of the seashore at Hualien City, Taiwan, China."

Taiwanese and foreign netizens alike soon took note that the tweet was erroneously labeled as "Hualien City, Taiwan, China." Not only was the footage actually of Hualien County, rather than Hualien City, but also Taiwan is not factually a part of Communist China.

Many netizens left sarcastic comments below the attempt at disinformation:

"China is a really beautiful country. Here's a magnificent picture of the statue of liberty in NY, China, celebrating the freedom that people enjoy in Tibet and Xinjiang."

"The good folk on the Chinese mainland can't see this. Oh the irony!"

At 10:40 p.m. that evening, MOFA on its Twitter page parodied the People's Daily tweet by writing "You're off with the fairies! Hualien is in #Taiwan, not #China. Stop drooling! JW" The initials JW, likely refer to the current MOFA minister Joseph Wu (吳釗燮).

The tweet soon received 2,300 likes, a far cry from the 601 likes the original Chinese post received. Many netizens sent messages of encouragement in response to the bold tweet:

"Well said. Let’s have more of this!"

You’re off with the fairies! Hualien is in #Taiwan, not #China. Stop drooling! JW https://t.co/rFfth0schO