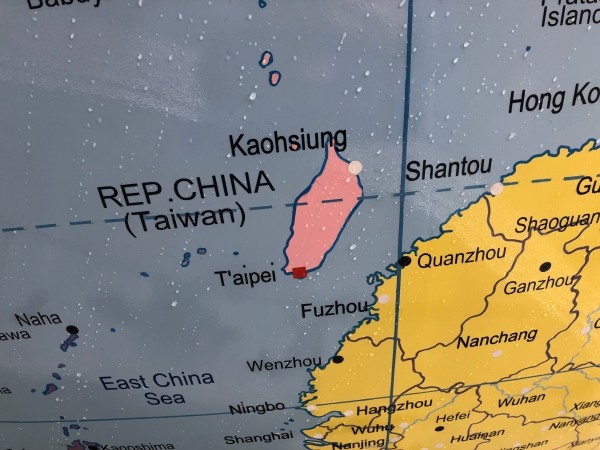 TAIPEI (Taiwan News) -- The London School of Economics (LSE) decided to kowtow to Chinese students and change the color of Taiwan to match that of China on a large sculpture on its campus, despite opposition to the alteration from Taiwanese students.

On March 26, LSE unveiled a large outdoor sculpture of a political globe by Turner Prize-winning artist Mark Wallinger titled "The World Turned Upside Down." The concept of the massive sculpture, which is 4 meters in diameter, is to invert the map of the world to give a perspective of the earth from the southern hemisphere. Chinese students then lodged a protest with LSE for the use of separate colors for Taiwan and China, as well as the highlighting of Lhasa and demarcation of the border with India. The school then held a meeting over the matter this morning and decided to change the color of Taiwan to yellow, to match that of China, reported CNA.

In response, a group of Taiwanese students at LSE issued a joint statement which said, "As a sovereign and independent country, the Republic of China (Taiwan) has a free and democratic political system and abides by the separation of powers and the rule of law. We have our own diplomatic corps, military, and domestic political system, and the Chinese government has no right to interfere in this matter."

Huang Lee-an (黃立安), a Taiwanese student at the university, told CNA that after the school convened a meeting with student representatives to discuss the matter, it decided to change Taiwan's color from pink to yellow, to match that of China. The student said they also had the red dot labeled Taipei, changed to black, demoting it from a capital city of a country, to a mere city in a province of China. The student said that "REP. of CHINA" was also unceremoniously removed from the artist's work.

Wallinger stated that he based the boundaries on the UN's definitions, but intentionally inverted the map to show things from a different vantage point: "The UN is the authority as to the names and borders. This is the world, as we know it from a different viewpoint. Familiar, strange, and subject to change.”

Huang told CNA that during the meeting, he mentioned UN Resolution 2758, which does not substantively deal with the issue of Taiwan's sovereignty. He also repeatedly explained Taiwan's current political situation and mentioned that in many UN publications, information about Taiwan is often left blank or printed in gray. When Taiwan's Ministry of Foreign Affairs was informed of LSE's resolution, it immediately sent a letter of protest via its representative office in the UK.

To add insult to injury, LSE then posted a hypocritical notice next to the sculpture stating that it was committed to creating an "inclusive" environment "for all" while ensuring that members of the community are treated with "equal dignity and respect at all times," with the apparent exception of Taiwanese students and the nation of Taiwan.

On the page introducing the artwork, LSE boasts that Wallinger's piece "reflects the spirit of progressive enquiry that has characterised the School since its inception."

When Tsai Ing Wen (蔡英文) was elected President of Taiwan in 2016, LSE was quick to mention Tsai (PhD in Law 1984) as the 37th LSE alumni to serve as "either President or Prime Minister of a nation."