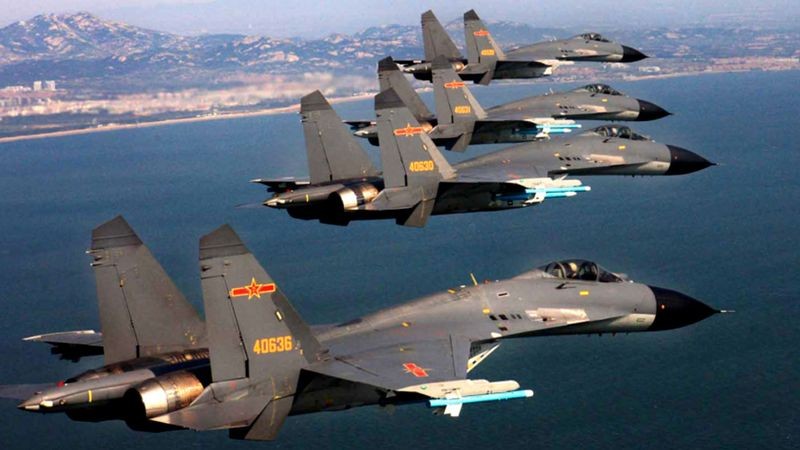 TAIPEI (Taiwan News) -- The same day Chinese warplanes crossed over the median line on the Taiwan Strait, the Chinese state-run mouthpieces the Global Times published an editorial stating that if the U.S. and Taiwan continue to "provoke China," the People's Liberation Army (PLA) will probably put the "airspace above Taiwan Island within its patrol range."

On Sunday evening, the Global Times published an editorial titled "Mainland [Chinese] Military Aircraft Fly Over 'Taiwan Strait Median Line.'" In the article, the author asserted that the flight over the median line showed that the PLA was issuing a stern warning to Taiwan.

The editorial claimed that since the adoption of the Taiwan Travel Act by the U.S., the "interaction between the U.S. and Taiwan has increasingly been slicing sausages to add [bargaining] chips. In particular, U.S. warships have crossed the Taiwan Strait three times this year. Last week, in addition to destroyers, a Coast Guard cutter passed through at the same time, constantly putting pressure on the mainland [China]. It is impossible for the mainland [China] not to respond." The use of the words "slicing sausages" could be a reference to salami tactics, the process of dividing and conquering opposition through threats and alliances.

According to the editorial, China has never acknowledged the "Taiwan Strait Median Line," but the Navy and Air Force of both sides have a tacit understanding of not crossing the median line in the past. "However, this tacit understanding is part of the current situation in the Taiwan Strait, the prerequisite for maintaining it is that the political basis of cross-strait relations remains unchanged. And that Taiwan does not have contacts and interactions with external forces beyond previous levels," stated the editorial.

The article then takes a menacing turn by threatening that if the U.S. and Taiwan continue to "provoke China, the PLA may also delimit the airspace on Taiwan Island into its patrol range and declare national sovereignty over Taiwan in a more direct way."

The editorial goes on to assert that "The mainland [Chinese] Navy and Air Force will probably completely ignore the so-called median line and use the entire Taiwan Strait as an operating area for the PLA. Furthermore, it cannot be ruled out that the PLA will take further action in accordance with the changing situation."