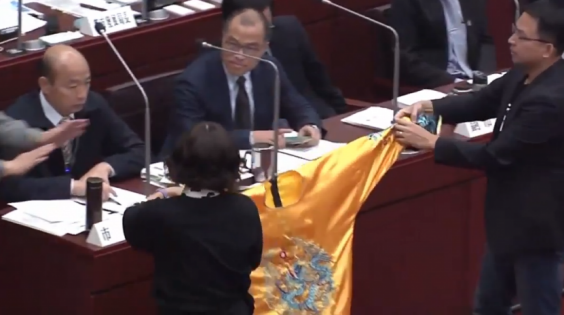 During a meeting of the Kaohsiung City Council this morning, the DPP launched a protest before he took the podium. DPP council members shouted slogans and held up placards which read: "Hong Kong today, Taiwan tomorrow," Support the Kuomintang, and Taiwan will become Hong Kong," and "1992 Consensus gas chamber." DPP council members then stood in front of Han and shouted "Reject one country, two systems, economic revitalization starts from the ground up," reported Now News.

DPP councilman Lin Chih Hung (林智鴻) criticized Han's meeting with top liaison officers of Chinese Communist Party (CCP) for Hong Kong and Macau behind closed doors as a "black-box operation." Lin said no one knows who Han met with in private and what he talked about.

Lin then asked, "Were you helping the China Liaison Office? Are you running for president?" reported China Times. Lin said that if Han wants to run for president, he should be a generous man.

Lin said that if Han dared to speak, he would be admired as a man, but for now, he keeps squirming and waits for the time when he will don the yellow (imperial) robe. Lin then stood in front of Han and tried to present him with an imperial Qing Dynasty dragon robe.

Han then shook his head and raised his hand to wave off Lin's "gift." Lin then said, the citizens like the mayor who promised "one thousand pieces of gold," "can you answer the question if you are running in 2020?"

Han responded by saying "I am not currently considering [entering] the 2020 elections," reported China Times. Lin then asked, "If the KMT calls on you to take part in the elections, would you take part?" Han replied by saying, "The party chairman has not issued this order either." Lin reacted by saying that Han is always noncommittal and the chances of him being called up are "very high."

When Lin asked if Han had explicitly expressed his rejection of the "one country, two systems" framework when at the China Liaison Office, Han said, "I don't care if you believe it or not, all of the members of the delegation can testify." They would say, "He went to make friends, talk about business, and introduce Kaohsiung, " said Han.