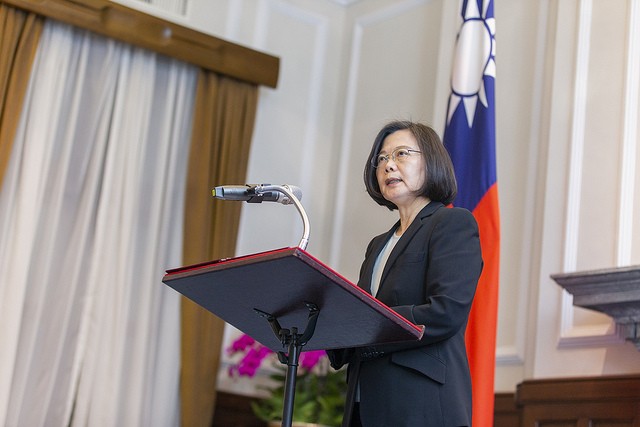 Through a Facebook post published at noon, Tsai said she has ordered the military to take strong and immediate action to fend off any aircraft intentionally crossing the line.

The military immediately deployed several fighters jets to intercept the Chinese war planes and issue a radio warning. The standoff lasted for 12 minutes before PLAAF’s aircraft retreated to the west side of the Strait.

Hosting a military ceremony on Monday, Tsai protested PLAAF’s provocative action and admonished Beijing. She called on the country not to intentionally provoke Taiwan, create trouble, nor challenge the cross-strait status quo.

“As a president, I will fight together with every warrior until the end,” Tsai said. She also pledged to protect national security and sovereignty. “[We] will not yield an inch of the nation’s territory.”

Chen Ming-tong (陳明通), minister of the Mainland Affairs Council, the top government agency handling cross-strait affairs, said Monday the incursion of Chinese aircraft was “expected.” He warned that similar military maneuvers are likely to occur on a regular basis in the future as Beijing continues to try and absorb Taiwan.

Chen called for the international community to take heed of the PLA. He added that Beijing should be redefined as a destroyer of the status quo and a provocateur.

China does not solely stage its military activities in the Taiwan Strait. On Saturday, seven PLAAF aircraft, including four H-6K long-range bombers, crossed through the Miyako Strait, near the East China Sea. Japan’s Air Self Defense Force scrambled fighter jets to intercept and monitor the Chinese aircraft.