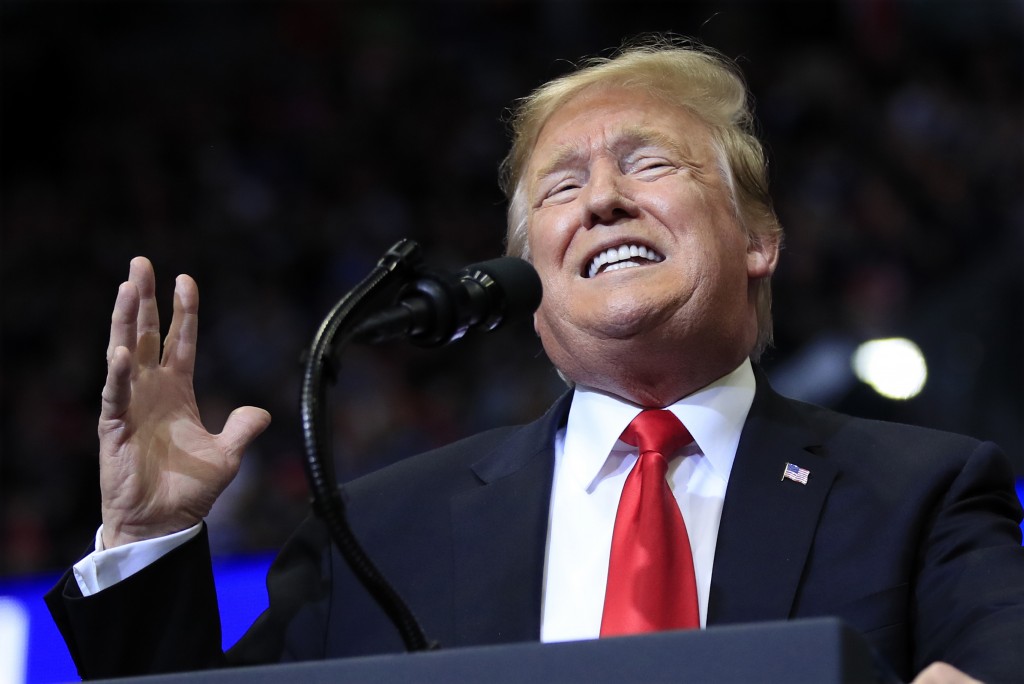 WASHINGTON (AP) — President Donald Trump's decision to revive the fight over the Affordable Care Act has stirred a political and policy debate among Republicans on how best to approach the divisive issue heading into the 2020 election.

Failing to repeal and replace the ACA, otherwise known as Obamacare, is one of the biggest shortcomings of the president's first term. It left Republicans with a broken campaign promise, dismal approval ratings and a narrative they haven't been able to shake — that they don't support protecting those with pre-existing medical conditions from high-cost care. In some races, it cost Republican seats last fall, flipping House control to Democrats.

For Trump, the reset he wants is clear. "The Republican Party will soon be known as the party of health care," he said on Capitol Hill . "You watch!"

But among Republican senators, there's reluctance to embrace Trump's new priority. Usually tight-lipped Senate Majority Leader Mitch McConnell, who was given little advance notice of the president's new push, spoke volumes when asked about it.

"I look forward to seeing what the president is proposing," McConnell told Politico.

And in the House, it's a mixed bag. Minority Leader Kevin McCarthy initially panned Trump's move, questioning the timing that collided with Trump's bounce from the end of special counsel Robert Mueller's probe of Russian interference in the 2016 election. But the GOP leader does see value in kick-starting a health care debate, said a person granted anonymity to discuss the situation. House Republicans continue to be asked about it back home and a new GOP health care bill could improve their standing with voters, the person said.

What's unclear is whether a Trump-Care bill will emerge from the White House or Capitol Hill to replace the Affordable Care Act or if the president's push for a policy outcome fades to little more than a topic for the campaign trail.

Trump discussed health care at length during a rally in Michigan Thursday and again during an appearance in Florida Friday.

"We are going to have a plan that's so much better than Obamacare," the president promised after touring an aging dike in South Florida.

For Trump, returning to health care shows his commitment to a 2016 campaign pledge and his desire to frame the 2020 debate on his terms.

Stung by the Democratic gains in November and sparked by another ACA legal challenge that could make its way to the Supreme Court, the president dug into the issue this past week, deciding to fight. He feels that it is an important battle to take on, said two people familiar with White House thinking who were not authorized to speak publicly.

The president has been actively engaged in conversations about health care, dialing up lawmakers in the House and Senate, and the White House is expected to lay out further details on his goals in the coming days.

"We are working very hard on that," said Trump as he was heading out to the Michigan rally, singling out Republican senators John Barrasso, Rick Scott and Bill Cassidy among those involved.

"They are going to work together to come up with something that's really spectacular," the president said.

But in truth, there is no grand Republican plan on Capitol Hill to replace Obamacare.

The day after Trump dropped the new priority during a private Senate GOP lunch, a top ally, Sen. Lindsey Graham, R-S.C., convened an evening meeting of senators to discuss options, according to those familiar with the talks.

Graham had helped spark the idea with Trump during a golf outing at Mar-a-Lago. The group he assembled back on Capitol Hill included two former governors well versed in health care policy — Sen. Mitt Romney of Utah, whose Romney-care in Massachusetts was a precursor to Obamacare, and Sen. Rick Scott of Florida, a former health care executive.

But McConnell has made it clear he would rather see Republicans spend their time attacking the Democratic plans to expand existing health care programs, namely the Medicare for All plans embraced by some of the Democrats running to unseat Trump. He sees it as their best option for reversing public opinion heading toward 2020 when he, too, faces re-election. McConnell derides the high cost of a government-run system as "Medicare for None."

The thinking among McConnell and other leading Republicans is that it's best to avoid another messy legislative battle. Republicans are loath to repeat the undertaking that consumed much of 2017. At that time, Republicans could never agree on a new health care plan and the months-long exercise ended in failure when John McCain joined others in rejecting one last-ditch effort, dooming the years-long campaign to repeal and replace Obamacare.

They would rather simply wait out the White House with an expectation that no actual legislation emerges, according to those familiar with the GOP thinking.

House Republicans, though, face a different calculus. They lost dozens of seats last fall in part because Democrats successfully attacked them over the GOP proposals to replace Obamacare. Americans have warmed to the 2010 health care law and, in particular, its provision that prevents insurers from charging more to patients pre-existing conditions.

McCarthy wants the majority back, the person said. Even though he questioned Trump's sudden shift to health care, it has promise. The day after Trump announced his health care push, the GOP leader convened the top House Republicans from various committees to dig into the issue.

But Republicans lost their chance to revise Obamacare when they controlled both chambers in Congress. Now, any bill will need Democratic backing to clear the House with Speaker Nancy Pelosi's majority.

At most, lawmakers envision a modest package of health care bills that could lower prescription drug prices and other reforms that have wide bipartisan support.

That may or may not be enough for Trump.

And if not, he can continue advocating for more on the campaign trail.

At the rally in Michigan, he vowed, "It's going to be far better than Obamacare."