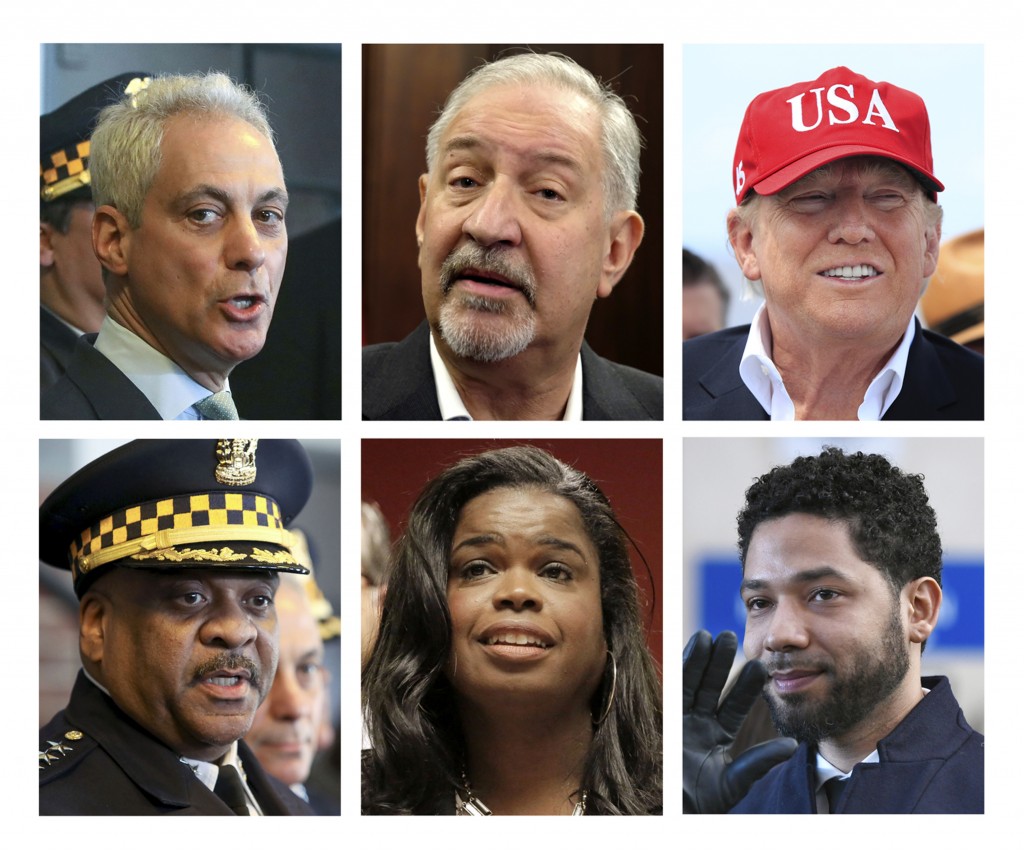 CHICAGO (AP) — Jussie Smollett, a successful but not A-list actor, burst into the world's consciousness in January after he reported being the victim of a racist and anti-gay attack. In the two months since, a number of figures in Chicago and beyond have gained international attention and emerged as supporting characters in the saga. A look at those involved:

Actor and musician Jussie Smollett went from child star to one of the few actors to play a black gay character on primetime TV on Fox's "Empire." His name-recognition skyrocketed when he made a report to Chicago police that he was the victim of a racist and homophobic attack in late January. Weeks later, his celebrity turned to notoriety when he was indicted, accused by police of staging the attack because he was unhappy with his pay on "Empire" and was looking to promote his career. On Tuesday, tables turned again for the actor when prosecutors dropped the charges. Afterward, Smollett stood in front of a media crush , thanking his family and supporters.

President Donald Trump increased attention on the case when, two days after Smollett reported the attack, he told reporters at the White House that he saw a story about Smollett. "It doesn't get worse, as far as I'm concerned," Trump said. Smollett said his attackers yelled, "This is MAGA country," a reference to Trump's "Make America Great Again" campaign slogan. Two days after prosecutors drop charges against Smollett the president tweeted that the FBI and Department of Justice will "review the outrageous Jussie Smollett case" and called the case "an embarrassment to our Nation!"

Mayor Rahm Emanuel jumped to support his city after Smollett was first charged, saying the accusations against the actor "will never trump Chicago's collective spirit." When charges were dropped, a visibly angry Emanuel appeared at a news conference and called the move by prosecutors "a whitewash of justice." He said Chicago "saw its reputation dragged through the mud." Emanuel's administration on Thursday sent Smollett a letter, ordering him to pay $130,000 to cover the cost of the investigation.

Chicago Police Superintendent Eddie Johnson was chosen to lead the department after his predecessor was fired when video was released showing a white police officer fatally shoot unarmed black teenager Laquan McDonald 16 times. Johnson said he was angry and offended that another black man would exploit racial divisions for his own gain. He called Smollett's case a "scar that Chicago didn't earn and certainly didn't deserve" and said the actor should apologize. When charges were dropped, Johnson said Smollett still owes the city an apology — and that he should have been willing to prove his innocence.

Cook County State's Attorney Kim Foxx removed herself from the Smollett case before he was charged, saying she had discussed the case with a Smollett family member. The case was handed to First Assistant State's Attorney Joseph Magats. Foxx defended the decision by her staff to drop charges, saying the matter was handled properly. She pointed to Smollett forfeiting his $10,000 bond and doing community service.

Smollett turned to celebrity defense attorney Mark Geragos, whose clients have included Michael Jackson and Colin Kaepernick, when he was charged. Geragos called the 16-count indictment that Smollett faced "prosecutorial overkill." When charges were dropped, Smollett walked out of a Cook County courtroom with attorney Patricia Brown Holmes, who told reporters that her client "was a victim who was vilified and made to appear as a perpetrator." Holmes is known locally for being special prosecutor in the trial of three Chicago police officers who were acquitted of lying to protect their colleague who shot McDonald.

Abimbola "Abel" and Olabinjo "Ola" Osundairo told police Smollett hired and paid them $3,500 to help stage an attack on himself that included shouting slurs, dousing the actor with a chemical and draping a noose around his neck. The brothers testified before a grand jury and later said they regretted their involvement . After charges were dropped, the brother's attorney, Gloria Schmidt, said they "were fully prepared to testify in any criminal proceeding" in the Smollett case.

Check out the AP's complete coverage of the Jussie Smollett case.