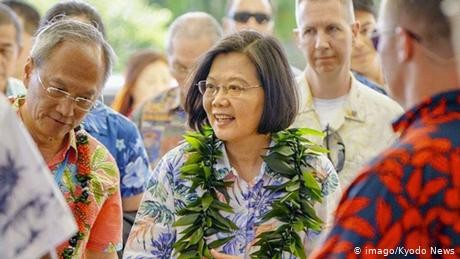 During a visit to the US Pacific island state of Hawaii on Wednesday, Taiwanese President Tsai Ing-wen made a request to buy new US military equipment, including M-1 Abrams tanks and F-16 fighter jets. Tsai said the equipment would be for "self defense" and "deterrence."

Tsai's Hawaii stopover concluded a week-long tour to Palau, Nauru and the Marshall Islands, which are a few of Taiwan's 17 diplomatic allies around the world.

Although Washington and Taipei severed diplomatic ties 40 years ago, the two remain allies.

China's Foreign Ministry spokesman Geng Shuang said Thursday that the US should stop arms sales to Taiwan, or else risk "serious damage" to US-China relations.

Although Beijing has never ruled out taking the self-governing island by force, Chinese President Xi Jinping ramped up rhetoric earlier this year, delivering a speech in which he called for "peaceful reunification" with Taiwan. He also said that China would use "all necessary means" to achieve this.

Last year, Taiwan bought some $330 million in military aircraft parts from the US.

Since Tsai's election in 2016, cross-strait relations have become tenser. Her party, the Democratic Progressive Party (DPP), refused China's demand to explicitly state that Taiwan is part of its territory.

Bonnie Glaser, director of the China Power Project at the Center for Strategic and International Studies (CSIS) in Washington, said the tour was a way for President Tsai to shore up support in the region.

"The Chinese have been poaching many of Taiwan's allies," she said. "I think there are several that are vulnerable to switching sides," Glaser told DW.

Since 2016, five countries have withdrawn support for Taiwan in favor of Beijing's "One China" policy, which claims the self-governing island is part of its territory.

"There is particular concern because there is an election coming up in the Solomon Islands in a couple of weeks," said Glaser, adding there was concern that the Taipei ally might drop its diplomatic support. Tsai didn't pay a visit to the Solomon Islands during her tour.

Tsai's presence in Honolulu only has symbolic significance because Taiwanese leaders are not able to meet higher-level US politicians due to the unofficial nature of their visits. But there are sometimes "private dimensions" to these stopovers, Glaser said.

"I think there's an opportunity for her to have a phone call with high-level officials, and they're usually not made public," said Glaser, adding that it would also be possible for Tsai to have clandestine meetings with officials at the US Indo-Pacific command.

According to Richard Bush, a senior fellow at Brooking Institute's East Asia center, Taiwanese leaders have been granted more freedom from Washington while on US stopovers in recent years.

"It's an expression of friendship, but I think there's also belief that if you do it gradually, it's less provocative," Bush told DW. Bush labelled the trip a "defensive operation" amid Chinese dominance in the region.

In response to the Hawaii visit, the Chinese Foreign Ministry accused Washington of undermining the "One China" policy. A spokesman last week said Beijing firmly opposed the arrangement of such "stopovers."

Although the US formally recognizes China's sovereignty over Taiwan, Bush said Taipei will remain a strategic military ally for Washington in East Asia.

"The State Department wants to improve the conduct of relations [with Taiwan] but to do so within the parameters of past policy and also maintain a certain balance with its relationship with China," he said.

This requires a diplomatic balancing act in Washington, as China continues to put military and social pressure on Taiwan.

"The growing threat that China is posing towards Taiwan is not just a military threat. It is interference in Taiwan's politics and society. It is economic carrots and sticks, sowing divisions within Taiwan, including cyber intrusions and manipulation of social media," said Glaser.

The analyst also said that US President Donald Trump would not use Taiwan as a bargaining chip in dealing with China.

"Very early in his tenure, he did say that he might not reaffirm the One China policy. But he learned very quickly the risk of not doing that," said Glaser.