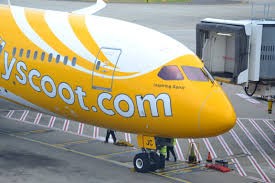 Singapore-based budget carrier Scoot said Thursday that it will add flights from June 1 to its two routes connecting Kaohsiung in southern Taiwan with Singapore and Osaka.

The airline will operate three more round-trip flights on the two routes, using the Airbus A320 model, to offer daily services to both destinations.

"Our market in southern Taiwan continues to grow," said Scoot General Manager Victor Lee (李育修), adding that the average ridership on the two routes is about 85 percent.

Lee expressed hope that the new routes, particularly the one to Singapore, will make the city state more accessible for people from southern Taiwan, who can transit from there to other long-haul destinations the airline serves, including Berlin and Athens.

The increased services from this summer will bring the total number of Scoot flights in Taiwan to 56 round-trip flights per week, connecting Taipei and Kaohsiung with Tokyo, Singapore, Sapporo, Seoul and Osaka.