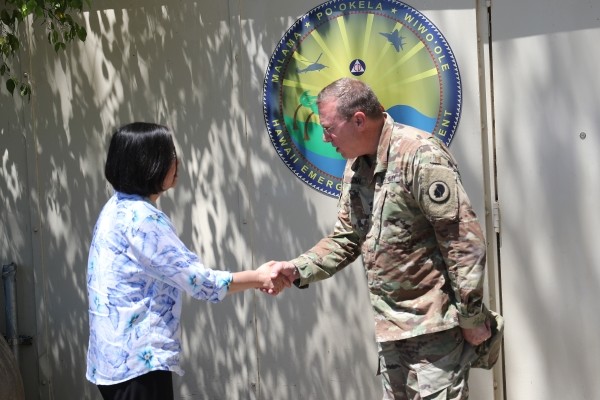 TAIPEI (Taiwan News) -- For the first time during a transit through the U.S., Taiwan President Tsai Ing-wen met with a U.S. general on Wednesday (March 27) in Hawaii, reported Liberty Times.

At noon (local time) on Wednesday, Tsai was accompanied by Hawaii National Guard Adjutant General, Maj Gen. Arthur Logan as she toured the Hawaii Emergency Management Agency (Hi-EMA) and the Hawaii National Guard’s disaster prevention center to learn about homeland security and other issues. This marks the first time Tsai has met with a U.S. general during a stopover in the country.

After Taiwanese legislators met with Logan during an earlier visit to the state, China strongly condemned the meeting. This time, Logan personally received President Tsai and did not shy away from interviews with the media, indicating a shift in U.S. policy toward deepening cooperation between the U.S. and Taiwan at the security level. The agency Tsai visited, Hi-EMA, is affiliated with the State of Hawaii, Department of Defense, which also includes the National Guard and Office of Homeland Security. The department is mainly responsible for disaster response in Hawaii.

During Tsai's visit, Logan talked about the possibility of making several trips to Taiwan for exchanges. He also mentioned that the two sides could cooperate more closely in the future.