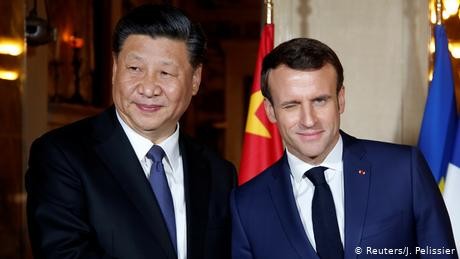 The French government has billed the encounter, on the third and last day of Xi's state visit to France, as a "high-level meeting on the challenges of multilateralism."

Both Xi and Macron talked up the virtues of multilateralism at a state dinner Monday evening. Macron said that he hoped to build a "new global governance" with China.

"This is an important gesture that we are making now. It is testament to your deep attachment to China's cooperation with Europe... and my desire to build a strong Europe," he told Xi.

A prosperous Europe corresponded with China's "vision for a multipolar world," Xi said, adding that "China will always back European integration."

Macron has been a vocal opponent of US President Donald Trump's unilateral approach to global affairs. Xi, unlike Trump, has remained a supporter of multilateral action against climate change and the agreement on Iran's nuclear program.

Tuesday's meeting, however, is also likely to address the thornier subject of trade with China, where Juncker has said the relationship is "imbalanced."

China and France announced a dozen business deals on Monday including agreements on nuclear power, cultural exchanges and clean energy on Monday, while Beijing also committed to buy 290 Airbus A320s and 10 A350 airliners from Europe's giant aircraft manufacturer Airbus.

The order, originally for 184 A320s for 13 Chinese airlines, was first announced during Macron's state visit to China in January 2018.

All of the deals, including one on French exports to China of frozen chicken, amount to a total of some $40 billion.

China and Europe should have an economic and trade relationship "built on a fair and balanced framework," Macron said.

Earlier on his trip, Xi visited Italy, which became the first G7 state to sign up to China's vast "New Silk Road" infrastructure project that has sparked unease in the US and the European Union.

Macron announced that France and China will cooperate on a number of investment projects in some of the countries involved in the initiative, a massive undertaking to link Asia to Europe.

Italy's participation comes despite misgivings over the huge venture by other European nations wary of China's growing influence.

Despite a number of sources of friction, France wants to engage China as a closer partner as Washington becomes more isolationist under Trump's "America First" policy.

A full China-EU summit is due to take place in Brussels on April 9.