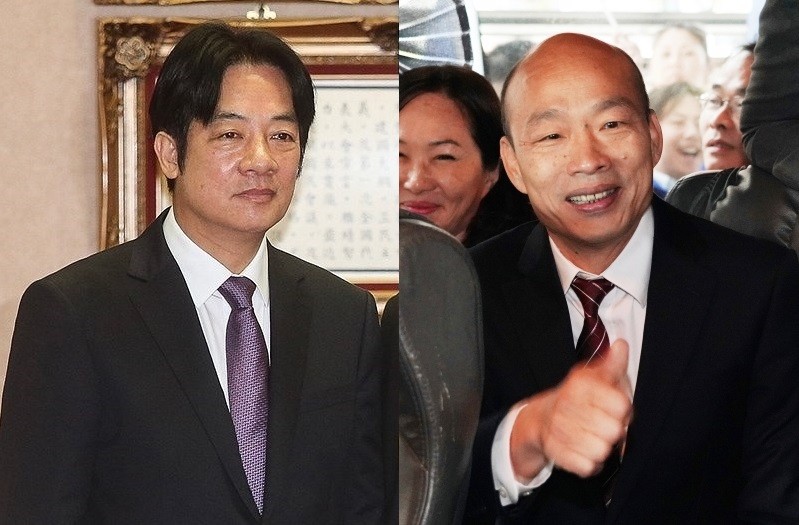 On Sunday (March 24), Lai admonished Han's meeting with Communist leaders in Hong Kong and Macau over the weekend by telling him to focus on selling agricultural products instead of himself. On Monday (March 25), Han struck back by comparing himself to the Monkey King and the DPP to Pigsy, prompting Lai to warn him of China's "Buddha Palm."

On Sunday, during Han's trip to Hong Kong and Macau, he met with the CCP's Director of the Hong Kong Liaison Office, Wang Zhimin (王志民) and its Director of the Macau Liaison Office, Fu Ziying (傅自應). That same day, Lai criticized Han's endorsement of the "one country, two systems" framework while meeting with Communist leaders by saying he should learn from Tainan fishermen and "sell agricultural products, not sell yourself."

The next day, Han struck back by telling reporters "Pigsy cannot sell ginseng fruit. But I, the Monkey King, am here to start selling. Why hold someone back? The eyes of the people are bright." Han was referring to himself as, the Monkey King (Sun Wukong, 孫悟空), the main character of the classic Chinese novel "Journey to the West."

He used the portly character Pigsy (Zhu Bajie, 豬八戒) to symbolize the DPP and implied that they lacked the skills of bringing new business to Kaohsiung, symbolized by the sacred "ginseng fruit" from the book. Han blamed the DPP for having sour grapes, "they can't get orders or find any access, so they are dishonest and sour." Tang Sanzang (唐三藏), is the wise monk that the Monkey King must follow on his journey to gather sacred sutras from the West in order to gain his freedom. In the book, the "Buddha Palm" represented the ever-present hand of Buddha that the Monkey King was unable to escape from when he rebelled against the Jade Emperor.

In this case, Lai is comparing the palm to the Chinese Communist Party (CCP) and is implying that he will ultimately have to answer to Beijing after swearing allegiance to it.

Lai stressed that during his past visits to Shanghai and Hong Kong, his itinerary was entirely transparent, and he publicly expressed his position of seeking common ground while recognizing the differences between the two sides of the Taiwan Strait. Lai wrote that in Han's case, his meetings with Communist officials in Hong Kong and Macau worried even local Hong Kong media which reacted by printing headlines such as "private meetings with China to acquiesce to 'one country, two systems,'" "Kaohsiung Mayor Han Kuo-yu sells out Taiwan," and "Selling out Taiwan is the first step in Han Kuo-yu's reliance on CCP to realize his presidential dream."

Lai said that many of his friends were puzzled when Han jokingly blurted out that "I can also choose the chief executive of Macau." Lai said he hoped that Han would attach importance to the promise he made to the citizens of Kaohsiung to make "politics worth zero points, the economy worth 100 points."

On March 18, Lai officially registered his bid for the Taiwan presidential race in 2020. Today, news broke that Kuomintang (KMT) Party Chairman Wu Den-yih (吳敦義) may soon invite Han to participate in the party's presidential primary, and his wife may be tapped to replace him as mayor.