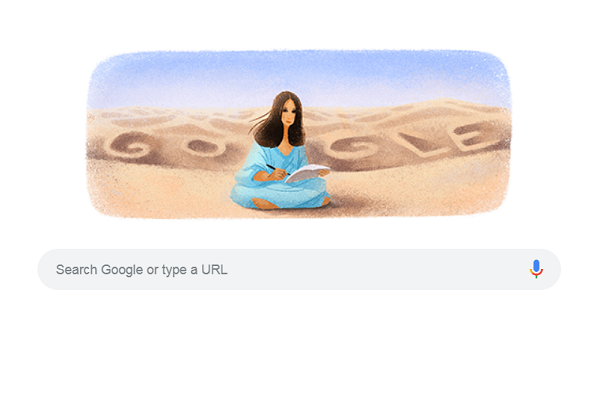 TAIPEI (Taiwan News) -- On March 26, Google Doodle honored the Taiwanese writer San Mao (三毛) with an illustrated image above the search bar on their home page.

San Mao is a celebrated travel writer, translator, and philosopher, who was born on March 26, 1943 in Chongqing, China, but relocated to Taiwan with her parents in 1949 at six years old.

Her birth name was Chen Mao Ping (陳懋平). In addition to “San Mao,” she also called herself Echo, and was known to some as Echo Chan.

After graduating from Taiwan’s Chinese Culture University, San Mao lived a life full of travel, romance, and tragedy. She has been called “Taiwan’s wandering writer.”

San Mao received a great deal of attention in the 1970s for her writings about her life experiences abroad in Germany and Spain, where she studied both of their national languages, and in northwest Africa, which was the back drop of her 1976 autobiography “Stories of the Sahara,”which launched her career as a writer. San Mao and her husband (Photo from online encyclopedia Alchetron)

She reportedly fell in love twice in her life. She was once engaged to a German teacher she met in Taiwan, but who died of a heart attack before they could be married.

In 1973, she married her Spanish husband, Jose, with whom she traveled in Africa, Spain, and the Canary Islands. However, Jose died unexpectedly in a diving accident in 1979.

After the abrupt loss of her husband, San Mao returned to Taipei, where she taught several years at her alma mater before devoting her time to writing and translating.

She published over 20 books in her lifetime, and also received critical acclaim for her 1990 screenplay "Red Dust" (滾滾紅塵), a World War II era drama about a lady novelist who falls in love with a man assisting the imperial Japanese forces. Decades after her death, San Mao remains one of Taiwan’s most widely read authors, recognized for her genuine voice, personal courage, and romantic descriptions of life as a wanderer.