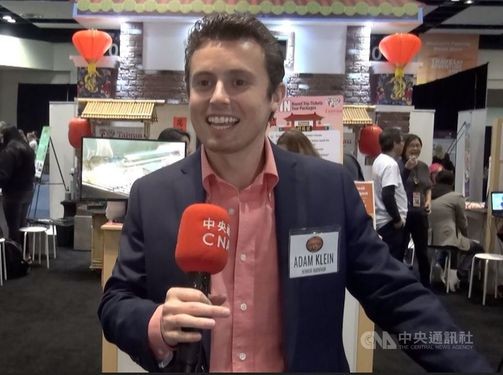 An American reality show celebrity promoted tourism in Taiwan and talked about his travel experience in the country at the annual SF/Bay Area Travel & Adventure Show (TAS) Sunday.

"The first night we went to a night market in Taipei where I tried food that I've never even heard of before," Klein said. "Honestly, food's probably my favorite part of the country."

"But I think what sets Taiwan apart is how welcoming the people are," Klein said, emphasizing Taiwan's attitude toward foreign nationals is "kind" and "generous."

"Every single person I met there welcomed me like I was family," Klein added.

Lin Yu-shan (林毓珊), head of Taiwan's Tourism Bureau office in San Francisco, said Sunday at the TAS that Taiwan is an ideal place to film adventure reality television series thanks to the island's rich natural assets.

The bureau is focusing more on trips to mountains, coastal areas and small towns to cater to the taste of nature-loving visitors, she added.

Meanwhile, the Taiwan booth at the TAS won the show's best booth award for the fourth year in a row with its diverse travel information, interactive games, special beverages and snacks.

The 2019 TAS was the ninth year the event has been held, taking place from Saturday to Sunday at the Santa Clara Convention Center in California.

According to the TAS official website, the event offered visitors a chance to "get great travel story ideas," "interview travel experts and show executives on travel trends."